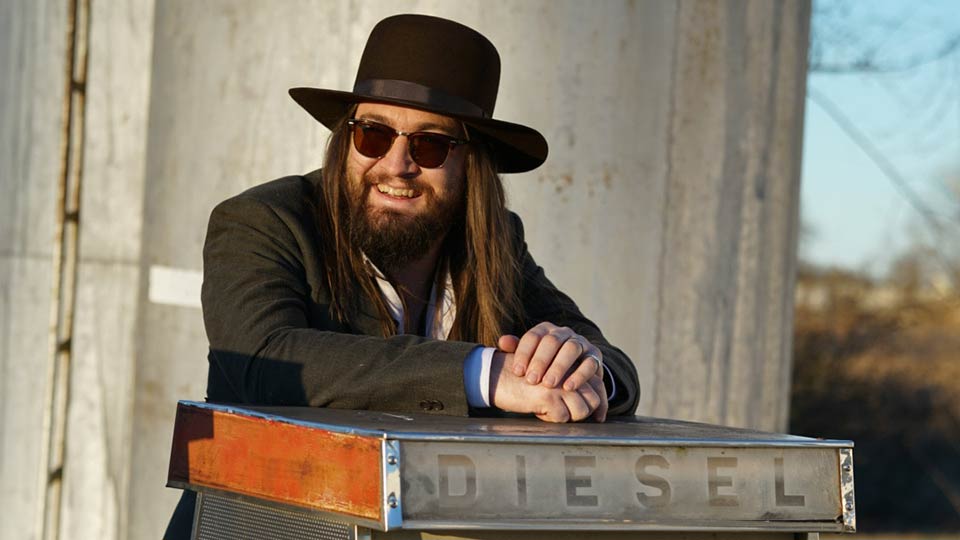 If any artist could be described as having lived a life resembling a country song, it’s Arkansas Dave. He grew up in a conservative Christian household, playing drums at his local church, and was a full-time musician by the age of 12. After moving to Austin for college and playing in bands, he toured with legendary blues musician Guitar Shorty. Earlier this year he released his critically acclaimed debut album and now he’s on tour in the UK, including an intimate performance last night at London’s Green Note.

Dave and his three band members arrived on stage last night around 8.30 PM and opened with Think Too Much. It’s a Southern rock-influenced number with a steady beat that recalls Lynyrd Skynyrd and shows off Dave’s soulful, deep vocals as well as a touch of gravel. I was also particularly impressed with guitarist Drew DeFrance’s riffs, which were a feature throughout (including one moment where he played with his glass of whiskey in hand!). The band then moved into a cover of Neil Young’s Are You Ready For The Country, which included a booming vocal from Dave and was greeted with whoops and cheers from the audience.

The two-part show featured a mixture of songs from the record and several cover versions, including a bluesy, sexy spin on the Rolling Stones’ Let It Bleed. a lively rendition of Johnny Cash’s classic Get Rhythm and the cheeky Meet Me With Your Black Drawers On. Dave also performed Tom Waits’ Chocolate Jesus, his first single, which started off with a sparse arrangement and steady, ticking drums before launching into wailing guitars and a funky groove. He sang every word with absolute conviction and you wouldn’t have known it wasn’t his own song. Another highlight was his version of Honey Bee, originally by Tom Petty, which had a dangerous edge to it and a huge note at the end.

However, many of the standout moments for me were Dave’s original tracks, which allowed him to show off his versatility. He went full-throttle on new song Gonna Get Burned (which he promised would ‘blow your socks off’ beforehand), the defiant, snarling Squeaky Clean, the swampy Bad Water and the Creedence Clearwater Revival-esque Bad At Being Good. That said, the slower songs like Diamonds, Come Back To Me and the mournful, atmospheric The Wheel really highlighted the rich tones in his voice due to their simple arrangements. This was particularly strong on Jubilee, which Dave wrote for his daughter and which was full of warmth and affection.

Throughout the set Dave had great vocal control, able to easily switch from a shout to a whisper and everything in between, particularly on What’d I Say. He also brought plenty of passion to his performance and could frequently be seen tossing his hair, jamming with Drew and even throwing in a few dance moves! He also frequently joked and chatted with the audience, praising that day’s protest against Donald Trump and telling stories about his songs, and encouraged them to clap and sing along. It was also great to see him and Drew bouncing off each other and it’s clear they love playing music together.

After thanking the crowd for their support and raising a glass to them, Dave and his band performed On My Way. It’s a blues-rock tune with plenty of twang and showed off Dave’s guitar picking as well as the power in his voice, plus some fantastic riffs from Drew. After the huge crescendo finish and demands for one more song from the audience, they played the heavy Down, which created a full-on blast of sound with plenty of depth and was received with an enormous cheer and volley of applause.

When I spoke to Dave recently he promised ‘good time rock and roll’, and that’s exactly what we got last night. It was a packed and varied set with great vocals and a fiery performance from Dave, plus some seriously impressive guitar playing from Drew and great chemistry between all four band members. I came away feeling like I’d seen something very special and can’t wait to see Dave back in the UK soon. If you’re a fan of high-energy classic blues and Southern rock, make sure you catch him on this tour!

See Arkansas Dave on tour in the UK this month: