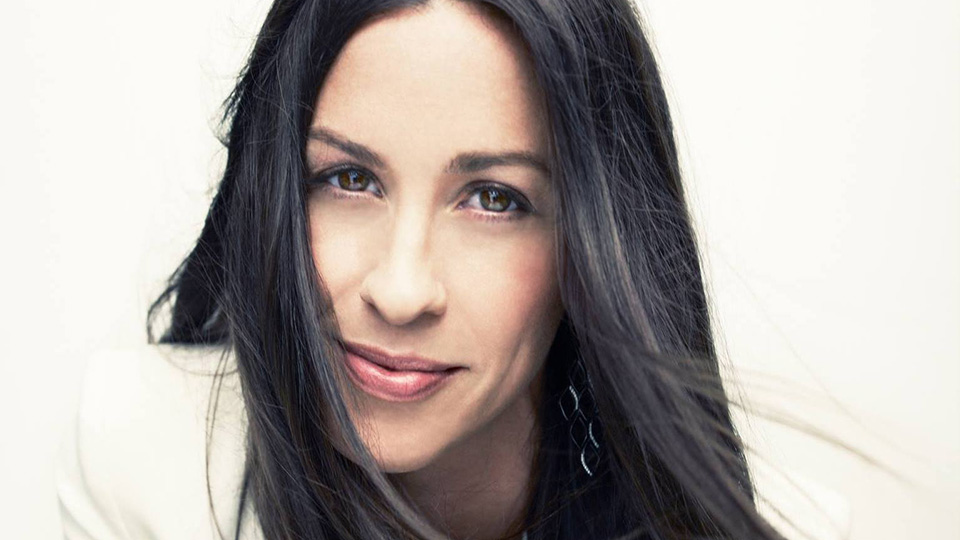 Singer-songwriter Alanis Morissette hasn’t been over to the UK for a while and it’s been 6 years since she released her last studio album Havoc and Bright Lights. With the promise of new music on the way, Morissette has made the trek over to do a headline tour including two dates at the Eventim Apollo in London. Tonight was the first of those and from the moment I stepped into the venue, you could feel the anticipation of the audience, helped in part as England went through to the World Cup semi-final earlier in the day and Pride had taken place in London.

Taking to the stage around 9pm, Morissette launched into All I Really Want, the opening track from her iconic album Jagged Little Pill. As she started singing the lyrics, the audience joined in and the show was pretty much a sing-a-long from start to finish. Watching Morissette perform is quite something. She always uses the entirety of the stage and she works her way back and forth throughout the song, expressing the music through the movements of her body. It’s actually mesmerising to watch her as she loses herself in the music, which she did completely during an encore performance of Uninvited.

The set list heavily featured cuts from Jagged Little Pill along with favourites from across her catalogue. It was definitely a crowd-pleasing set as the audience was very loud and interactive during the entire show. Forgiven was one of the early standout moments as Morissette competed with the audience, who knew every single word, ad-lib and vocal run. You could see from the look on her face that she was taken aback by the rapturous reception she received from the sold-out audience.

Woman Down, a song that felt very relevant given the current climate, continued the high energy of the show paving the way for You Learn. As the opening bars of that song started, the audience erupted and I could hear screams of delight right across the venue. Elsewhere in the set Morisette dedicated Everything, the lead single from So-Called Chaos to the audience, she strapped on a guitar for several songs including the fantastic Hands Clean, and she brought the house down with Ironic, allowing the audience to sing the majority of the first verse.

You Oughta Know was another moment that received a huge reaction and Morissette performed it with every ounce of passion she had. It’s a sign of a truly magnificent artist when they can sing a song they’ve done hundreds, if not thousands of times, and still sell it like it’s the first time they’ve performed it. Wake Up followed and Morissette left the stage after that before returning for a three-song encore.

As a treat, Morissette kicked the final part of the set off with London, a song that was demoed during the Jagged Little Pill era. She revealed that she’d never performed it live before but given that she was in the city, it made perfect sense to debut it. Uninvited was next and then Morissette closed her set with Thank U, encouraging the crowd to clap and sing along.

Having been to hundreds of concerts over the years, I can safely say I’ve never experienced one quite like this. Whether it was a reflection of the World Cup success or just a gathering of like-minded music lovers, the atmosphere inside the Eventim Apollo was absolutely incredible. With the exception of the song London, the audience sang every single word to every single song, and Morissette was positively beaming. She sounded magnificent, impressing with her powerful and distinctive voice. The show was without a doubt a triumphant return to the UK for the singer-songwriter and I’m already crossing my fingers that she’ll be back with new material and another tour before too long.