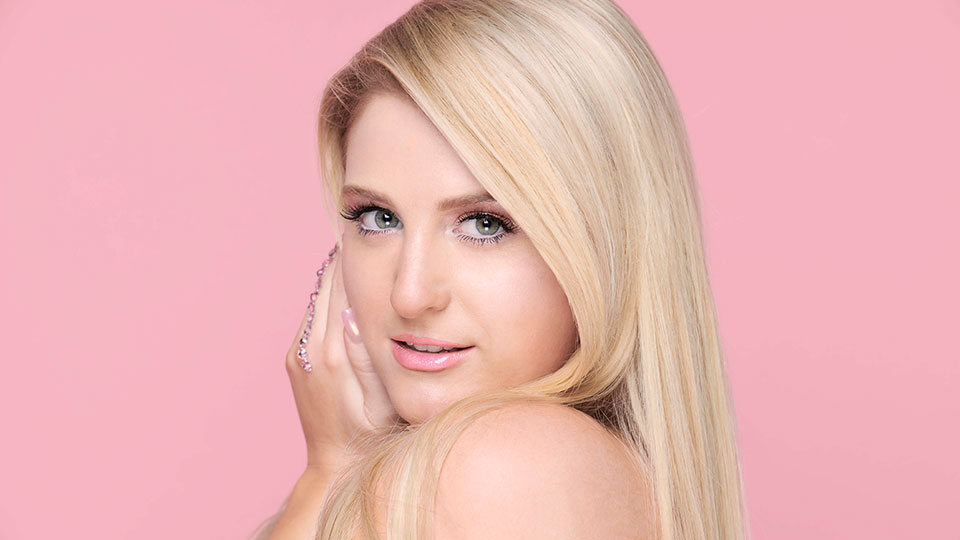 With her new album coming in summer, we have well and truly got on the M Train!

Today she reveals another track from her upcoming Treat Myself album and if you’re not already in love with her, here’s 5 reasons why you should be:

Nowadays, everything seems to be focused on being too cool for school, having a top dance producer or hip hop star guesting on your record and whilst I’m all for music progressing, I’d also like a bit of variety.  Pop music should be energetic, heartfelt and fun – Meghan ticks all three boxes and with her influences as wide ranging as Britney Spears to James Brown, doo-wop to jazz, her tracks always have that something extra.

Take Me Too as an example.

2. She’s proud of her curves

Meghan burst onto the music scene in 2014 with the cheeky All About That Bass which contains the line ‘I won’t be no stick figure, silicon Barbie doll’.  It set the scene for a popstar with realness and if you look at the album cover for forthcoming album Treat Myself she’s serving all those curves with sparkles to boot.

MY NEW ALBUM #TREATMYSELF IS READY FOR PRE-ORDER AND MY NEW SONG #AllTheWays IS AVAILABLE FOR DOWNLOAD on @AmazonMusic!!!!  https://t.co/BaAhnWvZE8 pic.twitter.com/jfph4yGn5m

3. She knows how to write darn catchy pop songs

Meghan is not afraid to roll up her sleeves, pour out her thoughts and her heart into her own music, but you might not know that she’s the pen behind songs for the likes of Little Mix, Jennifer Lopez and Fifth Harmony.  Have a listen to, what we’ve always thought was a missed single opportunity from Little Mix’s Glory Days; You Gotta Not co-written by Meghan alongside Johan Carlsson, Alexander Kronlund and Ross Golan.

As well as turning out the moves in the official video for No Excuses, Meghan also treated fans to a zumba dance routine video.  Of course it’s the not the first time we’ve seen dance routines, Meghan has delivered them in many of her videos.  Girl got moves!

5. She can play the ukulele

In 2013, Meghan had written All About That Bass with producer Kevin Kadish ( ) and after being declined by other artists, Meghan picked up her ukulele and headed to the offices of LA Reid at Sony Music and performed the track for him live.  As the story goes, she was instantly signed to his label.  Meghan recreated that moment just this week on her new US TV show The Four when challenged by DJ Khaled.

Meghan’s third album for Sony, Treat Myself is released on 31st August 2018 and she’s just dropped another taster of what we can expect with the summery All The Ways, which you can hear below.  It follows No Excuses, Let You Be Right and Can’t Dance and is setting up to be the pop album of the summer.

Listen to the All The Ways below:

Watch Let You Be Right below: