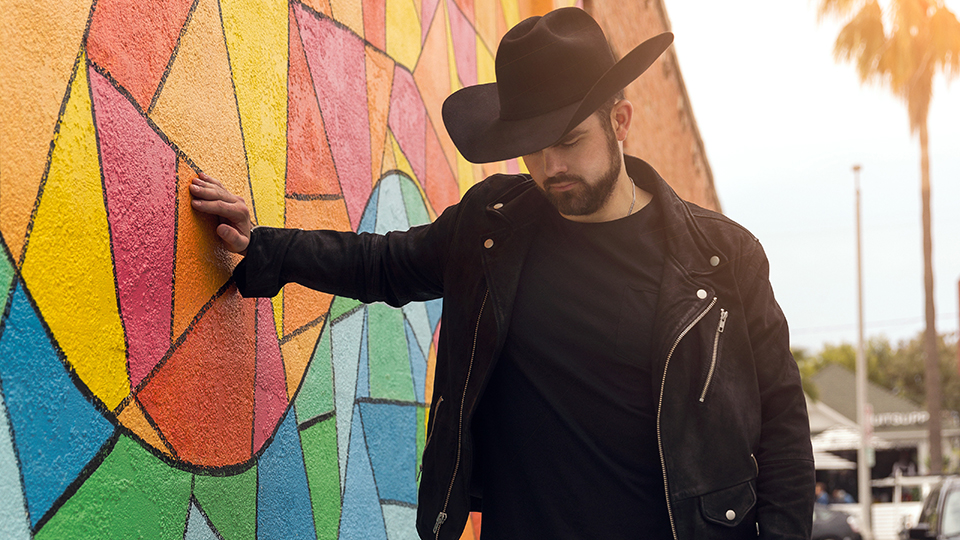 Originally from Arkansas, Denny Strickland was out on the road from the age of five showing horses. After teaching himself to play the guitar and write songs whilst at university, he released his debut single Swerve On in 2014. His first full-length album, California Dreamin, was released last year, and last night he played his debut UK live show at London’s Under The Bridge nightclub as part of Nashville Nights.

Strickland opened his set with Swerve On, which set the template for the rest of the performance. It’s a rocky, sexy track with some great lyrical details and showed off the drawl in Strickland’s voice really well. Throughout the song he was engaging with the audience, giving fist bumps and high fives to the front row and encouraging them to put their hands in the air, and it certainly helped to get them fired up.

Throughout his hour-long show Strickland drew on a variety of musical styles, from the poppy touches of the driving Get A Grip to the hip-hop vibes of Slo Mo and the stomping Every Time I Close My Eyes with its almost rapping delivery. One particular standout moment was Damn Babe, which for three minutes made a club of 500 people feel like the O2 or Wembley and showed that Strickland has potential to succeed on the biggest stage. I also really liked the twangy Outlaw Woman, which saw Strickland playing guitar and brought out the depth and soul in his voice.

One thing that struck me about Strickland’s set was that he’s an incredibly expressive and confident performer. Frequently he looked like he was completely lost in the music, particularly on the slower numbers. We Don’t Sleep and Every Time I Close My Eyes were full of passion and raw emotion and two of the highlights of the set for me, alongside the atmospheric, lonesome Five Degrees with its classic rock influences. However he also showed off his fun side, breaking out some funky moves on Whatever and even taking a selfie with a fan during Robbed The Bank! That confidence and swagger had the crowd eating out of the palm of his hand, and they rewarded him by chanting his name after the sultry, pulsing How Far You Wanna Go.

Strickland closed his set with the slinky, laid-back Don’t Ya Wanna and the Thomas Rhett-esque Gimme Some Of That before launching into his current single, California Dreamin’. For me it was a great combination of vivid imagery, rock influences and Strickland’s vocal, which took on more of a gravelly edge. By the end the crowd were singing along to the anthemic chorus and it was clear from the conversations I overheard afterwards that Strickland had won over tons of new fans.

Overall Strickland delivered a slick, entertaining performance which balanced more uptempo numbers with slower tracks and definitely got the Nashville Nights party started. He’s got a great tone to his voice and a fantastic stage presence, and I liked that the set showed off hidden depths in his songwriting too. There were a couple of moments where the show was perhaps a bit short on energy, but overall it was a great introduction to the UK country scene for him and given the enthusiastic reception he got I’m sure he’ll be back soon.