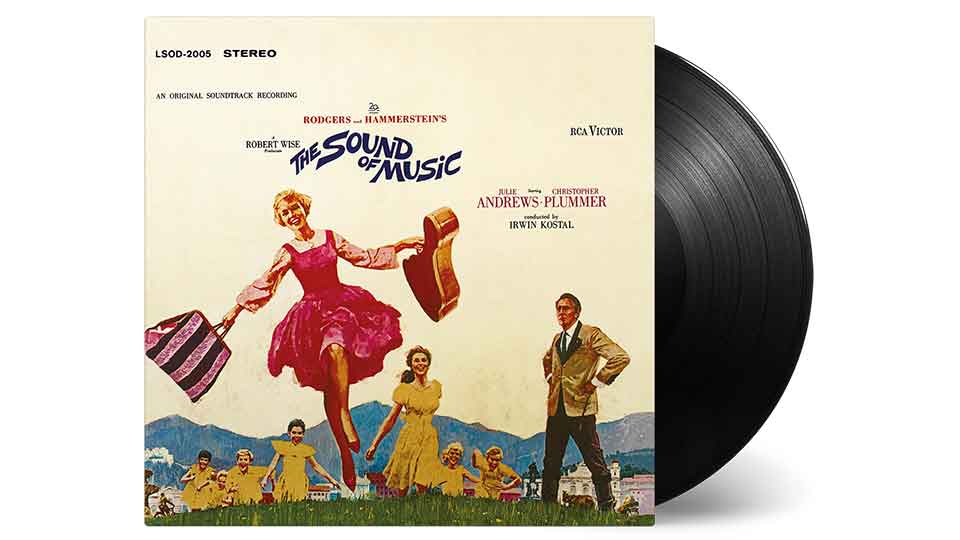 When it comes to musicals on film, The Sound of Music is considered to be one of the finest. The highest-grossing film of 1965, The Sound of Music wasn’t a critical hit initially but it found a very willing audience. Based on The Story of the Trapp Family Singers by Maria von Trapp, the film was adapted from the stage musical by Richard Rodgers and Oscar Hammerstein II and it starred Julie Andrews, in a career-defining role, alongside Christopher Plummer, Richard Haydn and Eleanor Parker. The Sound of Music tells the story of Maria a nun-in-training whose behaviour gets her removed from the nunnery and sent to governess the seven children of a retired naval captain.

The soundtrack has become as iconic as the movie and to date has sold over 20 million copies worldwide. Recently Music on Vinyl reissued the classic soundtrack, originally released in 1965, on 180-gram vinyl. Featuring all of the tracks from the initial release, The Sound of Music comes packed in a protective PVC sleeve. There’s an 8-page booklet included featuring biographies of Andrews and Plummer, a feature of Rodgers and Hammerstein and a selection of pictures and key moments from the movie.

Even if you’ve never seen The Sound of Music before, you’ll likely know most of its songs. The soundtrack was the final collaboration of Richard Rodgers and Oscar Hammerstein II, with Hammerstein passing away years before the film was even released. The first side of the record opens with Prelude and The Sound of Music sung by Julie Andrews. Her voice is so pure and it’s no wonder she’s had the success she has in musical theatre. You can’t help thinking of Maria twirling around on the Austrian hills as you hear the piece.

There are so many classics spread across the album, most of which belong to Julie Andrews’ character Maria. My Favorite Things, a song that has been covered by many artists including Kelly Clarkson and Carrie Underwood, is a highlight and one of the film’s best-known moments. For me the standout on Side A is Climb Ev’ry Mountain, which is performed by Peggy Wood who played Mother Abbess. It’s a soaring, powerful and inspirational moment that sends chills down your spine.

Side B opens with The Lonely Goatherd, a song that was more recently sampled by Gwen Stefani on her hit Wind It Up, and it’s the first moment of yodelling. The art of yodelling has always been a divisive one but I’m pretty fond of it to be honest. Other highlights on Side B include Do-Re-Mi sung by Maria and the children, Edelweiss and So Long, Farewell, which always makes me think of the BBC Andrew Lloyd Webber series How Do You Solve a Problem Like Maria?

This 180-gram pressing of The Sound of Music sounds stunning. The quality is far superior to any other release of the soundtrack I’ve heard and it really brings to life the luscious instrumentation and energy that Rodgers and Hammerstein drenched their compositions with. It breathes new life into the soundtrack 53 years after its original release.

There’s no doubt about it, The Sound of Music is an absolute classic and the soundtrack is one that will live on for decades to come. For their final collaboration Rodgers and Hammerstein knocked it out of the park and they gave Julie Andrews material that has stayed with her throughout her remarkable career. Music on Vinyl pay so close attention to their releases and this is a real treasure for fans of musical theatre and of course The Sound of Music.

Advertisement. Scroll to continue reading.
In this article:Music on Vinyl, The Sound of Music