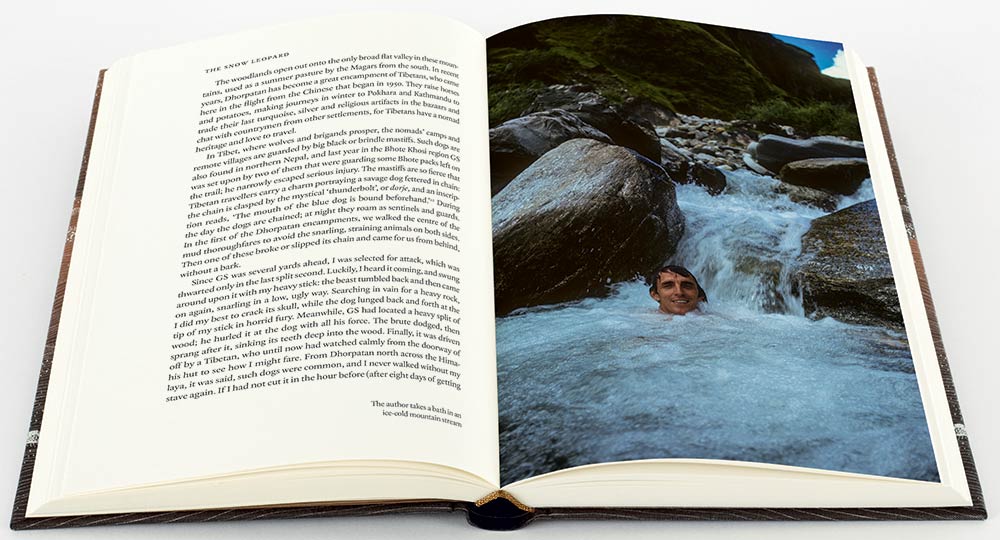 Peter Matthiessen’s The Snow Leopard, now released in a stunning new edition by The Folio Society, is an acclaimed travel book first published in 1978. In it, the author and narrator recounts a trek across the Himalayas, in part to look for the elusive snow leopard, barely seen by human eyes.

Is it a guide to Nepal and Tibet, or a personal diary/autobiography, or even a westerner’s introduction to Buddhism? Well, possibly all three genres combined. There are also elements of the kind of derring-do explorers such as Ernest Shackleton made the stuff of legends, but without finding uncharted territory and extreme privations.

Reflecting on his life and achievements, Peter Matthiessen, who died in 2014, was a fascinating character who packed a lot into a long and adventurous life. He was also a fine writer. His 1973 expedition with field biologist George Schaller (referred to as ‘GS’ throughout) was good source material for a book, and considering that the chapters are headed by diary entry dates, and the book split into different parts of the journey, it’s likely that The Snow Leopard was based on diaries he kept at the time of the expedition. It certainly reads that way; there’s an immediacy to the text, and a freshness that evokes the clear, icy air of Tibet. But ultimately, how much you enjoy the account will hinge upon how engrossed you become in the two journeys the author simultaneously takes – the physical one and the spiritual one.

Lovers of spirituality, nature and Eastern mysticism, who may themselves partake of the occasional chant of ‘Om Mani Padme Hum’ will derive a lot of pleasure and intellectual stimulation from this book. Visiting the monastery at Crystal Mountain, spending time with monks and Sherpas and becoming steeped in their way of life will delight younger readers looking for tales of how to find yourself, as well as older hippies who remember the tail end of flower power as the 1970s came to an end.

For the more cynical reader, there is a lot of repetition in the text – journeying through the Himalayas is, after all, fairly unvaried – food, weather, hardship, topography, physical toll – all of these things are essential to the traveller’s survival, but despite Matthiessen’s skill at creating a strong sense of time and place, they become routine after a while. There’s also the feeling that the book isn’t about a quest, but more the journey being the goal rather than the destination. The reaction the reader has upon arriving at this knowledge will determine whether or not they will embrace the spirit of the story.

Even the more world-weary reader will enjoy elements of the bromance the author has, first with the near-silent ‘GS’, whose seemingly hostile manners Matthiessen intelligently reflects upon, and later with Tukten, his Sherpa porter down the pass at the end of his journey. Touchingly, there are memories too of his late wife, Deborah (‘D’), including an account of their initial courtship, and letters from his son Alex, who provides a moving introduction to this edition. There are other flashes of description that stand out in the book too, such as a beautiful, crippled beggar girl – a reminder of the extreme poverty in Nepal – who approaches the author, all smiles, towards the start of his account.

For the right readership, The Snow Leopard will prove a very special book with profound significance. In more politically dangerous times, a journey to Crystal Mountain accompanied by Himalayan blue sheep is a welcome relief from the insolvable problems facing the world. This edition has twenty previously-unseen full colour photographs reproduced from the original 1973 expedition (spread over ten two-sided plates) and inside the hardback, a map of the route Matthiessen took is reproduced. It is produced to a very high standard, and the hardback is housed in a protective card case.

In this article:Peter Matthiessen, The Folio Society, The Snow Leopard