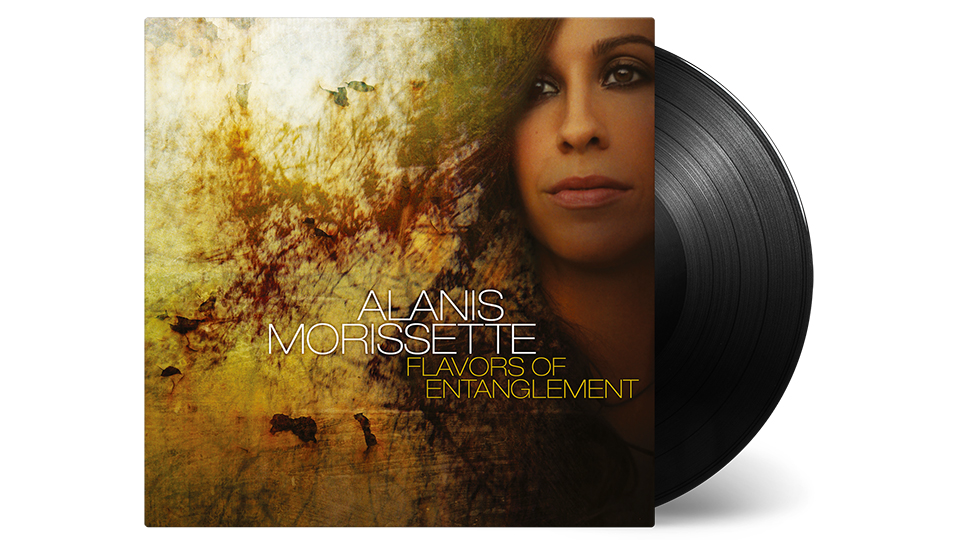 Being an Alanis Morissette fan can be a frustrating business. The singer-songwriter, who has been in the music industry since the 80s, is often associated only with her 1995 breakthrough album Jagged Little Pill with little attention given to the rest of her catalogue. While it’s true that Jagged Little Pill is her biggest-selling album to date, that doesn’t mean the rest of her catalogue isn’t worth delving into and spending some time with. Music on Vinyl recently released Morissette’s seventh studio album, the very underrated Flavors of Entanglement, which was originally released in 2008 on CD and digital formats.

For its first outing on vinyl, Flavors of Entanglement has been given the 180 gram treatment and if there’s any of Morissette’s albums that deserve that level of care and attention, it’s this one. Flavors of Entanglement saw Morissette really experiment with her sound by pushing the boundaries of what she was known for. Often lazily labelled as a ‘man hater’ due to the content of Jagged Little Pill (she’s not by the way, she just had a bitter break up) Morissette’s later work has been brushed aside by critics.

Opening with Citizen of the Planet, Flavors of Entanglement starts off in familiar territory. The Middle Eastern sound of the track marries with rock, and it’s a rousing way to start off the album. Where things really start to get interesting is on the electronic pulse of Straitjacket. Under the guidance of producer Guy Sigsworth, Morissette incorporated loops and beats into her music and it’s a really interesting listen. It also moves her far away from the rawer sound of her earlier work.

The further you get into Flavors of Entanglement, the more surprises you uncover. Morissette sings a low, steady tone on the drum’n’bass driven Moratorium, catches you completely off-guard on the gorgeous piano ballad Not As We, and adds pop/rock melodies to the dreamy Giggling Again For No Reason. One of my favourite moments is on the crunchy synth-driven Versions of Violence, which takes the sound of 1998’s Supposed Former Infatuation Junkie and gives it an industrial makeover.

What’s so wonderful about this 180 gram vinyl edition of the record is that you can really hear the depth of the production. CD and digital can sound lifeless due to the amount of compression used but Flavors of Entanglement is given room to truly breath on vinyl. Sigsworth’s production is very intricate and you can hear every single layer, to the point where it feels like you’re truly hearing some of these songs for the very first time.

The release also comes with a full-colour four-page insert featuring all of the lyrics and the artwork from the original album.

I would say that Flavors of Entanglement is the most under-appreciated of all of Morissette’s albums. She truly strived to do, and in my opinion achieved, something different. There are moments that remind you of Morissette’s earlier work but there is a lot of forward-thinking music contained on the album that was way ahead of its time. It’s interesting to note that 10 years on from its original release, a lot of the album sounds very modern. It’s another example of Music on Vinyl giving superb care and attention to an album that really deserves a wider audience and this could well be the definitive version.

Track listing: Side A 1. Citizen of the Planet 2. Underneath 3. Straitjacket 4. Versions of Violence 5. Now As We 6. In Praise of the Vulnerable Man Side B 1. Moratorium 2. Torch 3. Giggling Again For No Reason 4. Tapes 5. Incomplete Record label: Music on Vinyl Release date: 16th March 2018

Advertisement. Scroll to continue reading.
In this article:Alanis Morissette, Music on Vinyl