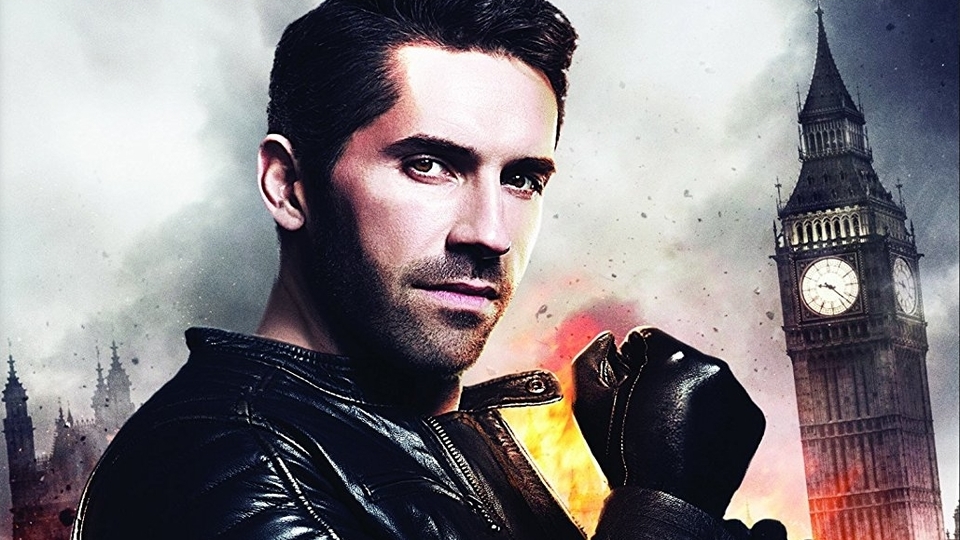 Scott Adkins has been a name you can trust in the word of action movies for quite some time. His latest project is Accident Man, an action-thriller available on Digital Download and DVD from Sony Pictures Home Entertainment on the 16th April.

Based on the underground British comic Toxic! by Pat Mills (creator of the Judge Dredd comic) and Tony Skinner, Accident Man is a darkly humorous and stylishly violent adaptation with Scott Adkins (Doctor Strange, The Expendables 2) playing the title character, a stone-cold killer who must face off against a rogue’s gallery of ruthless assassins in order to uncover the truth about his ex-girlfriend’s murder.

We got to chat with Scott about the movie, his thoughts on the best action & martial arts films of all time and his future projects including Triple Threat, the massive and eagerly-anticipated extravaganza pairing Adkins up with screen legends Michael Jai White, Tony Jaa and Iko Uwais.

Mike Fallon (Scott Adkins) is the Accident Man – a stone cold killer and the best at what he does. But when a loved one is dragged into the London underworld and murdered by his own crew, Fallon is forced to rip apart the life he knew in order to avenge the one person who actually meant something to him.

How did you first get involved with Accident Man?

When I was about 14 I got the comic book and I was a big fan of it. I kept hold of it all this time, even though the dog ate some of it and I sellotaped it back together, always hoping that maybe one day I could make the film and play Mike Fallon. But I always thought to myself, well, you’ve got to become a star first, become famous and then you can get the film made. What I now know is there were a couple of big time producers that optioned it and wanted to make it. It didn’t work out, lucky for me.

I actually started writing the script before I optioned the property, just as a little experiment. Eventually out of necessity I optioned the property myself, paid for it with my own money. Within a year, I had the finance for the movie. We had Sony on board, the script was written and director in place. Here we are just as the film is being released. It’s a lifelong ambition really. If you could’ve said to me, “Scott, you can make any film. What’s it going to be?” I would’ve said Accident Man.

This film is a classic throw-back to action films of the past which don’t seem to be as prevalent as they were in, say the 90s. Why do you think we as audiences love to see tales like these told onscreen?

Well I’m a big fan of those movies, that’s what i grew up on and because I’m the type of actor that’s very physical and can do the stunts myself my films tend to have that feeling because I can actually do it, I’m the real deal, no CGI, wires, just good old fashioned Chuck Norris stuff. I can only hope that the audience is like me and wants to see more of this type of thing because I certainly do. I miss it. Too many people running around in silly costumes for my liking.

Humour is played out really well in the film. Did you relish the chance to play that side of things on Accident Man?

I did enjoy it but it was also very necessary. We are dealing with a lead character who is an assassin and as long as the money is right he will kill you so without the humour we would have had a pretty bleak dark movie so we absolutely needed it. It’s very much my sense of humour, its not for everyone but if you are a fan of Monty Python, Bottom and Jackass you will most probably enjoy it.

Mike Fallon is a really interesting character, what traits do you share with him? And would you consider revisiting the character for another adventure.

Mike Fallon is a sarcastic arsehole so maybe I share that in common (laughs). He’s a pretty despicable character to be honest but i love anti-hero’s and I believe that as long as you make that character interesting or charming then no matter how much of a bad guy he may be, as long as you mount the obstacles against him and make his enemies more despicable then the audience will go along for that ride. Everyone loves a bad ass anyway. We absolutely want to do Accident Man 2 so I hope people will support the film by legitimate means so it can turn a profit and let us do another.

What is your favourite scene from Accident Man, and what was the most demanding one to shoot?

The fights are always very demanding, its not easy to do but I love seeing the finished product. I love the opening in the bar, its a great introduction for a lead character, not your everyday night in the pub.

Wearing two hats on Accident Man, what was it like to write and star in the same movie? And can we expect more from you as a writer in the future?

I didn’t have to learn the lines because I kind of already knew them from the writing stage but aside from that it was all the same. Its very gratifying to hear your words being spoken by the other actors too, especially if its Ray Stevenson, who is a powerhouse and sure a great actor, I really enjoyed working with him on this. I’d like to write more but I do find it tedious. Its better for me to team up with a partner and do it. I’m more of an ideas man.

Your career has always demanded a lot from you physically. From your standpoint, did this project, which sits as an action and a comedy, require a different style of preparation from you compared to your other, more traditional action roles?

The action is the action and I’m required to be in great shape all year round for that. I love to train, I love martial arts so thats not a problem to get motivated for that. What we wanted to do with the comedy was not try to be funny like Jim Carrey or Will Ferrell, who you could no way compete with anyway, but just to play it straight and find the comedy in the situation. The humour is very dry and British so the more truthful we made it the funnier it was I think.

What film genres would you like to tackle next (that you haven’t tried yet)?

I would absolutely love to be in something like a King Arthur film and play a Knight. That time period has always fascinated me. Would love to do a western also.

We are super-excited about Triple Threat and can’t wait for that to land. What can you tell us about that film and also working alongside great talents like Michael Jai White, Tony Jaa and Iko Uwais.

Michael I’ve known for over a decade. he’s a fantastic guy and an incredible martial artist. He’s a good friend who helped me out on Accident Man, we were very lucky to have him. I’d wanted to work with Jaa since I saw Ong Bak and it was an absolute pleasure to square off against him and test my metal against him. He’s a humble and very sweet human being. Iko is a really good laugh. He’s constantly making dirty jokes and he’s very funny to have around. The film is a martial arts movie dream for fans and I think they will love it!

What are your top three martial arts films and top three action films of all time?

Top martial arts films – Enter The Dragon, The Raid, Fist of Legend. Top action – Predator, First Blood, The Matrix. That is so difficult to just name 3.

Many believe that we are in a golden age of TV right now and that it has overtaken Film. What do you think about where TV and Film are as mediums today?

TV is so good now because its much riskier than it used to be. It’s much more adult and refined plus you hang out with the characters for a lot longer so the stakes feel higher. But I think there’s still many great films around. The mid-tier projects have been swallowed up by TV. Personally I still prefer film, I like to invest for 2hrs and then get out and come back in to see something else.

Can you tell us about your future projects?

I have another film with Accident Man director Jesse Johnson coming out in the summer called The Debt Collector. It’s more of a character-based action film with a very good story. It’s about a classical martial artist who is down on his luck. He has a gym he’s about to lose, it’s about to be taken over. He needs money fast. One of the guys he trains is a debt collector and he keeps begging him, “Give me some of this work. I need something to stop the gym from going under.” The guy’s like, “Listen, you’re a good fighter but you’re a nice guy. It’s not for you.” He’s like, “No, please, give me a chance.” Really it’s about his first weekend as a debt collector and his descent into the underworld and how the whole thing just goes to sh*t. It’s with Louis Mandylor who I had a great time working with. Of course, Triple Threat with all the best martial artists in one movie together, people are going to enjoy that.