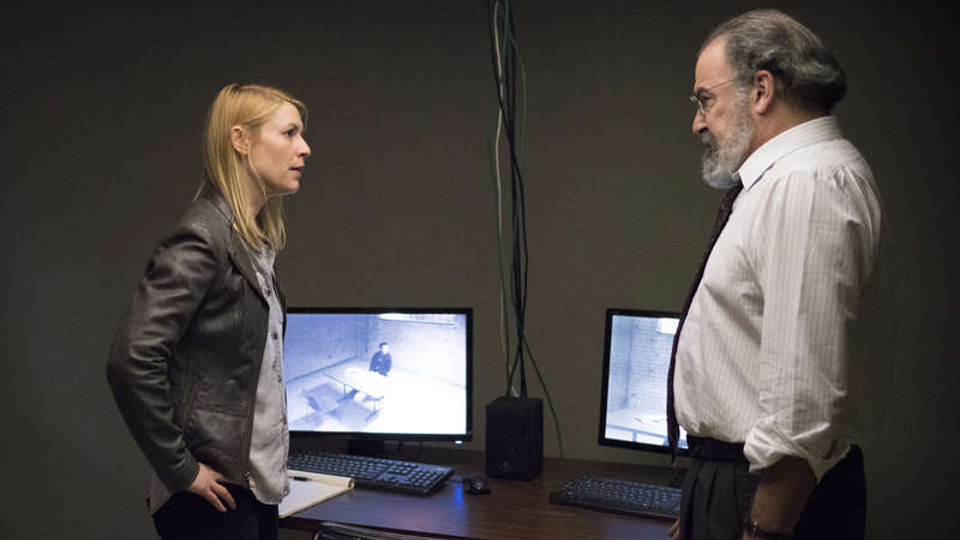 On the latest episode of Homeland, Saul (Mandy Patinkin) attempted to take control of the situation.

The episode opened up, where the previous one left off, with Carrie (Claire Danes) and her team looking through Dante’s (Morgan Spector) apartment while he slept. The team took photos and downloaded the data off his PC hoping to find a shred of evidence against him. Suddenly, Dante sat up and looked around before falling back asleep. Or was he just pretending? Either way, Carrie gave the signal and they had to leave with the little they had.

After leaving Dante’s apartment in a hurry, Carrie left Max (Maury Sterling) to dig into the information they recovered. Carrie then headed home where she had a huge argument with her sister Maggie (Amy Hargreaves) about her recent behaviour. Maggie and her husband were sick of the problems. Carrie saw red, grabbed Franny and left.

Carrie tried to take Franny to a motel where she planned to stay while she figured things out. Unfortunately her credit card was declined so she couldn’t afford to pay for a room. Instead, they left and Carrie took a call from Dante. He wanted to know what had happened the night before and if they had slept together. Carrie said he’d passed out and assured him that if they had slept together he’d remember it. She told him about her bad day and he suggested she and Franny came to his.

At Dante’s apartment, he cheered Franny up by having her help him make pancakes. He then headed off to work and said they could stay. After he left, Carrie pretended to tidy up while having a snoop around. Franny found a photograph book and it contained photos of Dante and his ex-wife. Franny asked why they split and Carrie thought that was an excellent question.

Carrie then made contact with Dante’s ex and posed as FBI to ask her some questions. She revealed certain information that seemed to confirm Carrie’s suspicions about Dante. In particular, she denied that they split up because of his drinking. She also revealed that Dante was previously somewhat obsessed by Carrie.

Meanwhile, Dante stopped by Maggie’s house to collect some clothes and items for Franny. While he was there he took an opportunity to have a snoop in Carrie’s room. He found information showing she had looked into him.

Elsewhere in the episode, Saul went to see David Wellington (Linus Roache) at his home to quiz him about Simone Martin (Sandrine Holt). Saul told the truth and said he believed Wellington was innocent. However, Martin was due to testify for immunity and Saul needed his help in stopping it. Saul explained how they thought that Martin was actually a Russian agent and part of an operation to take down the government.

Saul’s next move was to go after Max and force him to work as part of his task force with Sandy (Catherine Curtin) and Clint (Peter Vack). Max had no choice and Saul set him to work on going through Dante’s hard drive data. He eventually discovered that Dante and Martin had recently been in the same areas five different times. Saul tried to get access to Martin for questioning before the upcoming trial but was denied.

Wellington handed in his resignation but Keane was having none of it. She personally visited his home to turn it down and said she needed him.

At the end of the episode, Carrie put Franny to bed at Dante’s apartment. The paid then traded questions about each other. Instead of going bad the pair ended up naked on the sofa having sex. Outside, Saul and his team were preparing to enter. He’d asked Carrie to keep out of the way of Dante but as she hadn’t listened he had no choice. He gave the word and his team raided the apartment. A naked Dante was cuffed and taken away. Saul stepping in, glared disapprovingly at Carrie and walked off.

Check out the Homeland 7×08 trailer below:

Carrie and Saul interrogate a suspect. Wellington makes a play.