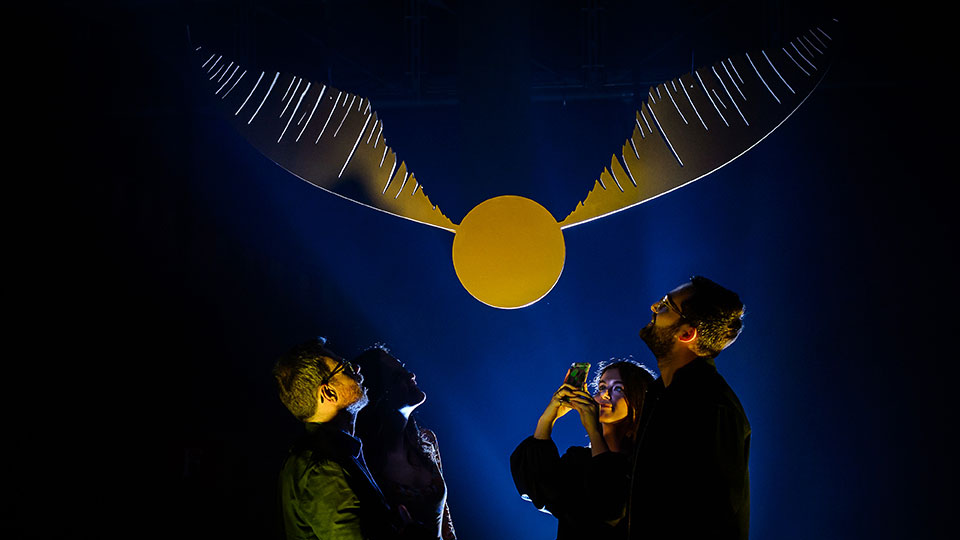 Quidditch Through the Ages was launched last night at the breathtaking London Symphony Orchestra venue, St Luke’s – which proved to be the perfect ethereal setting to host it. Narrated by the talented Andrew Lincoln, Quidditch Through the Ages dances with life. Some of the 200 crowd in attendance last night were competition winners, and they got the chance to walk down the red carpet to the venue, and to get up close and personal with some of the props from the films. The props on display included: Nimbus 2011 – as used by Tom Felton as Draco Malfoy in the Harry Potter and the Chamber of Secrets; Bludger & Bat – as used by James and Oliver Phelps as Fred and George Weasley in Harry Potter and the Philosopher’s Stone; and the Golden Snitch as used by Daniel Radcliffe as Harry Potter in Harry Potter and the Deathly Hallows.

Listening to J.K Rowling’s work made me realise just how utterly amazing she is. Yes, we all know that the books are incredible, but sometimes, when you’re so swept away with the storytelling, you forget how much work has gone in to every aspect of every book. Her imagination in unlimited and unlike the movies, the audio book forces your mind to run away with itself and to create visuals – bringing the story to life in your mind.

We were seated in a 360 degree setting, around a small green circular stage. The backdrop included LED lights that shone and flickered and a backdrop of the characters playing Quidditch – flying high on their racing broomsticks. It made me think of the Coliseum in Rome, peering down from a circular high position. Only this time, there was nothing to see on the stage, and out sensed were focused on the sound, which was enhanced by the added ambience of the room. It was fascinating to see the Quidditch Timeline up on the wall – documenting in detail, every moment of its fictional history.

Garry Haywood, Co-Founder at Kinicho, said: ‘Working with this exceptional audio gave us a fantastic palette to enter the magical sonic reality of the Wizarding World. Being able to build the biggest system of its kind ever used in UK, using the latest, bespoke 360-degree sound experience aural technology that we’ve created, resulted in this once in a lifetime audio experience that we’re delighted the public got to enjoy.’

Laurence Howell, Director of Content at Audible UK, said: ‘We’ve always known that audio has the ability to let listeners completely lose themselves in a story. This event takes that listening experience to the next level. The soundscape that Pinewood and Kinicho created for our event had guests ducking and diving to avoid Bludgers and broomsticks as they hurtled past. The room was buzzing with energy and excitement – you really felt transported to the sidelines of the 2014 Quidditch World Cup. I hope listeners enjoy this new audiobook as much as we’ve enjoyed making it with Pottermore. Both Andrew’s narration and the highly detailed sound design really let you immerse yourself in this richly imagined universe.’

If you decide that you must get your hands of a copy (and I suggest that you do), the great news is that Pottermore is donating a proportion of the proceeds from the sales to Comic Relief, and J.K. Rowling’s own charity Lumos.

Quidditch Through the Ages is available to download now at audible.co.uk/quidditch and pottermore.com/shop.