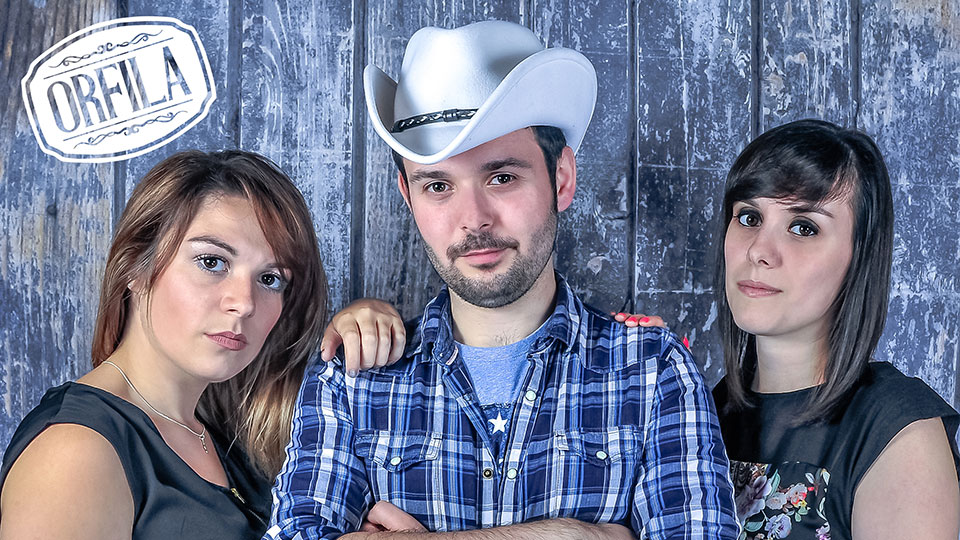 Since they formed in 2012, Kent-based family trio Orfila have been building up a reputation as one of the leading bands on the UK country music scene.

With two albums and appearances at C2C festival in 2016 and 2017 under their belt, they’ve been recognised for their harmonies, songwriting and stage presence. Their latest EP, Built With A Dreamer’s Hand, was released in January 2018.

I recently caught up with Matt from the band to talk about their new single Raise A Glass, their experience of playing C2C and what would be on his career bucket list. Read on to find out more…

Well, we mostly play country music, and we try to make our songs quite relatable and energetic, I guess. We just try to sort of appeal to a range of people, so although we’re country and we have that country backbone going through our music, we also have different genres. So for example some of our songs are quite rocky and quite bouncy, some of them are a bit more laid-back and slightly more folky or poppy. So we try to be a bit more diverse, I guess.

You’re about to release your new single Raise A Glass – can you tell us more about that?

Yeah, Raise A Glass is actually about our grandfather who passed away while we were writing the album. We got back from the funeral and were sort of a bit deflated, and me, Lou and Abi just sat round and we said ‘well why don’t we just write a song and see if anything comes out?’ Because writing a song sometimes is a good way to deal with stuff if you’ve got something on your mind – sometimes it’s a good way of putting it out there. So that’s what we did and we sort of had everything fresh in our minds, how we were feeling, and we just put it down on paper. It was quite a cool process because we don’t often write with the three of us all at the same time, but within a couple of hours we had this song that was quite personal to us. But we wanted to make it a song that a lot of people can relate to. It’s not specifically about us and our family, it’s about loss in general.

What’s your typical writing process like? Is it quite observational?

It tends to be a different range of things that we write about. Usually I’d say it’s probably about our own experiences or experiences of people that we know, or things that we want to get off our chest. In terms of whether we write together or individually, we do write a few songs together – we’ll sit down and actually write stuff together. But a lot of our songs are written individually – either one of of us or maybe two of us – and then we’ll take the song to the rest as a group and fine-tune it together. So I might have a song that I think ‘yeah, I’ve finished this one’ and I’ll take it Lou and Abi and they’ll say ‘oh why don’t you change this bit here?’ or ‘why don’t we put a bridge here, or make this vocal line slightly different?’ So in the end it’s quite collaborative however we write, but that tends to be the kind of approach we use.

Oh, that was amazing. C2C was something that we always wanted to play at. We’d applied through the sort of usual channels and we’d never really gotten anywhere until 2016 when we won a competition set up by Yamaha – I don’t know whether you’ve heard of it but it’s an open mike competition over four weeks where there was an event at Yahama Music London featuring four country acts. So 16 acts all together. There was a voting process and whoever won the best act got to play at Country to Country. That’s how we got on in 2016, because we won that competition and that was amazing. We sort of found out about the competition at the last minute and we were invited up only a couple of days beforehand. We thought ‘oh it’d be cool to play up there and do this gig’ but we never really expected to win. But it was amazing in terms of going to C2C.

The following year we applied through the normal channels and we got on that way. That was really cool because we were massive fans of the acts that were playing – I’m a big Brad Paisley fan, so to see the posters with him headlining and then us on the other stages on the same line-up at a festival was pretty amazing.

Are there any plans to go back this year?

We’re not actually playing this year, but we will possibly be going up anyway because it’s got quite a good line-up and we know some people that are on the bill. It’s always a really good weekend anyway so even though we’re not actually playing this year we still want to go and be a part of it and experience it really – it’s like country Christmas!

I’ve heard a few people describe it like that…

I thought I was being unique! [laughs]

Tell us about your latest EP, Built With A Dreamer’s Hand…

Built With A Dreamer’s Hand is sort of a celebration of the band. Last June was the five year anniversary of us coming together as a band and we thought we wanted to release something to commemorate that. It had only been a year and a half since we released the album. We’re always writing and we do have enough stuff for another album but it’s a very long and costly process. So we thought ‘well we’ve never actually done an EP, so let’s pick the best songs that we’ve written since the last album came out and release it as a three-track EP’, so that’s exactly what we did.

We started recording just under a year ago and it was great. We all contributed towards the writing – me and Abby co-wrote one, I wrote one and Lou wrote one. It was a really good process because it was so much less to worry about than an album because you’ve got so many plates going at the same time, but to really focus and hone in on three songs – we had a lot of time and a lot of attention on each song. I personally think although it’s only got three songs on it as opposed to our album, it’s our most solid and consistent piece of work.

Why did you choose those three songs for the EP?

I think we had a load of them and were going through which ones we thought were the strongest, and it basically comes down to those were the three strongest songs we had at that point. But also it kind of reflects different aspects of the band. So our single Snow, Rain And A Hurricane is quite rocky – it’s sort of the country-rock aspect that we have had in the past on the album. And then you’ve got Reaching Out To You which is quite mellow and sort of reflective, which I think a lot of people could relate to as well. And then It’s A Start is kind of the classic heartbreak songs which we’ve always had on our albums. One of us is always going through some kind of heartbreak and misery so it all sort of comes out on every kind of release, and again I think people can relate to that as well. So those are the reasons why we ended up with those songs but primarily it was because at a basic level they were the best reflection of the band.

What would be on your career bucket list for the band?

Oh man! Well firstly definitely to perform at the Grand Ole Opry. We went there a couple of years ago – me and Abi went to go and watch Brad Paisley there. It was actually their 91st birthday night and he was headlining it. It was so cool to see him play at the church of country music. But that would definitely be one. We went on the tour as well – Lou flew out a few days later and came out on the tour with us, and we stood on the stage and got a photo and were like, ‘yeah, one day we really want to play here’. So that’s definitely on the bucket list.

I’d also really like to open for someone like Little Big Town or Lady Antebellum or someone like that. For me Brad Paisley would be amazing if he would ever do it. I’d love to get a song played on Radio 2 as well. For us, where we are right now, if Bob Harris or someone like that played one of our tracks that’d be a huge goal for us. So those are probably my personal bucket list.

What’s next for the band?

We’re sort of in the process of planning out what we’re going to do throughout the next year. We’re always writing so there’s always a chance that we will end up recording something. If we do record something this year it’ll probably only end up being a single rather than an EP or an album. The EP that we just released has only been out for about two months, so we’re still in the process of just putting that out there and trying to get as much exposure as possible for that. Obviously we’ve got the single Raise A Glass which’ll be out hopefully at the end of the month.

We have got some festivals coming up in the summer which we’ve been confirmed for but we can’t really say at the moment, and there’s a few other things in the pipeline. We’ve got gigs throughout the year and are just sort of piecing it all together. After Christmas it sort of starts to heat up a bit and you’ve got a lot of things going on and a lot of plans being made. We’ve got quite a few things to look forward to this year but it’s just all being locked in at the moment, and once we’ve got it all together we’ll start promoting it and putting it on social media and letting everyone know.

Orfila’s EP Built With a Dreamer’s Hand is out now as is their new single Raise a Glass, which you can listen to below:

Advertisement. Scroll to continue reading.
In this article:Orfila