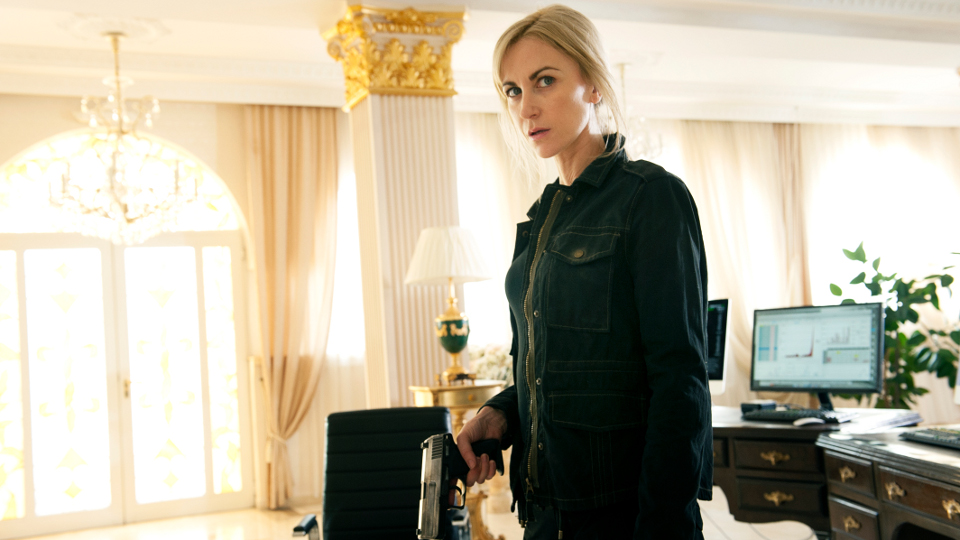 In the latest episode of Strike Back, Section 20 and Jane Lowry (Katherine Kelly) raced to get to Omair Idrisi (Don Hany) first.

Episode seven opened up with Wyatt (Daniel MacPherson) practicing shooting with his pistol. It didn’t look like he needs it though after he put all six bullets through the bullseye of his target. Having previously put two bullets into Idrisi, Wyatt couldn’t understand how he could possibly be alive. Donovan (Nina Sosanya) got a hit on Lowry who was moving in on the home of Johannes Krieger (Adrian Bouchet), a CEO of a private military. Donovan sent the team to Krieger’s compound.

In Magdeburg, Germany Lowry and Volkan (Darrell D’Silva) arrived at Krieger’s compound first. They walked in on him having sex and Lowry demanded to know where Idrisi was being held. He said he didn’t know so she shot him through the leg to show how serious she was. He confirmed that Idrisi was alive and gave her a name of someone who knew where he was. Lowry killed him before leaving. Meanwhile, Section 20 arrived on the scene and found Krieger’s guards murdered. Novin (Alin Sumarwata) and Reynolds (Roxanne McKee) captured Volkan who claimed to be an MI6 informant.

Inside the compound, Wyatt and Mac (Warren Brown) discovered a painting with a hidden camera that had captured Lowry killing Krieger. It also had their conversation which confirmed Idrisi was alive. They heard Krieger explain that someone called Rachel Sheridan (Dervla Kirwan) new where Idrisi was, puttin Section 20 onto the same path as Lowry.

Jensen (Phil Dunster) briefed the team on Sheridan and also tracked down her daughter Lila (Sai Bennett). Reynolds confronted Donovan about Volkan and felt she wasn’t being fully truthful. They interrogated Volkan to find out what he knew and offered him double what MI6 was offering if he went back to his people and led Section 20 to Lowry.

Volkan’s people found a tracker on him that Section 20 had planted. They destroyed it and knocked him unconscious so Wyatt and Mac went to investigate. Volkan was taken to Lowry and he agreed to talk to her alone. He told her that he was let go in order to betray her. Lowry told him that Idrisi was alive and that they needed to find Sheridan.

Novin, Wyatt and Mac went to find Lila. They found her in a bar she worked at and Wyatt tried to work his charm on her. It didn’t get him far so he tried the truth. Suddenly some suspicious looking guys came in. Wyatt extracted Lila while Novin and Mac fought the guys. Wyatt took Lila to get her things and within minutes it looked they were going to sleep together. Sadly for Wyatt she tricked him and left him handcuffed to the bed. As she left she found Mac and Novin waiting for her and they came inside and poked fun at Wyatt.

Back at Section 20, Reynolds and Donovan spoke to Lila who said she didn’t care about her mother. Wyatt tried to warn her that the men would come for her again. She wouldn’t listen but he gave her his number, in case of emergency. On the back of the number was a message saying not to go to her mother.

Volkan called Section 20 claiming to have stolen digital files that would lead them to Lowry. He arranged a dead drop and Novin and Jensen volunteered to go. Meanwhile, Lila ignored Wyatt’s advice and went to see her mother. Her mother was annoyed that she had come and scanned her car for trackers. Wyatt, Mac and Reynolds arrived on the scene to talk with Sheridan.

At the dead drop, Jensen asked Novin if things were ok. She told him again not to make things weird and left him in the car to go and make the drop. Jensen updated Donovan while Novin went and scanned for explosives. She couldn’t find any or any intel. Back with Jensen the car window was put through and he was kidnapped.

Jensen awoke tied to a chair with blood trickling down the side of his head. Lowry walked in and questioned him about Section 20’s progress. She spoke of Project Tenebrae and said it was the real enemy. She pushed for info on Sheridan and Volkan walked in. Jensen said he had no idea where she was and Lowry left him to Volkan who tortured him with a rather large screwdriver.

Back with Sheridan, the team tried to talk to her. They wanted to know where the black site was where Idrisi was being held. Sheridan had her barn rigged with explosives set to go off every 4 hours unless she input a code. After entering the code, Sheridan gave up the information that they asked for. She pointed out a secret entrance she had built into the black site but promised that if they got in they wouldn’t get out.

Novin went to the site and found an injured Jensen there. She requested a medevac and Jensen told her that he had given up Sheridan’s location. Novin called in that the operation was compromised as Sheridan’s barn was assaulted. Sheridan tried to lure the attackers away while the team lay down fire. Lila tried to run but was shot and killed. Sheridan was found by Lowry and Volkan.

Inside a case that Sheridan had pointed out, Mac found an RPG which he gave to Wyatt. He used it to take out the attackers jeep and mini-gun. He then stomped outside and killed most of the attackers before beating the last one to death.

At the end of the episode, Novin was with Jensen who was recovering in hospital, but it looked like he might have lost an eye!

Read our preview of Strike Back: Retribution episode 8.