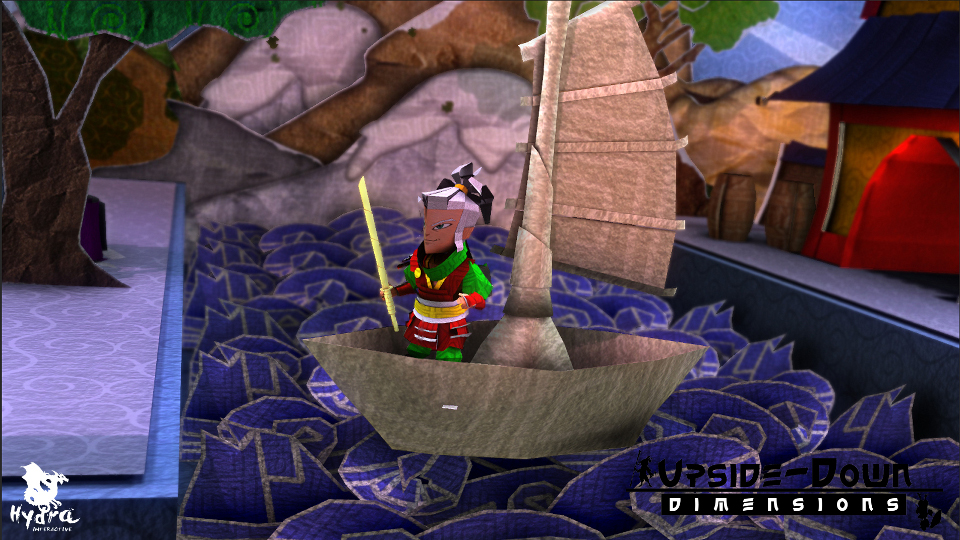 Upside-Down Dimensions is the second title from independent developers Hydra Interactive, coming in after their mobile debut with Froggler.

Upside-Down Dimensions is, by all accounts meant to be a great game. The art style is extremely catchy with origami-based heroes, and 2D objects translated into a 3D world. The idea of a hack and slash, especially in feudal Japan is a concept that can make most gamer’s salivate at the very thought. Cute and quirky, anything involving ninjas or samurai, and you would think you have a sure-fire recipe for success here. Unfortunately, even with it being an Early Access game at the moment, it’s falling far from it’s mark.

My first dive into the game, and I was already met with a game-breaking bug. It was something simple, but completely crushing–the game would take you through an unskippable intro film, but instantly crash afterward. I must say, the developers were easy to reach, and quickly fixed the bug which gives me hope in that sense. Moving beyond and actually playing the game, the problems started to trickle in and quickly mount.

First glance, I noticed that beside the beautiful work on the title screen were low resolution images for the platforms Upside-Down is meant for. This in all isn’t a problem, as it can be quickly fixed, but it started to set the stage for the rest of the game’s downfall. In it’s current state, I would honestly say it’s nearly unplayable. The tutorial is straightforward enough, but coupled with what sounds like completely out of place sound effects for menu pop-ups and the sheer response time for any command, it falls apart like a house of cards.

The controls are sluggish. For a hack and slash game, this is almost certainly the kiss of death. I played with an Xbox controller, and every time I would press a button, be it to jump, do a special attack or just plain swing my sword, everything was delayed to the point where it becomes frustrating. A big part of this is attributed to the fact that you perform upon release of a key, not the initial pressing of it which makes for unnatural controls. Enemies attack faster than youy weapon can come down, timing with blocking is difficult and almost useless in the state that it’s in. The 3D world doesn’t help things along either–it’s often painful to engage in combat itself. You find yourself attempting to swing at your foes, only to miss the hitbox by a wide margin. They end up ravaging you as you’re simply attempting to gain a handle on the situation. Ganged up by three or more baddies, and you can wave bye to your sanity as you die time and time again over poor controls and unfair combat setup.

The moves themselves are buggy as well. The first major special move you’re given is a sword slam (A+A+A). This causes your character to fly up in the air and come crashing down for Area of Effect damage. Unfortunately it looks great on paper, but with it taking some time for your character to even double jump (I guarantee you’ll be mashing jump ten times for the three it takes to get up in the air due to poor registering), it’s rendered near useless and your enemies having plenty of time to dodge or block the attack. I’m not totally sure if it’s on purpose or not but that particular attack appears to be self-harming, and two or three of them will kill your character off for simply performing them successfully. When you’re struggling simply to hit things with your weapon, last thing that’s needed is a self-harming attack.

Most of what you’re playing is divided between the broken combat and puzzle solving with your mirrored world counterpart. Again, in theory this all seems amazing, but is so poorly executed in its current state. Boxes that should move, don’t. Puzzles become impassable by minor mistakes. With the actual hook of the title, the switching of worlds, the transition animation looks overall lacklustre. The entirety of the game being based on this, you would think that the act of switching dimensions would be grand–bells and whistles, perhaps something that could be skipped it’s so lavish. But it’s anything but that, with screen tears and jerking of the animation all over the place. The machine I run is fully capable of playing on ultra, but even on that setting, nothing is particularity remarkable about any graphical points. The art suffers, and in turn the entire game suffers.

View some screenshots from Upside-Down Dimensions below:

There is an option for multiplayer as well. For a hack and slash game, this can also make for quite a successful run, appealing to a wider market. I believe this should be the big sell for a game like this: arcade style mayhem, teaming up together to take down foes. However, just like when you play in single player mode, multiplayer has all the same problems, times two.

I’ve taken a few things in account here whilst writing this. Knowing that it is an Early Access game gives a reviewer a feeling of growth in the future–something to look forward to with a particular title. I’ve noticed two things that have really lead me to the conclusion that I have about Upside-Down: its Kickstarter campaign and the previous title Hydra Interactive released. At a glance, it really seems like Hydra is quite good at meeting their platforms–Upside-Down Dimensions passed Steam Greenlight, and they’re ambitious in bringing their games to various platforms and operating systems–as you can see with Froggler, their first title. Unfortunately there’s not much originality with Froggler, borrowing–if not ripping, concept and even the name of the ever-famous Frogger.

This wouldn’t be an issue, but coupled with the failed Kickstarter campaign, you start to take it all into account the work ethic and type of games that are being put out. The Kickstarter sought out a lofty goal of $75,000, falling short of 7% with only raising $5,148. The end of that campaign was April, 22nd of this year. Not to say that this will completely pull the rug out from Hydra’s feet, but it certainly can’t be a beneficial blow to the developers. I would have expected the state that they released Upside-Down in now to be what would have been offered when the Kickstarter was created. These particular bug encounters that I’ve mentioned are something that cannot be ignored while playing either–they are front and center, glaring directly at the player. This leads me to believe that the developers aren’t properly testing, if at all, and are leaving it to the Early Access reviewers to do all the testing work for them. Yes, that is what Early Access is about essentially, but it truly feels there is a major lack of effort here.

Honestly, I hate to say all these things about what looks to be a promising title. Hydra very well could pull through and deliver a great game in the end, but in its current state it will take ages to get there. If finishing it to a polished title is the goal, and it’s stuck with, this could be a fun little hack and slash to have in your library. But unless you want to be an unofficial bug tester, steer clear for now.