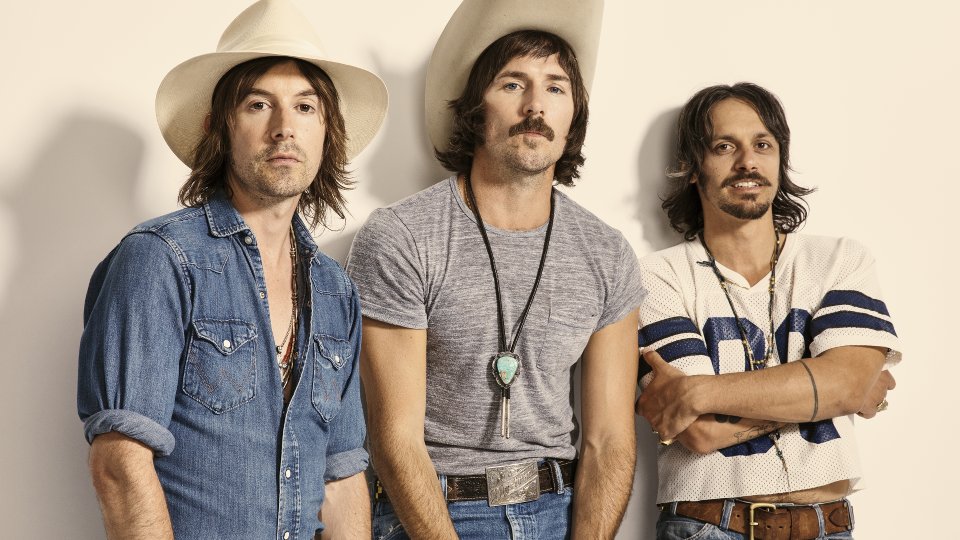 One of the songs of 2017 is undoubtedly Midland’s chart-topping debut single Drinkin’ Problem.

The song has been, deservedly, a breakout hit for the trio – Mark Wystrach, Jess Carson and Cameron Duddy – and launched their incredible debut album On the Rocks. Recently it was announced that Midland would be coming to the UK for the first time in 2018 to perform on the Main Stage as part of C2C: Country to Country.

I caught up with Mark from the band to talk about their breakout success, the misconception of overnight success and having so much material that more albums could be on the way soon!

You guys were recently announced as part of the line-up for C2C 2018 and we’re all pretty excited about it. How excited are you to come over here and play life?

It’s going to be another chapter for us. We haven’t crossed the pond and played abroad yet. We’re really excited to see how the music and our live show translates to the UK audience. We were talking to our buddy Drake White and he just said that the fans in the U.K. are second to none and that there’s a fervor that’s unlike American crowds if you will, maybe a little less reserved. No different to how y’all celebrate your football matches you know, but kind of the next level (laughs). We’re really excited man!

I spent some time with Drake while he was in the UK and his headline show at The Borderline was crazy. The fans were so passionate. There’s a lot of passion for you guys here from UK Country fans.

We’re really excited, especially with the way the album On the Rocks is catching traction. It’s picking up and it’s been really crazy. Garth Brooks was asked last week at a conference for his tour, when he was discussing all the events going on in this country, who he was listening to on Country radio and he said us. That was pretty crazy! It’s surreal that it’s catching on and it feels really, really good because it’s just me and two of my best friends making the music we love. It’s a blessing. I feel very, very fortunate right now but it’s been a lot of hard work too so I feel pretty proud as well.

As a band you’ve toured relentlessly for a few years now to get to this point haven’t you?

Yeah. It’s been all in the last four years so a four year earlier overnight success. There’s been a lot of sacrifice so it feels really good but nothing is guaranteed. Nobody’s saying, ‘hey if you do this and you work this hard then you’re going to get this’ – that’s never guaranteed. It’s definitely been a leap of faith. The calibre and the quality of the music, and the passion for it, is definitely what’s pushed us forward and given us the confidence to go all in!

It’s funny this idea that people have about overnight success isn’t it? They can assume the first time they hear a song that it’s come out of nowhere when actually there’s been a huge amount of work to get to that point. Is that frustrating for you?

No man, it doesn’t really matter. The only thing that really matters in this life and in this journey is what you know and as long as you know your truth, it doesn’t matter. There’s always going to be misinformation. Eventually the truth always gets out. Anybody that is around or connected to music understands that they don’t just give this stuff away.

You can’t fake it when you play country and rock ‘n’ roll like we play (laughs). You’ve got to put in your time and that’s something we’ve put in. You can’t be as good as we are live without spending thousands of hours practicing your own craft and then thousands of hours as a band playing together. You really develop something special.

I was just watching Mr Dynamite, the James Brown documentary about the connection he had with the fans and how they all speak in a language that’s not verbal. It’s where everybody is connected and you’re making changes on the cuff. That’s when you create something special, when you have that connection and that’s what this band has. We’ve got a really great lead guitarist, our drummer is unbelievable and of course Jess and Cameron are very talented. It’s really fun when you have a great team like we and it’s starting to become something special. For me that’s the fun man, the live shows. When we started this band, of course we were songwriters and we were in the studio, which is kind of the three-headed monster of music. The other two are kinda irrelevant if you can’t bring it live.

I think the songs actually sound better live than they do on the record. There’s definitely a little bit more of a roughness, not looseness, that comes off a little stronger during a live show. I hope everybody comes out and sees us!

Let’s talk about your breakout single Drinkin’ Problem. The song has hit number one and it’s on the radio all the time. How important has that song been to your career?

Technically we wouldn’t have a career without that song. I don’t even feel like Drinkin’ Problem is the best song on the album but it’s very special. They talk so much about timing in this life. There’s no such thing as luck, it’s when hard work and preparation makes opportunity and that’s what happened with Drinkin’ Problem.

It was written from a more traditional viewpoint looking back to the music that inspires us from George Jones, Merle Haggard, Gary Stewart, early George Strait, Johnny Lee, Alabama, the Eagles, The band. They made catchy accessible music but it didn’t mean that it was shallow. It’s a dense song as far as the content goes. The content can be serious or it can be very fun and light-hearted. That’s the kind of classic flip of the words that Merle Haggard was so great at. It allows you to sing a heavier Blues song and still make it fun, if you will. It’s a beautiful song about a dark place or it’s a dark song about a beautiful place… I don’t know. It just all depends. I do love singing that song every night when we finish the show. Everybody gets their cameras out and is singing along, that’s really fun. I have no doubt as this album spends some time in the ether, we’ll get the same reaction to some other songs as well.

On the Rocks is one of my favourite albums this year and it’s been picking up a lot of acclaim. How do you feel about the reception it’s had?

This record is a lifetime in the making for us because it’s the first album we’ve released. There was a lot of blood, sweat and tears poured into it. We wrote every song or had a hand in co-writing each song on the album. We recorded it with our friends, we were there on the boards and there on the mixes… there wasn’t a single part of this album that we weren’t in charge of or collaborating on with Josh Osborne and Shane McAnally.

When you create something, you hope it’s going to be well-received but the most important thing is when you create something that you believe in it. It’s not always the case, I feel like, with a lot of artists. Sometimes I feel like there’s been a lot of music that’s disposable and it’s written under the guise of a gimmick, and I think the artist is trying to reach a certain demographic or make money. I think that the quality of music in Country has really been suffering to be honest with you. I think there is a little bit of that mentality.

This was written hoping that it would stand the test of time. We were aspiring for greatness. We weren’t ready to release music until we felt like it was there. I really feel like On the Rocks is a great album. To see the reaction it’s getting is great. It just means that we get to keep doing what we’re doing for a while. It also fires you to keep going. I can’t wait to release more music soon.

Are you already thinking about the next album and getting material together for that?

Oh man! We’ve got enough music written right now to release 3 albums in the next four or five months, if we had the time to record. We’re all songwriters so we’ve got a lot of content.

Do you think that you might give some of these songs to other artists or would you want to keep them for yourself?

Not every song you write ends up being something that you’re completely in love with. I think there’s some earlier stuff (we may consider giving away) and a couple of songs but no, I think for the most part these are songs we’re very excited to record and release. They’re songs that have been part of our live shows for years. There are some songs I got a lot of heat for not putting on the album (laughs). It’s a good place to be right now.

You recently announced that you’re going to be on The Breakers tour with Little Big Town and Kacey Musgraves. What can your fans expect from that tour?

Oh just a lot of energy and a lot of excitement. Little Big Town have been friends of ours for years and we’ve already had a lot of shared experiences and good stories. They’re just really passionate about what they do and they’re really hard workers. Their live show is dynamic and awesome. You bring in Kacey who is such a throwback. I think has one of those lovely voices and there doesn’t need to be a lot of pomp and circumstance around her, you just want to hear her voice and hear her songs. Then you go to us and we’re going to be bringing honky tonk rock ‘n’ roll to it all. I think it’s a really great ticket. It’s going to be really diverse because we’re all totally different but our commonality is our love and passion for music and for having a good time onstage. I know that we’ll all be getting up together and playing a song like we did on the The Tonight Show. It’s going to probably be one of the best times you can have at a concert.

What message do you have for the UK fans that can’t wait to see you in 2018?

Start drinking water right now. Get ready. It’s going to be a party and a good time so just be prepared to have a great time and sing as loud as you can. Just celebrate life man and be good to one another.

Midland’s debut album On the Rocks is available now. The band will perform as part of C2C: Country to Country 2018 at The O2 Arena in London on Sunday 11th March 2017.