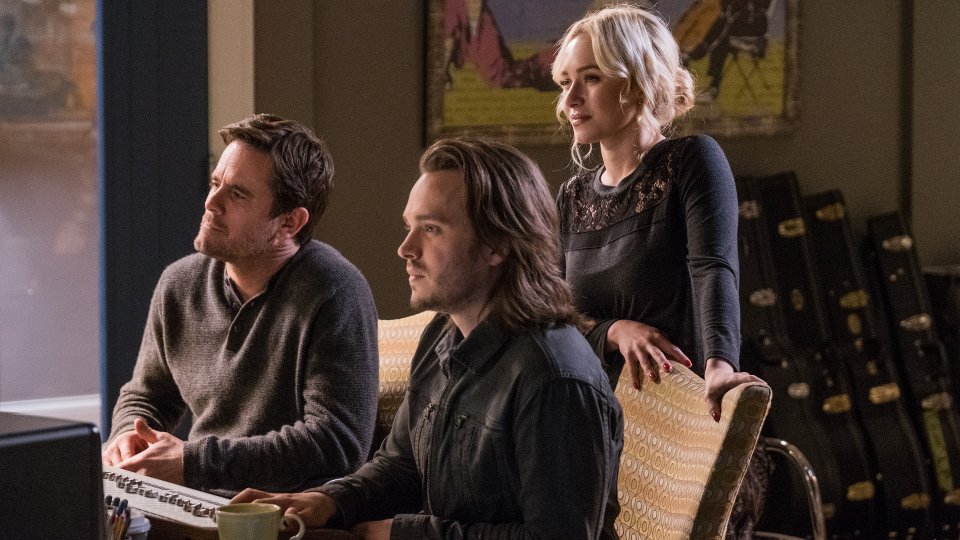 Nashville is proof that you can’t keep a good show down. The country music drama was cancelled by ABC after four seasons causing outrage amongst its fans. Using social media, the Nashies shouted loud and frequently until their voices were heard and the show was picked up by CMT and Hulu. A natural home for the series, fans were overjoyed that the show would be continuing for a fifth (and recently confirmed sixth) season. A reboot of sorts, the show got new showrunners and refocused on its core characters in a bid to move away from the soapier feel of the previous season.

As fans on both sides of the Atlantic now know, the fifth season is also the last for one of the leading stars of the show – Connie Britton. Nashville’s return was overshadowed by rumours that Britton was leaving her role as Rayna Jaymes, something she denied at the time. Turns out she was telling fibs and Rayna departed the show in a body bag in the first half of the season leaving many fans devastated.

The ghost of Rayna will live on in Nashville though and there proof of that is clear with the release of the first two soundtrack volumes for the latest season. They feature the last songs Britton recorded for her character and they give the music an additional emotional gut punch. Try listening to My Favourite Hurricane, a duet between Britton and Charles Esten, without shedding a tear. Even more devastating is the gorgeous Can’t Remember Never Loving You, another lovelorn duet from Rayna and Deacon’s duets album that Rayna sadly never lived to complete. I’m welling up just thinking about the damn song!

Nashville has always been very strong when it comes to its music so across the 26 tracks (28 if you have both deluxe versions) there’s a wide variety of fantastic songs from the show’s cast. From Volum1 the highlights include Joseph David-Jones’ funky A Few Steps My Way, Clare Bowen and Sam Palladio’s dreamy All Of Me and Lennon and Maisy Stella’s gorgeous Your Best. The soundtrack comes to close with the tear-jerking Sanctuary, a song performed in memory of Rayna by Deacon, Maddie (Lennon Stella) and Daphne (Maisy Stella) during the CMT Awards on the show.

The stronger of the two soundtracks is Volume 2, mostly because there’s almost twice as much music on there! It opens with You’re Mine, a song that features all of the main cast members as they helped Deacon finish his duets album with Rayna. It’s another tear-jerker but there’s hope and optimism in the track, which is a great start to the soundtrack. Elsewhere Lennon Stella flies solo for the country-pop moment Saved, Will Chase makes a brief return on the soaring Wide Open, and Clare Bowen and Sam Palladio capture the sexual tension of their characters Scarlett and Gunnar on the feisty The Hell Of It Is.

New cast member Rhiannon Giddens, who is a folk star in her own right, adds a new sound to the Nashville landscape on Sourwood Mountain and the gospel gem Can’t Nobody Do Me Like Jesus. Similarly Joseph David-Jones, who plays Clay on the show, adds a whole lot of soul on the incredible Before You and This World Don’t Owe Me Nothin’.

The only complaint I have with the soundtracks is the lack of Juliette Barnes aka Hayden Panettiere. It makes sense as her character’s storyline is all about recovery following her plane crash but I’m hoping there’s a third volume with some more songs by her before the season is over.

Nashies will lap up these soundtracks and in my opinion they are the strongest in a while. The new showrunners really are playing to the show’s strengths and the music is back to season 1 standards. How long the show lasts without Rayna remains to be seen but the signs are positive. After all, she wasn’t really the best singer on the show was she?