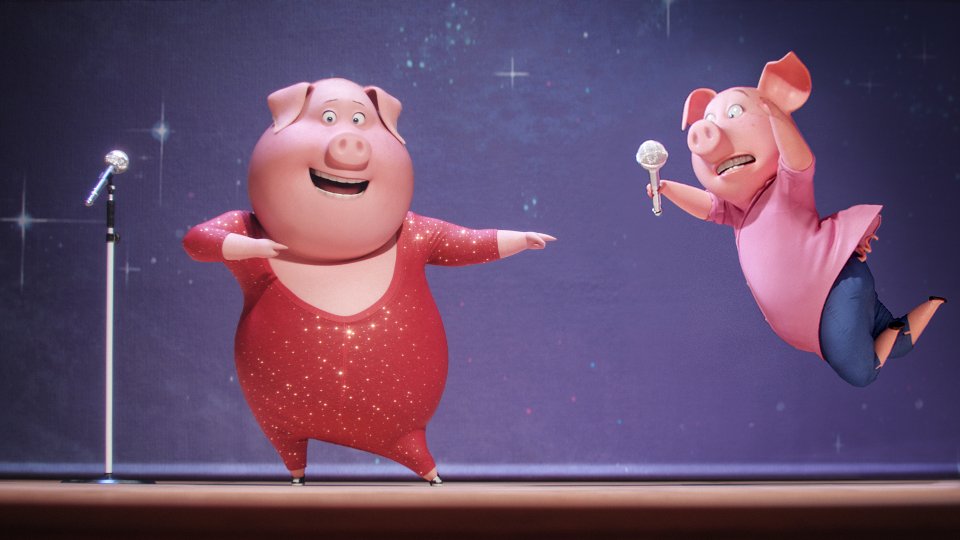 This was something of a surprise departure for director Garth Jennings, one half of the legendary promo producers Hammer & Tongs. After Hitchhikers Guide to the Galaxy and Son of Rambow, I don’t think anyone expected Jenning’s to write and direct an animated musical for the company responsible for the giving the world the Minions. But that’s exactly what happened, and the end result is Sing.

Of course no one would have known when they started making Sing that 2016 was going to be one of the all-time great years for animated feature films. Unfortunately out of the two films about anthropomorphic animals that came out last year, Zootropolis most definitely went home with the gold. But that’s not to say Sing is without its charms.

Buster Moon (voiced by Matthew McConaughey) is a Koala who manages a crumbling theatre. There’s a delightful kind of haplessness about Buster, he wants to put on great shows and entertain the world, not for glory or riches, but because he just loves the theatre. The film then zips all over town, literally flying through the streets, introducing us to multiple characters, and quickly setting up their stories.

There’s Rosita (a pig voiced by Reese Witherspoon) who is an unappreciated wife and mother; Johnny (a gorilla voiced by Taron Egerton) who is a soulful young boy being lured into a life of crime by his family; Mike (a mouse voiced by Seth MacFarlane) a Sinatra style crooner with a bad attitude; Ash (a porcupine voiced by Scarlett Johansson) a teenage punk rocker; and finally Meena (an elephant voiced by Tori Kelly) who has an amazing voice but is terrified of singing in front of people.

Buster decides that his next show will be a huge Pop Idol/X-Factor style singing contest. When a printing error adds a few too many zeroes to the prize on offer, every animal in town comes to audition. From here on in it plays like a very fast-paced jukebox musical. There are so many songs in this film, the rights clearance lawyer must have been earning some serious overtime.

Things don’t progress quite as you’d expect. There’s a kind of charming, unpredictable, scattershot approach to the film. Jennings throws everything at the screen, and sure not all of it sticks, but there’s enough good stuff on show to keep you entertained. The voice cast are excellent and have terrific singing voices. Each character is interesting and unique and has their own story and problem to overcome. It’s not side-splittingly funny, but there are some great gags. Gunter the sassy pig (voiced by Nick Kroll) is a constant source of giggles.

And of course there’s the songs. From massive contemporary pop smashes, to obscure album tracks, if your toes aren’t tapping during this film, then there is no hope for you! It might not be in the upper echelons of the animated films of 2016, but Sing is a fun, diverting film, with a positive message about not letting fear stop you from doing the thing you love. What’s not to like about that?