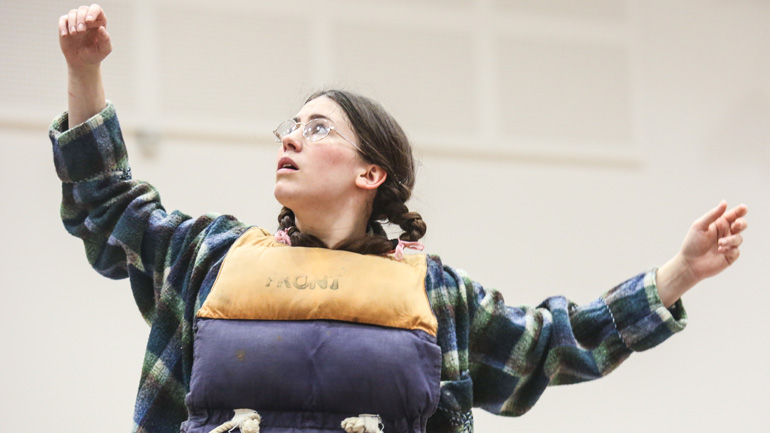 This May, West Yorkshire Playhouse is home to Lifeboat, a new production from Catherine Wheels Theatre Company which is inspired by a real-life story of survival.

A wartime tale of courage and companionship, Lifeboat recounts the true story of Beth and Bess, two teenage evacuees who board The City of Benares liner destined for Canada. When a torpedo strikes their vessel mid-journey, the girls are cast adrift in a ferocious storm with little hope of recovery. As they cling to the upturned hull of their lifeboat, the youngsters recall the events and aspirations which brought the separate strands of their lives together.

Lifeboat is written as an accessible piece of studio theatre, appropriate for ages eight and above. It’s certainly theatre for kids, though the scope and detail in Nicola McCartney’s script delivers a bounty of interest for all ages. Cultural references abound, including a Wizard of Oz thread punctuated by a steady stream of wartime songs with well-researched historical signposting. Ebullient dialogue successfully captures a youthful voice, brimming with playful optimism and humour which is sure to resonate across the generations. That said, the play refuses to shy away from the realities of war, hinting through its childlike perspective at the horrors beyond; be it bombed out houses, gas attacks or whispers of concentration camps.

In a dynamic two-hander, Beth and Bess are played with restless vigour by Amy McGregor and Lois Mackie. Assuming the guise of numerous supporting characters into the bargain, their delivery is engaging and energetic, providing a clownlike chaos played from a costume box. The duo’s enthusiasm is irresistible and instantly has the audience on board for the ride. Dynamic technical presentation also expands the vista, courtesy of Dave Trouton’s evocative music – arranged mostly for piano – coupled with forceful sound design and warming lighting effects by Jeanine Davies.

Gill Robertson directs a traverse stage, providing plenty of two-and-fro movement and creatively establishing the deck of a vessel along the length of the space. Great distance is occasionally placed between the opposing performers, encouraging audiences to track the action, furthering creating a panorama of scale and a sense of dislocation. The studio also provides an immersive opportunity for audiences to sit within two carpeted channels on the floor; a popular viewpoint, judging by the smiling and attentive faces of dozens of cross-legged children. (Those with older sea legs can choose a more comfortable spot on the raked seating.)

An immersive adventure beset with tragedy, Lifeboat is ultimately an uplifting story which captures the imagination through characterful writing and skilful delivery. Playful and spirited, the play demonstrates the resilience of friendship in the face of adversity and offers universal, timeless appeal in its heartwarming resolution. A buoyant evocation of childhood and a striking reminder of the extensive casualties of war, Lifeboat is a memorable voyage of discovery into the not-so-distant past, offering much that is relevant to the present.