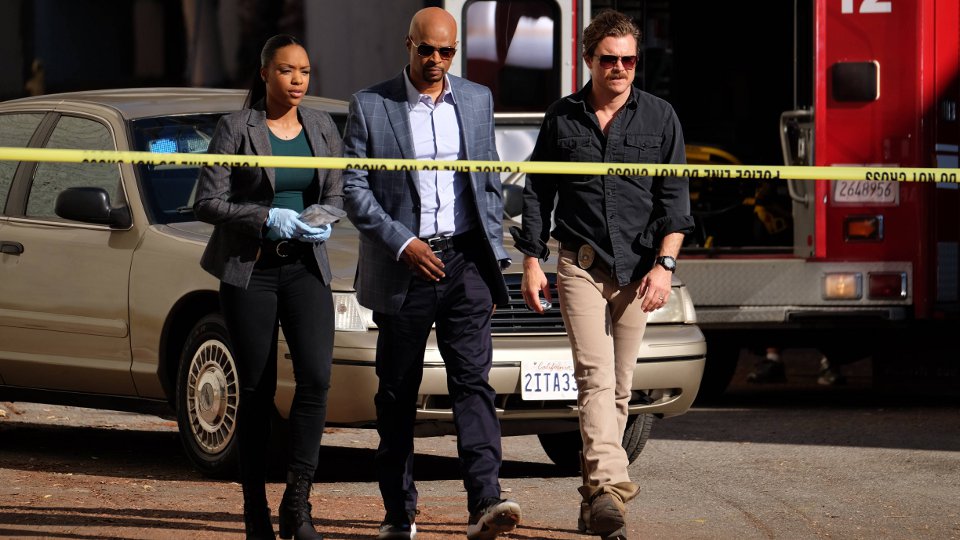 On the latest episode of Lethal Weapon, Riggs (Clayne Crawford) and Murtaugh’s (Damon Wayans) latest case involved the death of a woman and a drug cartel.

The episode was set at Christmas time and a large part of it involved Riggs having flashbacks of Miranda. The opening of the episode showed how they met in a bar on Christmas Eve when she missed a flight home.

They were drinking alone but got talking and she went home with Riggs. Miranda commented on a tiny Christmas tree he had. Riggs then awoke in the present day in his trailer and it showed he still had the tree. Well at least he did until he suddenly made the decision to bin it.

At the Murtaugh household, Roger was complaining about his neighbour’s Christmas lights. He thought they were too much and was worried about the power grid. He felt Christmas should be about family and ordered everyone to be around for family time with he and Trish (Keesha Sharp).

Riggs and Murtaugh were called to attend a crime scene when a woman died falling off a balcony and landed on a car. They weren’t convinced that it was a suicide and felt she was probably pushed.

The apartment she lived at was owned by her boyfriend Eddie flores. He was involved in a cartel and Riggs knew his name. Captain Avery (Kevin Rahm) cancelled their leave to pursue the case.

Bailey (Michelle Mitchenor) found a way into the woman’s phone and saw she had a meeting at a coffee shop with a contact named H. At the coffee shop they discovered that the H stood for Hannah. She was a reporter and the woman was giving her information on Flores.

Riggs and Murtaugh decided to pay Flores a visit at a nightclub. He seemed overly confident and not bothered that the police were looking into him. He seemed to know about Miranda’s death and Riggs almost threw him off the building because of it. Murtaugh managed to stop him.

Riggs went to a lockup to access some old case files. He took Miranda’s accident report to Scorsese (Johnathan Fernandez) to get his opinion. He gave him a bottle of alcohol as a thank you.

Riggs and Murtaugh went to the woman’s apartment to recover her security camera. At the apartment the police crime scene tape had been broken. Inside they found Hannah who had also come for the camera.

Hannah handed the camera over and left but Murtaugh noticed that she had removed the memory card. He went after her while Riggs took a phone call from Flores. He taunted Riggs about Miranda. When Hannah got into her car it exploded, killing her.

The bomb had been detonated by a burner phone and the memory card from the camera had been badly damaged. Riggs wanted to go after Flores but Murtaugh said they needed to do it the right way. Scorsese didn’t see anything suspicious in Miranda’s accident report.

That night, Riggs was back in his trailer and a photograph reminded him of the time he got Miranda a necklace for Christmas. She gave him a gift of a positive pregnancy test. Upset Riggs put his gun under his chin but was disturbed by Murtaugh.

Bailey managed to recover some video from the damaged memory card. It showed a man, who they presumed was Flores, throw the woman off her balcony. He purposely kept his face away from the camera but zooming in they were able to extract a reflection from a Christmas tree bauble.

The pair went and arrested Flores and while taking him away he said something to one of his men. A man turned up at the Murtaugh residence with a Christmas present purportedly from the Precinct for Roger so she let him in.

Riggs got a call from the uncle of Flores. He offered to trade his nephew for Murtaugh’s family. Riggs decided to take Flores to the airport as instructed while Murtaugh went to save his family.

Trish spotted Murtaugh and he signaled to her to go to the garage. She asked her captor if she could make coffee and then had to go in the garage. Murtaugh smacked him down and Trish gave him a kicking too. Murtaugh sent Riggs a message to say his family was safe.

During the trade for Flores he taunted Riggs some more over Miranda. Riggs held a gun to his head to try and get the answers he needed but the uncle had Flores killed. Riggs asked the uncle but her replied that Riggs wasn’t important then and still isn’t now. Then he boarded his plane and left.

Back at the Precinct, Avery offered Riggs to go to his for Christmas. Riggs declined. He also hoped that Riggs got the answers he wanted but he hadn’t. The uncle was shown on his plane talking on the phone some more about Riggs.

Elsewhere in the episode, Murtaugh battled with his neighbour over his Christmas lights. They kept overloading the power to Murtaugh’s home. In retaliation, Murtaugh stole one of his light up reindeer.

At the end of the episode, the Murtaugh family took Christmas to Riggs at his trailer. They brought food and Murtaugh hooked up the reindeer to the roof. When he tried to turn it on it blew the power out there as well.

Watch the trailer for Lethal Weapon 1×10 Homebodies below:

Riggs and Murtaugh end up in the middle of a turf war as they investigate the murder of a millennial “designer drug” dealer.