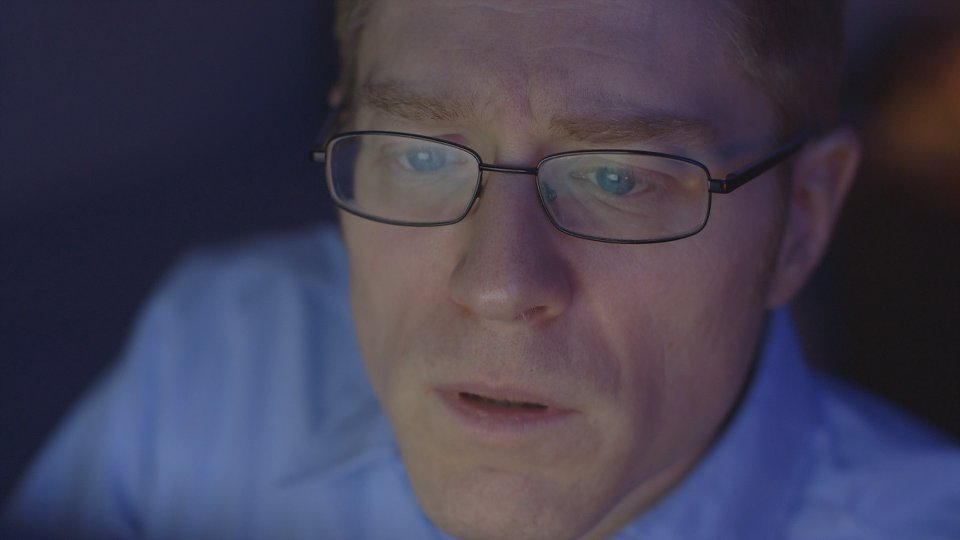 Grieving father Brad (Anthony Rapp) enters into the world of online chat following the death of his son. Shutting himself off from his wife Marcia (De’Adre Aziza), Brad connects with Yenny (Jimmy Brooks) who is living under the radar as a gay man in Jamaica. The conversations between the two men quickly turn from friendly to sexual as they embark on an online affair, with Brad’s wife having no idea what her husband is up to. As Brad gets more frustrated with his life, and Yenny reveals that his life may be under threat due to his sexuality the two men start to hatch a plot to be together.

Bwoy is the latest feature from writer/director John G. Young and it explores the appeal and the dangers of entering into an online relationship with a complete stranger. Brad is looking for any way to get away from his grief and in Yenny he sees a young man that could love him, help ease his pain and signal a fresh start. Tensions between the two men rise when Yenny starts asking for money, which Brad freely gives to begin with but soon starts to question his new lover’s intentions.

Whether or not Brad is the victim of a scam is something that runs through the duration of the film and the third act does give you a definitive answer but it may not be quite what you expect. Until that point you can’t help but sympathise with Brad as he’s painted as a man who doesn’t quite know what he wants from life or indeed who he really is. All the while Marcia, who is also grieving for the loss of their son, feels completely disconnected from the one person who should be supporting her.

The majority of Bwoy takes place via a computer screen or a smartphone. The film could easily be a play and in fact would probably work even better as one. Due to the limited nature of the setup, Bwoy does begin to feel quite samey as similar scenes follow one another but there’s enough going on to keep you interested.

Anthony Rapp really is the standout here. His performance is one that is understated but he makes sure you can see Brad’s grief and pain bubbling under. He fleshes out what could have been a two-dimensional character and he makes you root for Brad throughout the movie. Jimmy Brooks doesn’t quite match the intensity of Rapp’s performance but he is solid enough as the alluring and mysterious Yenny.

Bwoy explores an interesting topic and one that is relevant to modern society. Like Brad, you’ll spend the majority of the film wondering if what you’re seeing is a genuine relationship beginning or a scam and it’s that intrigue that will keep you watching. Bwoy is a solid effort from John G. Young but the slow burn of the story and the limited variation in terms of the scenes may put off some viewers.