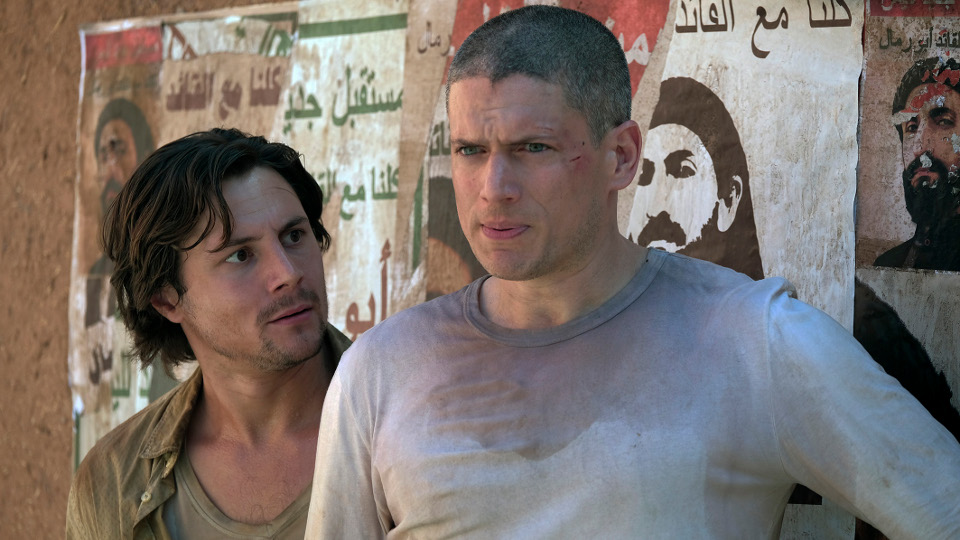 On the latest episode of Prison Break, Michael Schofield (Wentworth Miller) planned his next move.

If you want to avoid spoilers for Prison Break season 5, we suggest you stop reading now. If you don’t mind then please keep reading for a recap of episode 3 and a preview of episode 4.

The episode began with Michael watching out for the prison guards while copying what looked like Arabic from the tattoo’s on his arm. He turned the note into a paper airplane and threw it out the window at some kids playing nearby. One of them commented that ‘Bubble Gum Man’ was sending them something else and picked up the plane. He opened it out to read the note and there was a piece of bubblegum inside.

The kid ran off with the plane and put it under the mat outside Linc’s (Dominic Purcell) door. Linc caught him and spoke to him inside with Sheba (Inbar Lavi). He explained about the Bubblegum man. Linc gave him a box of Tic Tacs to keep the messages coming and the kid thanked him calling him the Tic Tac man.

Sheba read the note out and commented on how the writing style was unusual. She said it looked like spokes on a wheel. C-Note (Rockmond Dunbar) happened to be looking at a map of Sana’a and realised that the note was trying to suggest a location. A single red dot was present among the black ink and they surmised that it was trying to tell them where to meet Michael if the escape worked.

C-Note, Linc and Sheba tracked down the location of the red dot which turned out to be an auto shop. A man there explained to them that he had sold it to an American a long time ago and not seen him since. The man let them inside where they found Michael’s original plans for the escape. Among the plans they found passports, fake ID and recognised one of the men to be the terrorist leader Abu Ramal which made them nervous.

Check out the Prison Break 5×03 trailer below:

Sheba went to see Omar (Akin Gazi) about getting new passports for Linc and Michael. Omar said he could get fake ones made for $1,000 per passport. While Linc was busy with that, C-Note said he’d go help work on turning the electricity for the lights off.

Sheba and Linc went to pick up the passports. They handed over the cash and discovered that the passports were empty. A fight broke out and the pair were kidnapped by a man named Cyclops (Amin El Gamal). He got his name after Sheba had previous damaged one of his eyes.

While Linc was locked up Cyclops tried to find out who the men were that Sheba was working with. He beat and attempted to rape her but she put up a fight. Linc tried desperately to escape and finally managed to break free and save Sheba.

Inside Ogygia, tensions were very high as the ISIS bombing closed in. Michael told Whip (Augustus Prew) that there was only a matter of hours until they would be getting out. Ramal rounded up homosexual men to hang them. The first was Sid (Kunal Sharma), one of Michael’s cellmates. Michael stepped in and told Ramal they needed him to escape. When Ramal refused to let him go Michael said he would free him. A guard fired a gun to make them stop and declared there would be no killing inside the prison.

The prisoners were rounded up and lectured about not killing each other. A prisoner called Cross (T.J. Ramini) talked to Whip and told him that he was being used. He also tried to find out about the latest escape plan as he wanted to join with his brother (Shaun Omaid).

At meal time, Whip became paranoid and questioned Michael about the escape. It was revealed that they were working for the CIA to get Ramal out. Michael and Whip staged a fight and used it as a distraction to steal a watch from a guard. Michael then planted it on Ramal.

Back in the cell, Michael apologised to Whip for hitting him. He then explained that Ramal won’t be escaping with them. The guards turned up and tossed their cell over the missing watch. After failing to find it they did the same to the other cells and eventually found it with Ramal.

C-Note helped get the power off to signal Michael then headed to the rendezvous point. As the guards rushed to get the prisoners back in their cells and were ordered to shoot to kill as a riot broke out. Michael and his cell mates rushed to get out the cell through the ceiling. The other prisoners who knew of the escape made their way to Michael’s cell to try and go with him.

Michael and his cellmates got to the roof but were blocked by guards due to the prison lockdown. Meanwhile Cross and his brother got into his cell and tried to follow. Sid tried to stop them by destroying the bunk they used to climb up and then ended up falling back in himself. Ramal then arrived to try and follow but guards turned up and stopped them.

On the roof Michael and the rest tried to make a break for it but were discovered and the escape attempt failed. C-Note made it to the rendezvous but there was no Michael. He spotted the guards taking Michael and the others back inside. Ramal threatened to kill Michael for not taking him.

Elsewhere in the episode, it was revealed that the assassins that were sent to kill Sara (Sara Wayne Callies), A&W (Marina Benedict) and Van Gogh (Steve Mouzakis) were spying on her when her son Mike got the note from Michael. It was revealed that they were working for someone called Poseidon and that he ordered them to not hurt Sara.

Later Sara had a run in with T-Bag (Robert Knepper) who told her he had information. He showed her the advanced robotic hand that Outis had paid $1 million for. He pushed her to see if she knew anything or wanted to team up to find answers but she threatened him and left.

After Sara noticed her phone behaving funny she took it to an electronic repair shop in case it had been hacked. After she left, A&W and Van Gogh paid a visit to the store and roughed up the owner. They then gave chase but lost her.

The repair guy later called her to say that her phone was hacked using her own fingerprint. She realised that it must have been Kellerman (Paul Adelstein). Sara called T-Bag and said she’d learned some things. She requested he talk to Kellerman and find out everything that he knew.

At the end of the episode, Michael recorded a tearful goodbye video message to Sara. He tried to explain that he’d never stopped loving her. He requested that if he did die that she have Michael Schofield written on his headstone, not Kaniel Outis.

Check out the Prison Break 5×04 trailer below:

Here’s the synopsis for Prison Break 5×04 – The Prisoner’s Dilemma:

Michael, Whip and Ja make their last attempt to break from Ogygia, but must make a deal with the devil to do so. Lincoln races against the clock to help with the escape, as T-Bag meets with Kellerman to gather more info on Michael’s resurrection.

UK viewers can watch the next episode of Prison Break season 5 on FOX UK on Mondays at 9pm. US viewers are a week ahead and can tune in to FOX on Tuesdays at 9pm ET. Preview the episode with our gallery:

In this article:FOX, Prison Break