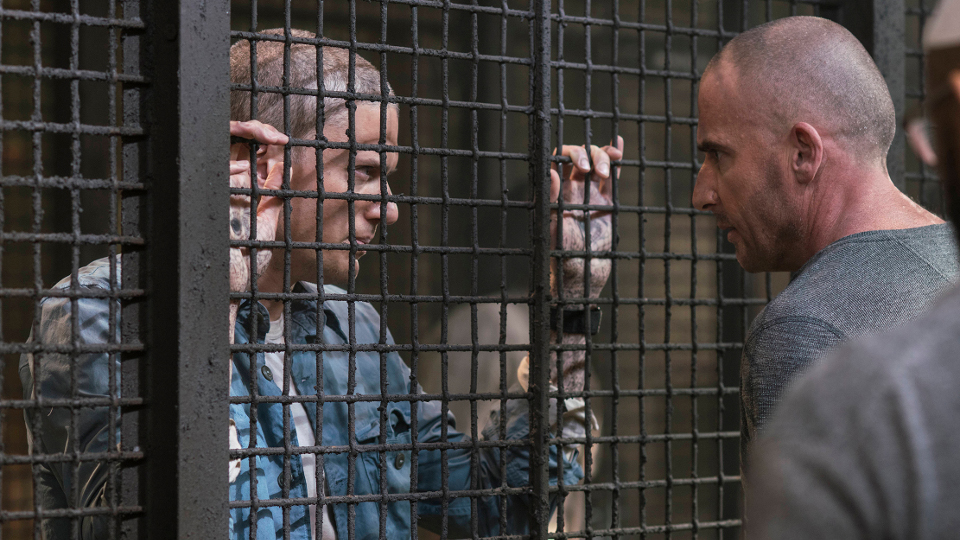 If you want to avoid spoilers for Prison Break season 5, we suggest you stop reading now. If you don’t mind then please keep reading for a recap of the premiere and a preview of episode 2.

The premiere opened up with a brief recap of past events to jog memories and bring people new to the show up to speed. The opening shots showed a glimpse of Michael Schofield (Wentworth Miller) in what appeared to be a new prison. He appeared to be sporting some new tattoo’s and having a picture of himself taken. There were also shots of his brother Lincoln (Dominic Purcell) and his wife Sara Tancredi (Sara Wayne Callies) and their son, Michael Jr. The video snippets were accompanied by a voiceover by Michael saying that ‘the dead talk… if you listen’.

The action then went back to where it all started, Fox River Penitentiary. The new season is set in present day, seven years after the events of the last season. At the prison, T-Bag (Robert Knepper) was being released. Before he left he collected his belongings which included a mysterious piece of mail and the contents surprised him.

Meanwhile, Linc had fallen back into his old ways and was on he run from a gang he owed $100,000. He managed to evade them and made it back home. There he got a surprise himself as T-Bag was waiting on his porch. Linc was never a fan of T-bag but took a look at the mail that he had received.

View the trailer for Prison Break 5×01 Ogygia below:

Inside was a single piece of paper that contained a small black and white photograph. The image appeared to show Michael but Linc thought it was impossible as to his knowledge his brother had died. Linc had to make sure that the news wasn’t a fake so he headed out to New York to visit Sara. The pair hadn’t seen each other for a long time and Sara had remarried. Sara found the news hard to believe as well.

After visiting Sara, who was still convinced that Michael was dead, Linc paid a visit to Michael’s grave. He took another look at the image and noticed something strange with the message below. Using an eraser only some of the letter remained and they formed the word ‘Ogygia’. A search on the Internet revealed that the word was actually the name of a prison in Yemen.

At night Linc decided he needed to be sure if Michael was dead or not. He went back to Michael’s grave and dug it up. Inside the casket he found nothing but Michael’s suit which he took with him.

The discover led Linc to think there might be truth in the package that T-Bag received. While driving Linc thought a car was following him. When he stopped at a lred light the car pulled up next to him and the driver hacked his car. He took control of it and drove it at speed until it went off the road and into water. Fortunately Linc managed to escape unharmed.

Linc called Sara to update her and while he was on the phone the car that followed him arrived at her house. An armed woman entered the house while Sara screamed for her husband to get a gun she had hidden. He was too slow and the woman shot him in the leg. The police arrived on the scene and the woman fled while Sara tried to save her husband.

Later at the hospital, Linc suggested to Sara that they head to Yemen. Sara wouldn’t leave her family so Linc decided to look up an old friend. He tracked down former fellow inmate C-Note (Rockmond Dunbar) to a mosque. He used to be a soldier but has now found religion. C-Note was surprised by the news but agreed to help.

He new of Ogygia, which is a prison for the worst offenders. They called the prison to see if Michael was there but they said there was no one of that name there. Another Internet search for Michael Schofield showed a different man, someone had erased all images of him. Linc decided he had no choice but to go to Yemen. C-Note tried to talk him out of it but failed.

Back at his hotel, Linc tried on Michael’s suit jacket before realising someone was in his room. He turned and hit them hard before realising it was Sucre (Amaury Nolasco). He had heard from C-Note and come to help but they wouldn’t let him go.

Linc and C-Note arrived in Yemen. Fortunately for Linc, C-Note knows Arabic and has plenty of contacts to help them. At the airport they missed their real driver and ended up with someone else. He drove them to a garage and the pair realised that it was a set-up. Out of the car they were surrounded by men but they managed to fight them off. A woman named Sheba arrived to take them to a safer place.

Linc took a look at Michael’s jacket and noticed a tag that read ‘Kaniel Outis’. Sheba arrived with a man who could get them a visit to Ogygia in return for Linc’s passport. C-Note advised against it but Linc handed it over.

Elsewhere in the episode, T-Bag decided to find himself a woman. His search was interrupted by a reminder on his computer for an appointment. It left T-Bag confused as it was with a prosthetic specialist.

T-Bag went along to the appointment, which was at 9:30pm at night. The specialist explained that an unknown party was funding his research. The funding was supplied as long as the first patient was T-Bag.

T-Bag decided to go ahead with a procedure the doctor had planned for him. At first he told him to do it without anesthetic but the doctor refused. When he awoke he was the proud owner of a state of the art robotic hand. The doctor explained that the only name he had behind the money was ‘Outis’ which is Greek for ‘Nobody’.

At the end of the episode, finally at Ogygia prison, the guard told them they had no Michael Schofield. Instead C-Note showed them the image of Michael and the guard replied ‘Kaniel Outis’. Linc knew it couldn’t be a coincidence. Sheba left annoyed and explained to C-Note that the name was that of a terrorist who works with ISIS.

The guards brought Kaniel Outis to see Linc and it was Michael. C-Note took a video of the meeting for proof. Michael told them that he wasn’t Michael and didn’t know them. He turned to walk away while speaking Arabic leaving Linc confused and screaming after him.

Check out the Prison Break 5×02 trailer below:

As Lincoln and C-Note search for the “Sheik of Light,” Michael and his cellmate, Whip (Augustus Prew), attempt an escape from Ogygia. Meanwhile, Sara’s investigation into Michael’s reappearance leads her to the state department and an uneasy reunion with Paul Kellerman (Paul Adelstein).

UK viewers can watch the next episode of Prison Break season 5 on FOX UK on Mondays at 9pm. US viewers are a week ahead and can tune in to FOX on Tuesdays at 9pm ET.

Advertisement. Scroll to continue reading.
In this article:FOX, Prison Break