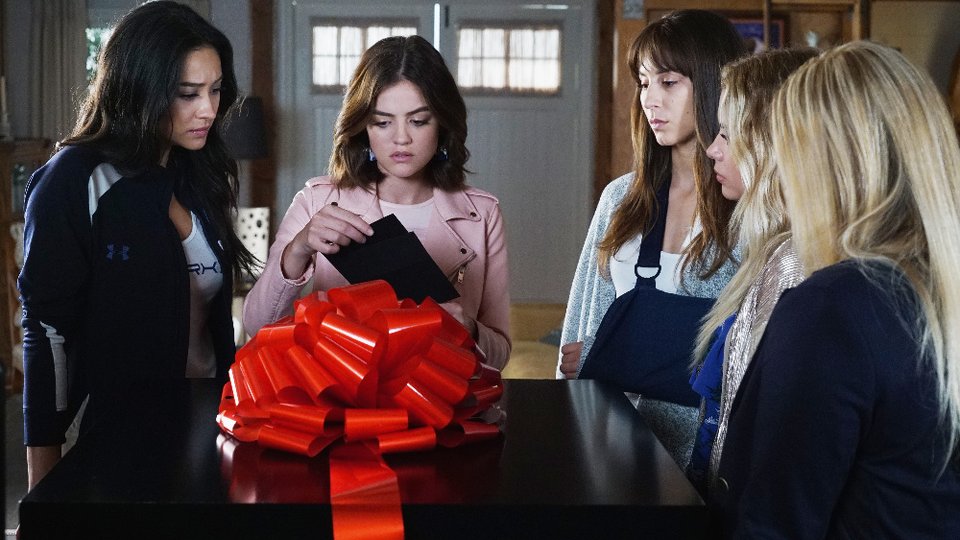 The final 10 episodes of Pretty Little Liars kick off next week as the road to finally unmasking A.D. begins.

In the winter finale Spencer’s (Troian Bellisario) life was left hanging in the balance when she was shot by Jenna (Tammin Sursok). The Liars were lured to an abandoned house by Jenna and Noel (Brant Daugherty) and while trying to attack Emily (Shay Mitchell) and Hanna (Ashley Benson), Noel accidentally beheaded himself.

Mary Drake (Andrea Parker) stopped Jenna from killing Spencer and revealed herself to be Spencer’s biological mother. Jenna was rescued by A.D. and driven away in the back of his/her van.

Elsewhere in the episode Emily and Alison (Sasha Pieterse) kissed after Alison revealed that she was pregnant, Aria (Lucy Hale) was shocked to find out that Nicole (Rebecca Breeds) is still alive, and Toby (Keegan Allen) and Yvonne (Kara Royster) were involved in a car crash.

The next episode of the season is Playtime. Spencer focuses on learning more about her connection to Mary Drake, while Aria and Ezra figure out what their future may hold now that Nicole is back in the picture. Mona helps Hanna get her fashion career back on track, and Emily struggles to balance things between Ali and Paige now that the three of them are working at Rosewood High. Meanwhile, A.D. has a special delivery for the Liars, one that reveals the final endgame. The Liars realize this latest gift pushes things to a whole new level.

Tune in to Freeform at 8/7c on Tuesday 18th April in the US and Netflix on Wednesday 19th April in the UK to see the episode. Preview it with our gallery and the promo below: