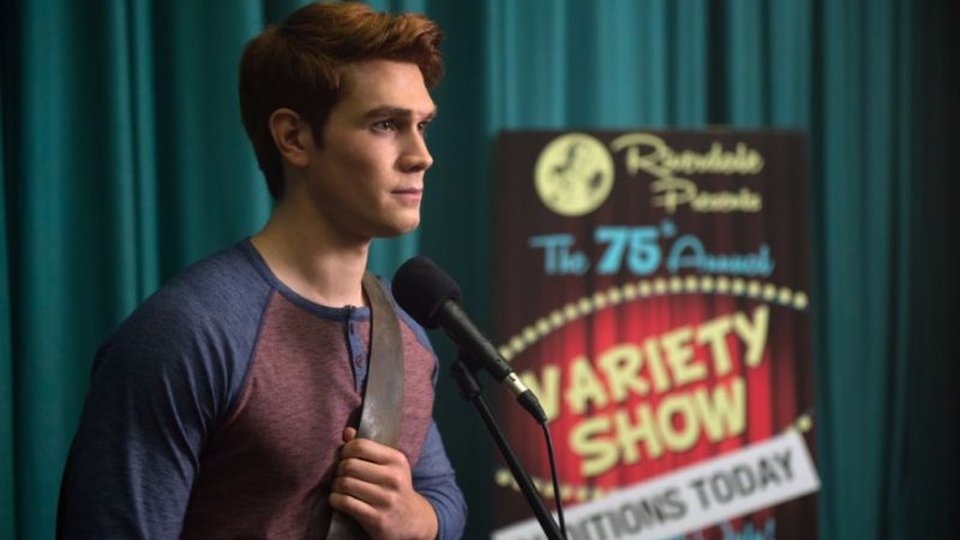 The day of Jason’s (Trevor Stines) memorial arrived on the latest episode of Riverdale.

Cheryl (Madelaine Petsch) was annoyed when her parents refused to let her speak at the service but she decided to anyway. Wearing the white dress she had on the day he went missing, Cheryl broke down and was comforted by Veronica (Camila Mendes).

After the service Betty (Lili Reinhart) and Jughead (Cole Sprouse) searched Jason’s room and they were surprised by his grandmother who was in there. The old woman mistook Betty for her sister Polly and it was revealed that Polly and Jason were secretly engaged before his death.

Betty also learned that her family had a long-running hatred for the Blossom family since their ancestor cheated the Coopers out of a fortune decades earlier. It became clear that Betty’s father stole the murder evidence.

Elsewhere in the episode Archie (K.J. Apa) battled with Reggie (Ross Butler) to become team captain. Archie won the battle but he decided his heart was in music after being turned down by a potential songwriting memoir so he gave it to Reggie.

Hermione (Marisol Nichols) found a box with a snake inside it while cleaning the diner, which was a warning from the Serpents.

The next episode of the season is Chapter Six: Faster, Pussycats! Kill! Kill! With Riverdale High’s annual variety show around the corner, Valerie’s efforts to help Archie prepare for his big performance lead to some major fallout between her and Josie.

Tune in to The CW at 9/8c in the US on Thursday and Netflix in the UK on Friday. Preview the episode with our gallery below: