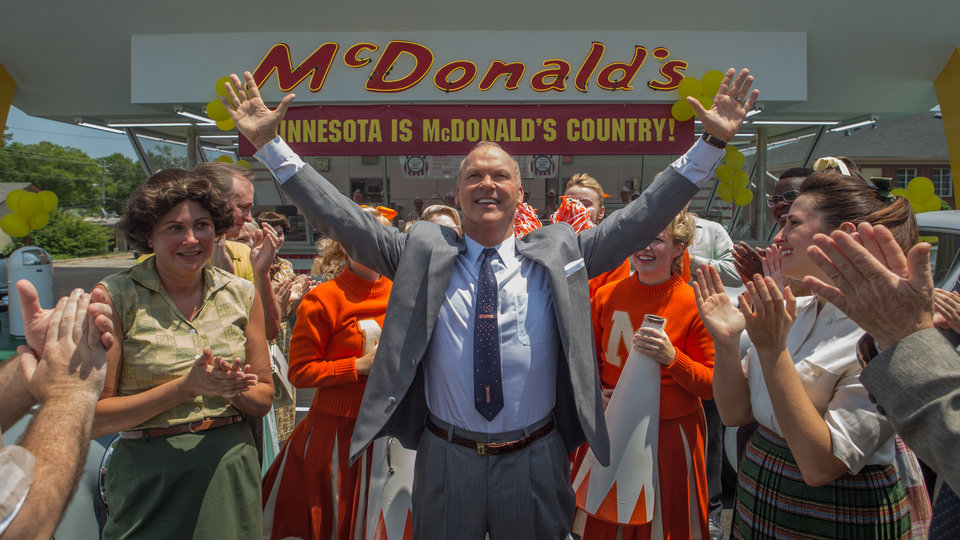 I love a sneaky McDonald’s as much as the next guy but I must admit that I never knew the company’s founding story was such a fascinating one. The Founder recounts this remarkable tale in a compelling fashion, as we look at how they grew to become the largest chain restaurant in the world, with one of the most recognisable brands across the globe.

It’s 1954 and Ray Kroc (Michael Keaton) is a travelling salesman who is struggling to make sales. His latest item is a multi-milkshake maker that is falling on deaf ears until he gets a bulk order from a small restaurant in San Bernardino, California named McDonald’s. So Ray hits the road and goes to see for himself why this restaurant seems to be doing storming business when everyone else is just getting by.

When he arrives there he witnesses a revelation in food service. Meeting the owners of McDonald’s, brothers Dick (Nick Offerman) and Mac (John Carroll Lynch) McDonald, Ray believes he has found the future for this industry. People come from miles around to enjoy their hamburgers, fries and milkshakes and they have created a fast new way of delivering their product to their customers. But the brothers are very reluctant to branch out as they feel that the quality would be compromised if they couldn’t oversee the process themselves.

So Ray uses this opportunity to convince them to let him franchise their idea out across the country. But as Ray increases the McDonald’s brand he constantly challenges the brothers to make changes to pull in more money. This ultimately leads to the McDonald’s brothers heading on a collision course with Ray Croc, who believes that his ideas are what’s best for the business.

This is ultimately a story about pursuing the American dream and in Michael Keaton the film has a very charismatic and engaging lead to follow. It will come as no surprise to learn that Ray Croc isn’t a particularly nice person but you do stay on his story thanks to a sensational leading performance from Keaton. H e is helped along with a great supporting cast led by the McDonald’s brothers Nick Offerman and John Carroll Lynch. Laura Dern is great as Ray’s quiet but long-suffering wife Ethel and there are great cameos to be found from the likes of Linda Cardellini, Patrick Wilson and B.J. Novak.

The Founder constantly surprises you and proves that sometimes fact is much more fascinating than fiction. The film looks as sumptuous as a freshly grilled cheeseburger too and that’s down to director John Lee Hancock who really brings out the human element and nails the feel of 50s nostalgic Americana. With Keaton on sensational form and a story that is genuinely interesting, The Founder is a rare gem to find and one that delivers a very engaging story.