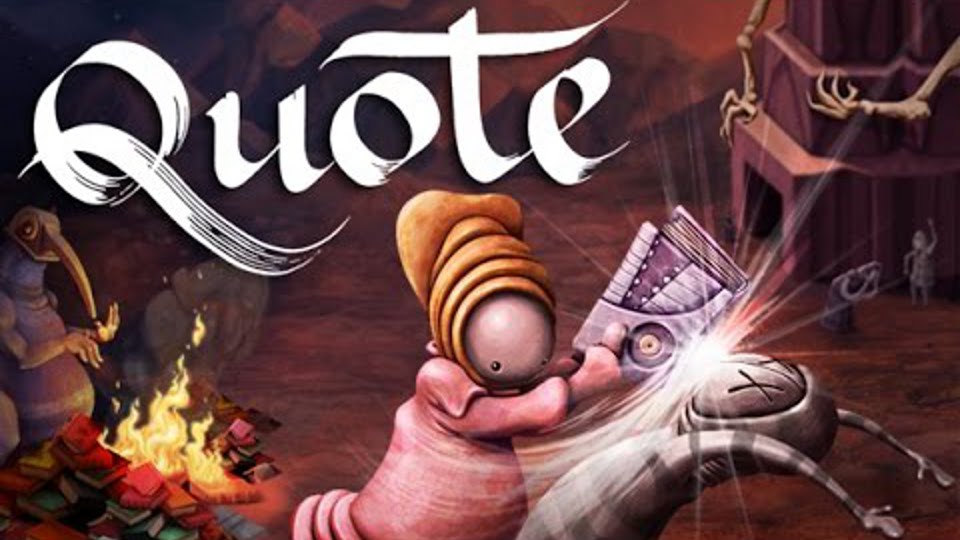 Quote is the debut title from London-based indie studio, Vindit. The game is an Action-RPG with a dark sense of humour and a distinctive surrealist art-style. The game has been in development for over two years and has just arrived on Steam Early Access.

In Quote, the world has been purged of knowledge by Bliss, the God of Ignorance. However, knowledge is returning and players must take control of Novella, priestess of Bliss to eradicate it once more by destroying books and killing authors. Helping Novella in her quest is a strange avian companion called Tatters. He follows her around and has a voracious appetite for books.

The world around Novella is often completely bonkers thanks to the art-style and the literature that it takes inspiration from. You really never know what you’re going to be faced with next. There’s so much detail that I often found myself taking the time to stop and look. Some of the best parts are the giant creatures that often crop up in the backgrounds.

As you explore, speech bubbles appear to explain things and these are also narrated to you. At times Bliss also speaks to you and his thoughts are often brilliant. The writing and voice-acting is top notch and really adds a lot to the game.

Novella is controlled using the WASD keys to move and the mouse for combat. A left-click throws a punch while a right-click performs a push. Sometimes enemies block so you must push them to break the block. Pushing is also useful for knocking them into flames to burn them alive.

Novella carries a stone book given to her by Bliss that she uses to bludgeon the thoughts from the minds of those that cross her. The book can also be thrown by aiming with the mouse and tapping Spacebar. Doing so teleports Novella to where the book lands and it becomes a useful strategy for evading enemies and traversing the world quickly. Holding Spacebar calls Tatters to the book.

As you find books in the world you must feed them to Tatters. These sit in his stomach and can be digested in order to improve your abilities as well as learning new ones. It’s an unusual idea but one that fits the bizarre world around you perfectly. Each of his ribs represent a different skill and eventually you can improve your health, do more damage and learn new attacks.

The combat is satisfying and chaining attacks together results in combos. Once you’ve built a combo the book can be used by holding shift to perform more powerful attacks. Once you’ve learnt more abilities you gain access to new ways to kill such as holding the Q key to charge a special multi-target attack.

As you make your way around the world Novella comes across bundles of coloured letters. She must absorb these and they are then stored in different pockets of her brain. Initially these make no sense but the collected letters eventually form complete quotes. Each quote is paired to a particular mini-dungeon and having a completed quote lowers the difficulty. If you haven’t found the necessary quote you can still attempt a dungeon but be warned you’re in for a much tougher time.

Unlike most other Action-RPG’s, Quote doesn’t have you collecting endless piles of pointless loot. Your aim is simply to destroy knowledge so there is no need for gold, weapons and armour sets. However there are trinkets to collect during your quest.

Novella can carry many trinkets but can only have two equipped at a time. You can swap trinkets around as much as you like. Each trinket has a passive effect on Novella or Tatters such as increased damage or movement speed. They also each have a partial quote associated with them.

Some parts of the game require you to find particular trinkets in order to progress. They are used to solve puzzles such as giving an NPC an item they need or combining them with another item. When paired correctly the partial quotes combine to form a full quote. It’s a really neat system and it works really well.

It’s worth pointing out that Early Access games are still in development and there are usually bugs still to be fixed as well as missing features. The parts of Quote that are currently present are incredibly polished. During the several hours that I’ve spent with Quote so far I only encountered a few bugs. Some of these are very minor such as a character shadow out of place, a spelling mistake, missing narration or being unable to enter a dungeon until I was stood in a specific position.

Others are a little more serious such as occasionally you seem to get stuck on the environment forcing you to throw your book to escape. Twice I found it impossible to get Tatters to come to where I needed him, however a quick save and reload sorted this out. Sometimes he seems to get confused if there are lots of dead enemies in his way. I also occasionally found Novella lost the ability to attack for short periods of time.

View some screenshots from Quote in our gallery:

Quote is off to a very promising start and I’ve thoroughly enjoyed my time with it so far. I’m already looking forward to the next chapters and can’t wait to see what Vindit have in store. If they can keep up the quality throughout the final two-thirds of the game they’ll have a winner on their hands. If you’re a fan of Action-RPG titles and enjoy a twisted sense of humour then add Quote to the top of your gaming wishlist.

To find out more about the game check out the official Quote website. Quote is available now on Steam Early Access priced at £11.99 (15% limited launch discount) and is due for a full release later in 2017.