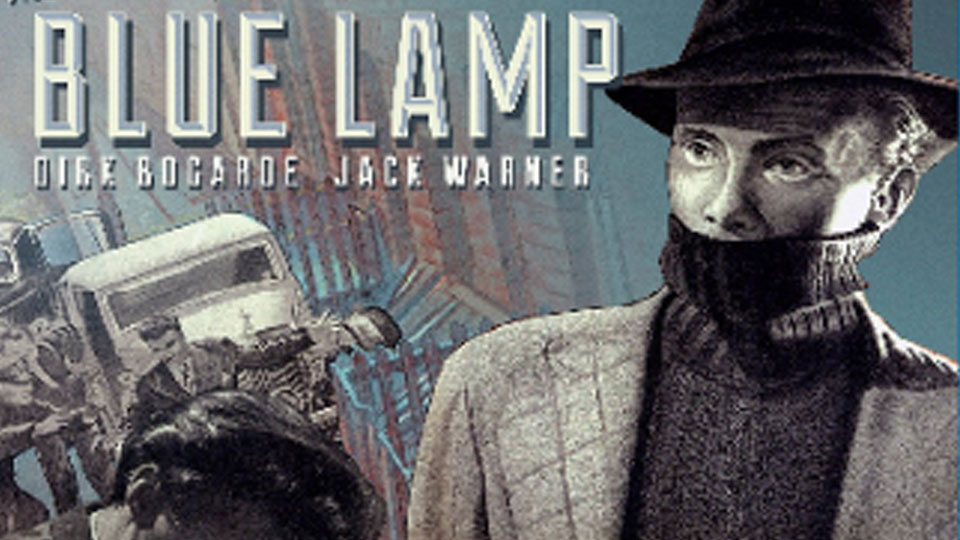 The Blue Lamp, a classic 1950 British film from the Ealing Studios, directed by Basil Dearden and starring Dirk Bogarde, is available in high definition.

Now regarded as one of Britain’s finest ever film actors, it is easy to forget that the career of Dirk Bogarde progressed through several stages, from young matinee idol, to Britain’s biggest film star for nearly two decades, to a highly respected actor who risked his image and reputation by taking a variety of courageous decisions. He played gay in Victim in 1960 (seven years before homosexuality was finally decriminalised in England, and long before it was fashionable for leading stars) and collaborated with Visconti on the remarkable adaptation of Death in Venice.

In terms of his acting career, The Blue Lamp has never been the film most closely associated with Bogarde’s name. However, it represented a milestone for him, as it’s one of the first and only times he was asked to play the anti-hero, and he appears as young crook Tom Riley (1952’s Hunted, and 1974’s The Night Porter also see the dark side of Bogarde).

The title, which may seem archaic now, is in reference to the light outside stations denoting the police force, and The Blue Lamp is made as an almost documentary-style piece on the day-to-day running of the London police force. That isn’t to say The Blue Lamp predicted mockumentaries half a century before their omnipresence in the entertainment sphere, but an opening caption enthuses the gratitude the producers wish to convey to the almost unfettered access to the police force they were granted in order to make the picture, and a voiceover describes the daily activities of the police in the opening scenes. There’s also a rare abundance of location filming around London which creates a sense of reality. History buffs will enjoy seeing the much-changed streets of the post-war capital, and an extra feature on the disc which takes viewers on a tour of the locations as they are now is a fascinating addition. There’s a climactic scene shot at White City Stadium (demolished in 1985) whilst the greyhounds are running, which is brilliantly handled by director Basil Dearden – one of Britain’s finest of that era. The whole film can be viewed now as an insight into the mostly disappeared world of the recent past.

We are also introduced to a few police officers whose story we follow. This includes the amiable Jack Warner, who off the back of the movie would go on to make Dixon of Dock Green. The narrative shifts between the police force and the villains, which creates an unfortunate lack of focus. A single leading character would have made for more compelling viewing.

Naturally, nearly sixty years on, The Blue Lamp is a rather dated look at the ‘modern’ police force. Whilst an accurate representation of the pre-walkie-talkies and pre-internet and satellite navigation-era of policing, the film also lends a wholesome, somewhat inaccurately quaint view of the British police that was not seriously challenged until The Sweeney hurtled onto the small screen two and a half decades later. Some of the acting is also rather more stiff and self-conscious than we are used to now. It is interesting, however, to see a brooding young Bogarde (still in his 20s at this time) stealing every scene he is in. Combined with Basil Dearden’s excellent direction that maintains a cracking pace, The Blue Lamp is a better drama than it deserves to be. Layers of historical interest add to the appeal. There are a few extras on the disc, such as a radio play in which journalist Simon Heffer assesses the film.