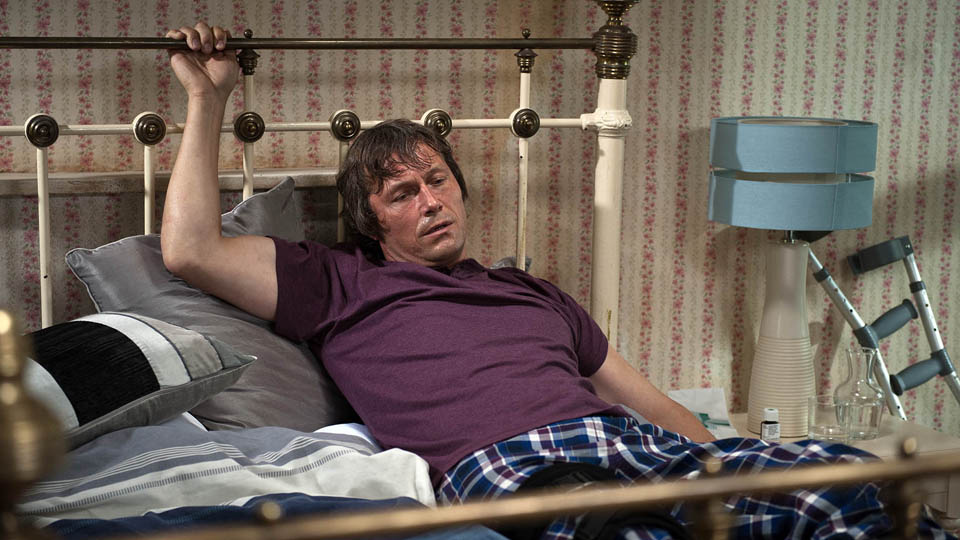 Welcome to our regular look ahead to what’s going to happen to the residents of our favourite Yorkshire village, Emmerdale this week.  There’s big trouble for James and Rakesh and Robert schemes against Chrissie.

As the day of the big move arrives, Ross confronts James over what he said to Moira and gives him a hard shove that causes him to fall down the stairs and break his leg.  At the hospital, Ross won’t let up and confronts James too, unaware that Emma is listening in and she’s left devastated.

Later, James reassures Moira that Ross will keep tight lipped about their fumble, but Emma sees them from a far and begins to fume.  She tells James she’s been given permission to nurse him at home.  She finds her old wedding dress and encourages James to plan their wedding whilst he’s in recovery but he’s less than enthusiastic.  When Emma hears James calling Moira, it pushes her over the edge and a homemade apple pie may not be all it seems.

James awakens feeling groggy and panics he’s going to miss the funeral.  Emma promises she’ll wake him in time, so why does he hear her telling Pete he’s fast asleep and can’t make the funeral?  When Emma then refuses to give him his phone, he knows she’s planning something and he doesn’t have too long to wait to find out what when he lets the cat eat his food.

When James questions Emma she avoids answering and leaves the room.  James tries to leave but slips falling on his bad leg and screams in agony as he falls.  Emma pretends to call for an ambulance but instead texts Pete from James’ phone before destroying it.  She’s unaware that James has seen exactly what’s she’s done and he realises he’s trapped in his own home.  It looks like a nasty case of Misery as James soon understands Emma plans to keep him there forever…

Despite being anxious about Rakesh’s return, Priya organises a welcome-home do, but is suspicious that it’s Chrissie he’s having an affair with.  Chrissie denies it but Priya steals her phone and is heartbroken by what she finds.  Rakesh gets a slap for his home-coming and accuses him of sleeping with Chrissie.  Will he finally come clean about his financial problems?

Next day he’s reeling from last night’s events and things go from bad to worse when he learns Mill is being repossessed.  Priya sprays ‘Whore’ on Chrissie’s car and receives a warning from Chrissie to get Rakesh out of her life before he hurts her.  Back at the B&B Rakesh is embarrassed when his card is declined and desperately checks his life insurance; things have hit rock bottom.

Feeling like he has no way out, Rakesh makes preparations.  He gives Johnny a toy that belonged to Kirin and holds him for what he thinks will be the last time.  Just how desperate is he and can Priya, Jai or Rishi stop him doing something stupid?

There’s a newcomer to the village this week and she makes a big entrance.  As Ashley begins his speech at the Dementia event he’s interrupted by the whir of a helicopter;  Rebecca, Chrissie’s sister has arrived.  Her big entrance has further drama when the first thing she does is slap Robert for what he did to Chrissie.

All is not what it first appears however as we learn when Robert tells Aaron that Rebecca is actually his spy.  He wants her to get a DNA test for Lawrence to gain some leverage against Chrissie.  Rebecca reassures him the test has been sent off and she’s surprised to see how close he is to Aaron.  Does she have an ulterior motive for helping Robert?

She puts temptation in Robert’s path by offering him half of everything at Home Farm as she tries to seduce him.  Will the old Robert take the bait?

As a church problem looms for Dotty’s christening, Laurel is oblivious to Ashley struggling to stand in the next room.

Lawrence tells Bernice he is trying hard to be a better person and she challenges him to tell her the truth about Andy.

Rhona is uncomfortable about going on a call out with Paddy as she doesn’t want to be left alone with him.  Things must go well as soon Rhona is letting Paddy see Leo, much to Pierce’s anger.  Is he about to show another side?

Moira warns Cain to stay away and he ends up out on a bender with Charity instead.