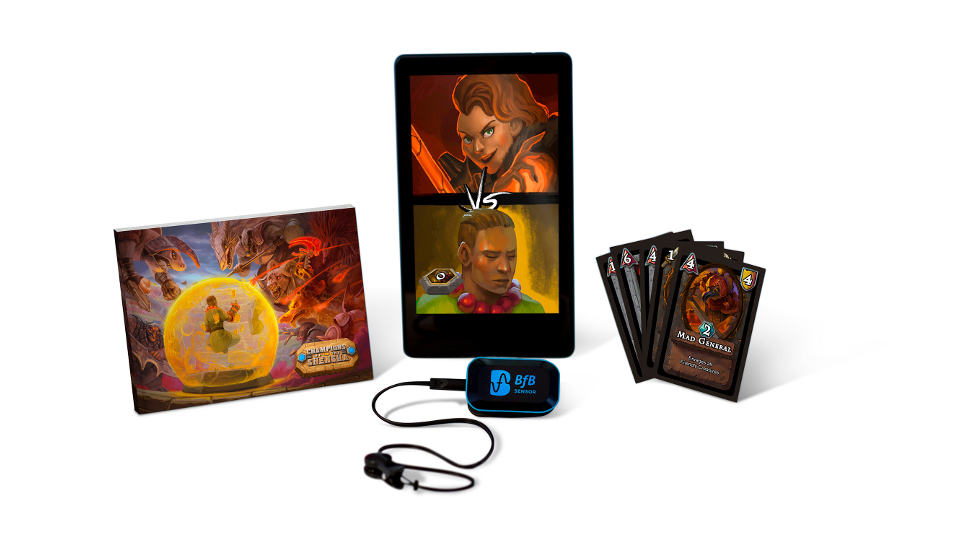 British tech startup BfB Labs is paving the way for a new generation of games controlled by our emotions, with the release of its innovative Emotionally Responsive Gaming (ERG) platform.

Through the integration of bio-monitors, ERG adds a new dimension to gameplay by bringing the emotional state of players directly into the experience, rewarding those who can control their feelings and stay calm under pressure. BfB Labs games are driven by the BfB Sensor, a small Bluetooth ear clip that measures one’s emotional state by tracking changes to heart rate data and streaming them directly into gameplay.

The London-based firm, which received early R&D support from Google, believes that ERG is set to become the next video entertainment battleground, as Chief Operating Officer Duncan Brown, explains:

“The sector is currently focused on improving the physicality of gameplay through VR and AR, or a forever evolving challenge via Artificial Intelligence. What we’re doing is challenging players with not only conquering the strategic challenges of the game, but keeping a cool head whilst doing it.

“Our BfB Sensor is the nearest we can get to exporting an individual’s psyche into a game. We know stress and pressure affect our judgement and how we perform in the real world, so to be the first to transport those same biometrics into a virtual world is really very exciting and will open a whole new world of possibilities.”

BfB Labs are bringing ERG to life with the release of its first title – Champions of the Shengha. The title is a fantasy card-battling game where players are challenged to combine their strategy skills with emotional control on the way to becoming the ultimate Shengha warrior.

Watch a teaser trailer for Champions of the Shenga below:

Throughout the game, players collect a selection of powerful spells, creatures, weapons and armour, each of which represent different attacking and defensive strengths. To use these in battle and make them more powerful, players must summon their inner strength and stay focused. The game helps players master these skills through the use of breathing techniques that can rapidly bring players into the zone and boost their performance.

“Fantasy card battles are a classic gaming genre and for our very first foray into the world of ERG, we felt it was the right avenue from both a player engagement and technical perspective. We’ve never had a game that not only displays your self-control levels, but also makes your emotional discipline a critical part of your performance. With ERG and the BfB Sensor, how well you manage your feelings is actually a bigger factor in your progress than your strategic skills, which has never been done before.

“If you look at martial arts – the common theme between all the different disciplines is self-control, the ability to find that inner peace, that emotional balance, and transform it into a key strength as you prepare for combat. That, more than your physical power, is what determines your future success. I like that famous saying by Chinese philosopher Lao Tzu, ‘The best fighter is never angry’. There is a nice parallel here with what we’ve set out to achieve with ERG.”

The BfB Labs team ran six trials of Champions of the Shengha over the last year, with groups of between ten and 100 players playing regularly for one to four weeks. Results have shown not only that players quickly learn to apply new skills of emotional control in the game, but that they start to use them in their everyday lives, to deal with stressful situations. This, says the company, demonstrates the exciting potential of ERG to equip gamers with valuable life skills, while adding a new dimension to their gaming experience.

View some images of Champions of the Shenga in our gallery below:

“Our students were really motivated to learn how to breath properly, control their emotions and put lots of practice staying cool and focused – the kind of things that we can never normally get them to do! Many of them started to use what they’d learned straightaway – to prepare for tests or deal with issues with their family or friends. It’s certainly been a very interesting experience to be a part of.”

Aside from its debut tile, BfB Labs is developing a series of follow-on games which will further bring the ERG concept to life. ‘Await Rescue’, which casts you as an astronaut stranded in deep space, will challenge you to keep control of your mind and body as you risk your life to repair your ship. In ‘Big Steal’ – a noir inflected crime thriller experienced from the other side of the interrogation table – staying cool under pressure will be the key to success as you hide secret information from the cops on your trail and, when caught, try and overcome increasingly taxing investigations.

“Champions of the Shengha is a pioneering ERG title and its development, complexity and legacy will improve tenfold as we continue to learn and explore the possibilities. The potential for ERG is endless. Imagine a cup final penalty shootout on FIFA where keeping your nerve aids your player’s striking ability. A shock zombie attack on Resident Evil causes the character to panic and lose momentary control. Or a player’s ability to get into the zone helps you be a better sniper on Call of Duty.

“These are emotions and biological reactions that all gamers experience and the prospect of incorporating them into the virtual gameplay is going to revolutionise video entertainment as we know it.”

To learn more or to pledge your support check out the Champions of the Shengha indiegogo campaign.