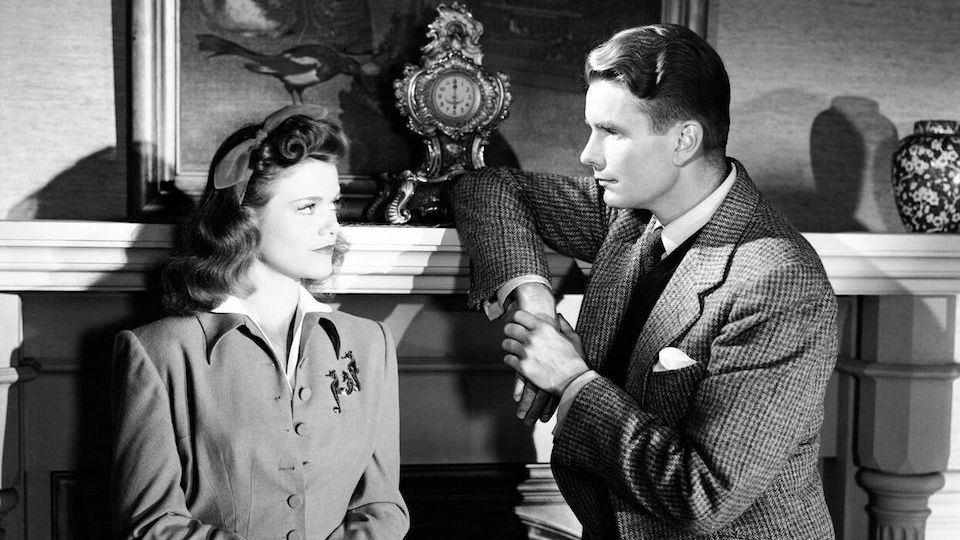 “Less is more” is a phrase you hear a lot in the film world. Some of the greatest films ever made are a result of the less is more approach, whether by choice or necessity. Films such as Jaws, Alien, and The Blair Witch Project have shocked, thrilled and entertained us, sometimes with as little as two notes of music, a pixel flashing on a screen, or in the case of the Blair Witch, nothing at all.

Cat People, directed by Jacques Tourneur and produced by Val Lewton is ground zero for this technique. Working from a miniscule budget, with only a few sets, and hardly any special effects, they crafted a startlingly effective film. The precise camera work, detailed mise-en-scene, and expressionist use of light and dark are all used to build tension and deepen the sense of unease that runs through the film.

Cat People stars French actress Simone Simon as Irena, whom we first meet at a zoo where she is sketching a panther. Whilst there she meets Oliver (Kent Smith) and soon after they fall in love. Irena is originally from Serbia, and she tells Oliver a legend from her village, of witches and Satan worshippers who could take the form of cats. For Irena this is not a legend or a fairy tale, but something real that she genuinely fears.

When Irena and Oliver announce their engagement, she is confronted in a restaurant by a woman, who is styled like a kind of proto-Catwoman (tight black outfit and headwear giving the impression of ears). She speaks to Irena in Serbian, calling her “my sister”. This encounter deeply unsettles Irena, adding to her fear that she is a descendant of the evil-doers from her village.

There is no intimacy in her relationship with Oliver. Even after they are married, they have never so much as kissed, so afraid is Irena that sexual arousal will unleash the evil within her. As she seeks counsel with a therapist, Oliver begins to spend more time at the office with his attractive co-worker Alice (Jane Randolph).

It is Irena’s jealousy of this friendship that leads to two of the most outstanding scenes in the film. First as Alice walks home on an empty street and begins to think that she is being followed. Nothing is seen or heard, but Tourneur’s direction makes the viewer, like Alice, think that something is out there. The scene culminates with the famous “Lewton Bus” jump scare – a technique that is still widely used in contemporary horror.

Soon after, still jealous of Alice, Irena follows her to a swimming pool. Alice is the only person there, and she starts to hear a growling sound. As she treads water in the centre of the pool, the water reflects the light on the wall, causing a disorienting shimmer into which an ominous shadow lurks. This exquisite use of sound and light creates a terrifying atmosphere, reaching a crescendo when Alice’s piercing scream echoes around the pool.

Tourneur’s masterful direction leaves you in a cold sweat having shown you almost nothing. There are little hints of horror – bloody paw prints becoming shoe prints, a torn bath robe – but no overt moment where it slides into genre convention. It is a film of secrets and shadows, of surprises lurking under the surface. A Freudian psycho-sexual horror, made nearly two decades before Hitchcock introduced us to Norman Bates. It is a masterpiece.

On the disc there is a commentary from film historian Gregory Mank, recorded in 2005, as well some excerpts from an audio interview with Simone Simon. The main event of the special features is the 2008 full-length documentary, Val Lewton: The Man in the Shadows. Written and directed by Kent Jones and narrated by Martin Scorsese, the film explores the life and career of the legendary producer.

There is also a 1977 interview with Jacques Tourneur, from the French television show Ciné regards. In an interview recorded especially for Criterion, cinematographer John Bailey discusses how Nicholas Musuraca achieved the extraordinary look of Cat People. The supplementary material is concluded with the original trailer, and an essay by critic Geoffrey O’Brien.