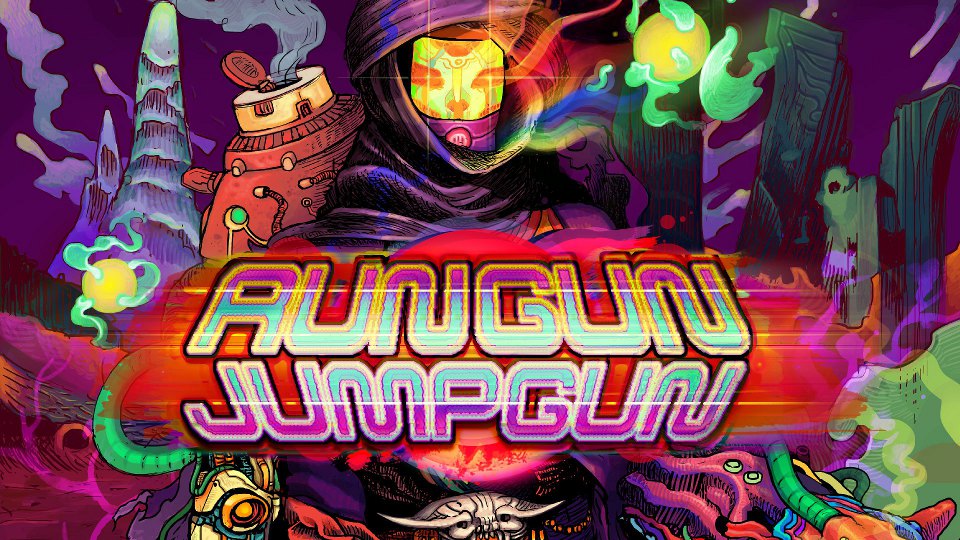 These days most games seem to want to teach us how to do everything, hold our hands and give us frequent checkpoints. It wasn’t always like this and like me, RunGunJumpGun remembers a time when games used to be near impossible to play. Games often used to be so difficult that beating a single screen or level used to feel like a fantastic achievement.

The game is a 2D automatic runner with a lovely retro aesthetic. There’s a simple backstory where the sun is dying and naturally it’s your job to save the universe. You do this by collecting items known as Atomiks. These are scattered throughout 120 levels which are split across three worlds each comprised of four acts. The second two worlds need to be unlocked by collecting a set number of Atomiks.

Watch the RunGunJumpGun launch trailer below:

Despite being hard as nails it’s actually very simple to play. The player takes control of an astronaut who carries a powerful, gravity-defying gun. The default controls are left shift key to fire the gun down to lift you into the air while right shift shoots things in front of you.

Your aim is to get from one end of the level to the other. Each level is relatively short but packed full of hazards to hinder your progress. There’s spikes, explosive barrels, lasers and spinning blades and more. Things start off quite simple but gradually get tougher until the later levels which are completely insane.

As soon as you touch a hazard that’s your attempt at the level over and you warp back to the start. As the game doesn’t throw you back to a menu or require a key press your next attempt begins immediately. This makes it insanely addictive and near impossible to not just have another go. Before I knew it I’d racked up hundreds of deaths and just couldn’t stop playing.

View screenshots from RunGunJumpGun in our gallery below:

The action is frantic and at times can be frustrating when you get stuck. There’s just enough time after dying to shout out a string of expletives before you’ve forgotten about your failure and get ready to do it all again. Muscle memory kicks in after multiple attempts and eventually you find yourself in a trance like state as you perfect your route.

Just reaching the end of a level brings an immense feeling of satisfaction. However to truly beat it you need to collect all the Atomiks along the way and this is a fierce challenge for even the most competitive players.

RunGunJumpGun is an absolute delight for players who enjoy their games tough with a side helping of impossible. I completely adored it and will be going back to it for a long time to come. However if difficult isn’t your thing or you have a bit of a temper then it might be best to skip this one. You have been warned.

Advertisement. Scroll to continue reading.
In this article:PC, RunGunJumpGun, Steam