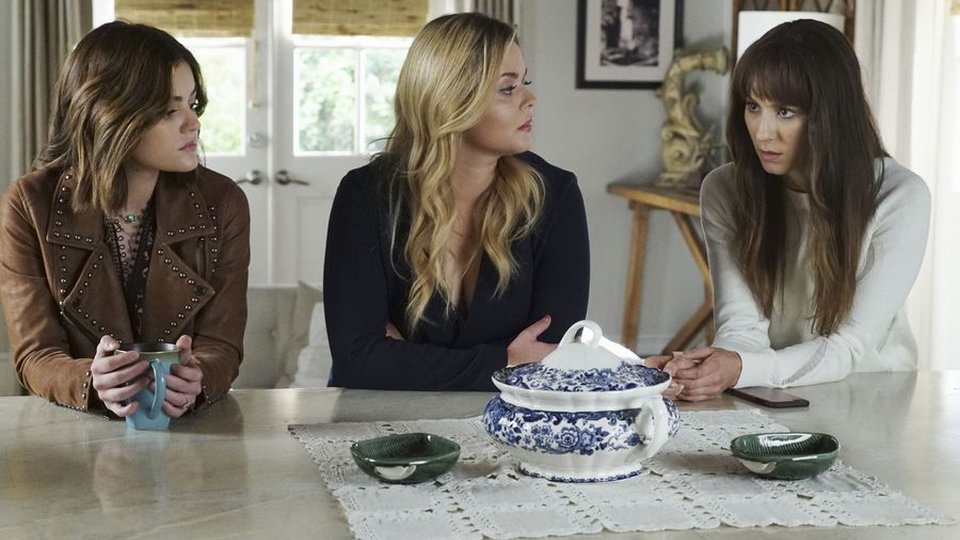 The Pretty Little Liars promised a #PLLDeathTrap and it definitely didn’t disappoint.

If you haven’t seen the Pretty Little Liars summer finale and want to avoid spoilers, we suggest you stop reading now. If you have seen it and want to relive the action then keep reading.

Hanna (Ashley Benson) tried to scare a confession out of Noel (Brant Daugherty) but he couldn’t stay conscious long enough to tell her anything. Instead Hanna decided to take things into her own hands by collecting a sample of Noel’s blood (by way of slicing his leg open with a knife) and taking it to a lab to prove he was Mary’s (Andrea Parker) other child.

Meanwhile Spencer (Troian Bellisario) and the other Liars decided to call the police, fearing that Hanna had been kidnapped. When Hanna and Noel were all over the news, Hanna decided to call in Mona (Janel Parrish) to help her get out of the situation. Mona coached her to tell a story about trying to locate the girl that Noel pushed down he stairs years earlier but warned her not to admit what she’d really done. She also found the flashdrive in Noel’s boot, which Hanna took.

Returning to her friends, Hanna was greeted by an over protective Caleb (Tyler Blackburn) who escorted her home and the two got into an argument. That led to a kiss, which led to the former couple making love and being honest about their feelings towards each other. The next morning Hanna received a call from the lab confirming that Noel wasn’t Mary’s child.

With that knowledge, Hanna came clean to her friends about what really happened with Noel and when they went to visit him, they found he was gone and so was the camera, which contained the footage of Hanna trying to force Noel to confess.

Bun in the oven

Alison (Sasha Pieterse) complained of feeling nauseous this week and it wasn’t because Paige (Lindsey Shaw) was doing her best to get back together with Emily (Shay Mitchell). Turns out Ali is carrying Archer’s baby and as she panicked about what to do, she turned to Emily for help. Emily agreed to stay with Ali over night and the two enjoyed a smooching session. The next morning Emily heard Paige arguing with the police outside and she went to speak with her, only to get a tirade about Ali manipulating Emily once again before storming off.

Back from the dead

Aria patiently waited at Ezra’s (Ian Harding) apartment for him to get home but began to panic when he didn’t arrive. After a quick fight with the airline on the phone, who refused to give her any information, Aria turned on the TV to discover that Ezra was still in Colombia and that Nicole (Rebecca Breeds) had been found alive and well. She also witnessed her fiancé giving his ex a passionate kiss. Is this the end for Ezria?

With Noel gone, the Liars received a text from A.D. calling them to a meeting later that night at an abandoned blind institute. The girls slipped past their police security and arrived at the location where they were asked by Jenna (Tammin Sursok) to turn in the flashdrive in exchange for Hanna’s camera. Mona and Caleb stayed at The Radley where they were fooled by Jenna who got Sydney (Chloe Bridges) to dress up like her so they didn’t notice her leave.

The girls soon realised that the meeting was a set-up and Noel went after Emily and Hanna with an axe. The girls fought with him and a freak accident occurred with Noel’s head being chopped off and rolling down the stairs following a forceful punch from Emily that pushed him onto the axe. Aria, Spencer and Ali tried to evade a gun-wielding Jenna who fired her gun. It was revealed that Spencer had been shot but was it Jenna that did it?

Meanwhile Toby (Keegan Allen) and Yvonne (Kara Royster) packed up their things and left town. Earlier Toby and Spencer had shared a kiss goodbye, which seemed to stir up some old feelings even if Spencer was getting closer to Detective Fury (Nicholas Gonzalez). It seems that Toby and Yvonne didn’t get too far though as they were involved in a car crash that left them both unconscious and injured.

As the Liars went to Spencer’s rescue, they found her lying on the floor wounded and being cradled by Mary. Confused as to why Mary was there, the Liars were shocked when Mary revealed that Spencer was her daughter and she promised that she would never hurt her. Jenna meanwhile was dragged away by A.D. and put into the back of a van. She asked A.D. if it was them that shot Spencer before the A.D. drove away with Jenna.

Pretty Little Liars returns to Freeform in the US and Netflix in the UK for its final 10 episodes in April 2017. Watch the teaser trailer for the final episodes below: