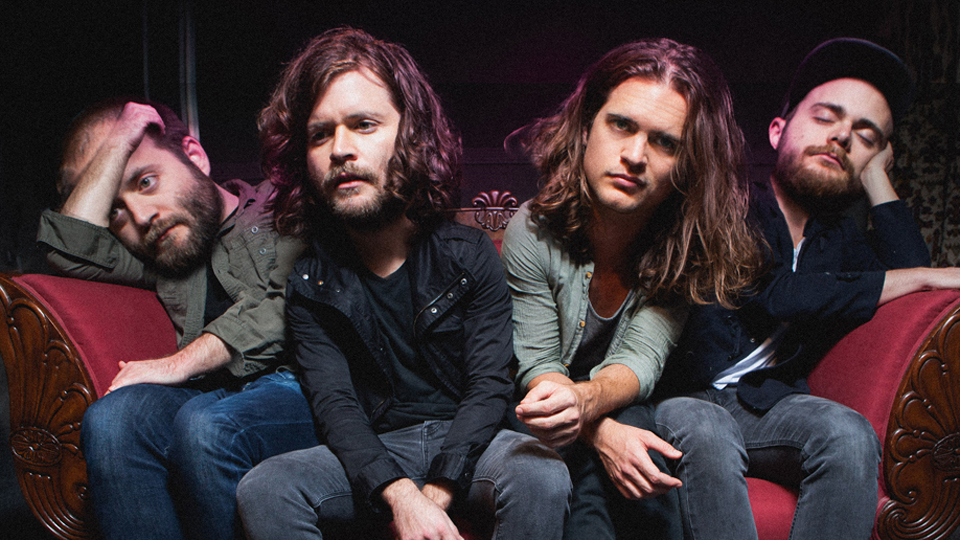 Rock band Kongos recently released their third album Egomaniac following the success of lead single Take It From Me.

The band – which consists of Dylan Kongos, Daniel Kongos, Jesse Kongos and Johnny Kongos – started to attract attention when their song Come With Me Now was used in the film Holy Motors, the video game Borderlands: The Pre-Sequel and The Expendables 3.

We are great. We had an awesome show at Dingwalls last night.

Where does this Q&A find you?

We’re at our record label, Sony in London.

Your new album Egomanic was released in June. Can you tell me a bit about the journey of the album?

There was a year or two of sort of downtime between all the success we had in South Africa and nothing happening in America so we wrote a ton of songs. We were talking about how we’re living in the pinnacle of narcissism and Danny said the word Egomaniac and it clicked. We wanted to follow our previous album Lunatic with another word about the human condition and we thought that Egomaniac made a great album title. After that it was a case of picking all the songs that were related to that theme and putting the others on the back burner.

The album blends classic rhythms with more modern sounds. Can you tell me what your writing process is?

It starts with the songs for us. The demo will be written quite simply, just piano or guitar but we have a particular sort of vague essence, that we think is our sound. We can take a song in a bare form and think, how do we make this Kongos? The production is where we want to push it forward. We listen to a wide range of music from ancient music to modern pop and hip hop. Production wise hip hop and pop are more adventurous and are pushing production forward even if you’re not a fan of the songs. That’s influenced us in somehow melding this ancient tribal thing with a modern sound.

We tend to write demos individually and get a nearly finished demo out of them. We get it as polished as possible so that it receives as little criticism from the rest of the band as possible!

Some of the tracks seem to be inspired by exotic sounds from other countries. Where does the inspiration come from?

There are definitely a wide range of influences on the album. We do listen to music from all around the world and that, consciously and unconsciously bleeds into our sound.

Our musical inspirations list is endless, but the most obvious ones would probably be Paul Simon, Bob Marley, definitely our dad and lots of obscure ones like Erik Satie, the French composer.

You are embarking on a mammoth tour this summer. Is there anywhere you particularly look forward to playing?

Top of the list is Chicago as we haven’t done a headline show there for two or three years. Since we last played there we’ve added LED walls, projector screens and some more props, so it’ll be great for the fans to see the full 90 minute set with all the staging too. It’s one of the biggest shows on the tour and we’re really excited, it’s always a great crowd.

How do you prepare for your live tours?

Most of our touring in the beginning was just us and maybe one other guy, so we had to do everything ourselves. By the time we got a crew we just thought let’s just chill out and just walk on stage when we’re ready.

Do you have any rituals before shows?

When we did it all ourselves the ritual was is that cable plugged in or is this amp working? Now it’s probably just making sure the four of us are all ready when we need to be.

What will be the band’s next single?

At the moment we’re focusing on Take It From Me so honestly haven’t thought about what the next single will be.

After the album and tour what are you planning?

We’re pretty much touring now until middle of December and then we’ll take vacations!