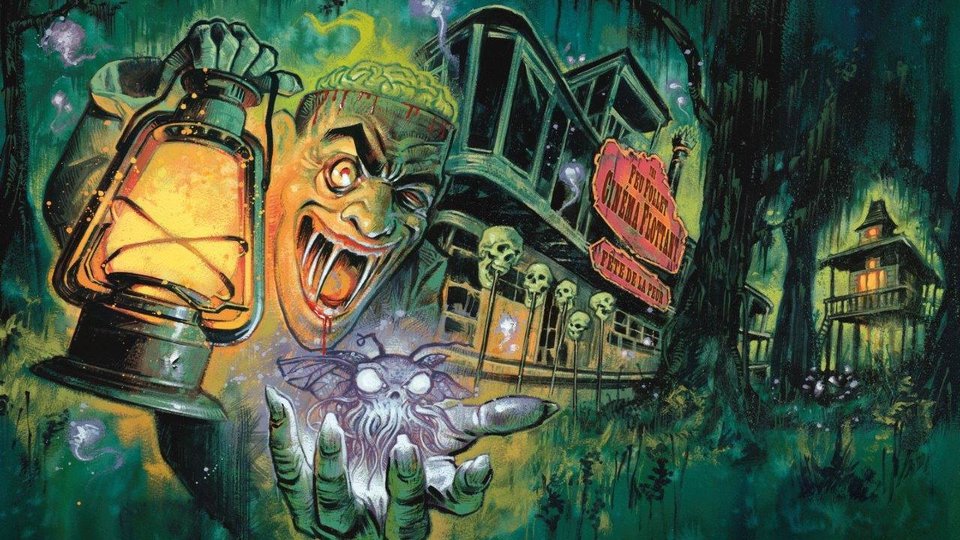 Horror Channel FrightFest is returning for 2016 and is now housed at the 12-screen Vue Cinema at Shepherd’s Bush, West London, from 25th-29th August 2016.

The relocation to Shepherd’s Bush was the inspiration behind the concept.

As Graham explains: “This year’s relocation suggested the idea of a floating cinema that can move through the city. Going west, I took it all the way to Louisiana, as portrayed in the film ‘Southern Comfort’. reimagining London as a swampland.

I took my cues from a variety of sources; the ‘feu follet’ (will-o’-the-wisp) are mentioned in George Washington Cable’s short story ‘Jean-ah Poquelin’, the paddle steamer was inspired by the work of Mark Twain and the skulls from the script of Orson Welles’ unmade ‘Heart Of Darkness’. There’s also a nod to Hertzog’s ‘Fitzcarraldo’. The witch house I added for extra Scooby-Doo points!”

The closing night film is a breakneck paced masterpiece – the UK Premiere of Train to Busan, so join ‘The Commuting Dead’ as director Sang-ho Yeon takes you on a first class horror action thrill-ride, mixing slaughter, suspense and splatter with incredible visual élan.

The scream of the crop from all over the globe are also assembled and strongly represented in their line-up of World Premieres – the incredible Italian supercar tension-ratcheting Monolith, the gory Dutch treat The Windmill Massacre, the stunning South African nightmare From a House on Willow Street, Tricia Lee’s creepy Canadian chiller Blood Hunters and three American shock absorbers Knucklebones, Enclosure and the Eurotrashy radical Blood Feast remake.

Five of the UK World Premieres make up the ‘First Blood’ strand, in which home-based directors are given a chance to shine with their debut efforts. These are: Phillip Escott’s harrowing Cruel Summer, Brad Watson’s urban gang shocker Hallow’s Eve, James Crow’s deadly House of Salem, Stewart Spark’s 666 Short Cuts To Hell entry The Creature Below and Lawrie Brewster’s PTSD-inspired The Unkindness of Ravens.

Plus, you can witness the stag party from hell in The Unravelling, the bad taste shenanigans of Night of Something Strange, , the viral thrills of The Evil In Us, the vehicular chills of Paranormal Drive, the die-hard dystopia of Here Alone, the eye-popping shocks of Found Footage 3D, and the ‘goriously’ insane Attack of the Lederhosen Zombies.

Ahead of its FrightFest Presents DVD release, there is an encore airing for Road Games, this time with a live interactive commentary with director Abner Pastoll and a London premiere for one of the most popular movies shown earlier this year at FrightFest Glasgow, Sean Byrne’s The Devil’s Candy.

The Duke Mitchell Film Club is back with the UK premiere of Kim Sang-Chan’s outrageously infectious Karaoke Crazies and a first showing of all three episodes of the mesmerising French TV mini-series Beyond the Walls.

Alan Jones, co-director of FrightFest, said: “For seventeen years now FrightFest has led the way through landmark changes in the genre, altered perceptions of fandom and embraced the revolutions in platforms and distribution models. It continues to do so this year with a breathtaking selection of genre attractions with the widest appeal and breadth of focus. We stand out because we stand for something special – a one-stop roadmap through everything you need to see to be totally up to speed with what the next year in horror fantasy will be all about”.

This year’s special events, retrospective programme, the guest list and the Short Film Showcase entries will be announced in the coming weeks.

Festival and day passes are on-sale now and are only available to buy online: http://www.frightfest.co.uk/tickets.html

Single tickets will go on sale on Sat 23rd July.