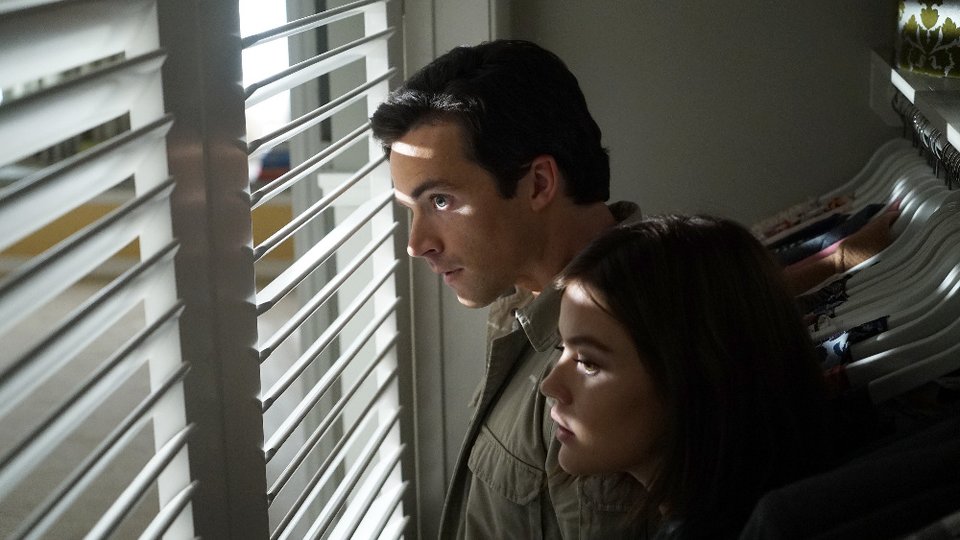 Pretty Little Liars kicked off its seventh season this week and Hanna (Ashley Benson) found herself in grave danger.

If you haven’t seen the latest episode of Pretty Little Liars and want to avoid spoilers we suggest you stop reading now. If you have seen it and want to relive all the action keep reading.

Don’t put dirt on my grave just yet

The episode opened with Spencer (Troian Bellisario), Emily (Shay Mitchell) and Aria (Lucy Hale) digging a grave in the woods saying it’s ‘what Hanna would have wanted’. Are we to believe that Hanna will be dead by the end of the season or is it the latest in a long line of PLL red herrings?

Following the shocking opening sequence the action rewound 4 days with the PLLs along with Mona (Janel Parrish), Caleb (Tyler Blackburn), Ezra (Ian Harding) and Toby (Keegan Allen) heading to the police station. As they arrived in the town square they saw Mary Drake (Andrea Parker) entering the police station and Toby volunteered to go and investigate. He spoke with her and confirmed that she was Alison’s sister and it turns out she’s the new owner of the Lost Woods Resort. She also took the opportunity to report a break in at her premises leaving everyone on edge.

Uber A contacted the group and insinuated that Hanna was in the bell tower of the church. As the bell chimed, the group rushed into the church to find Hanna’s lifeless body strung up. It turned out it wasn’t really Hanna but a doll made to look like her that told them they had 24 hours to find Charlotte’s real killer.

Caleb and Mona spent most of the episode staking Mary out and watching her as she unloaded bags into the hotel, and moved around lots of chemicals that could be used for a murder clean-up. Mona hacked into Mary’s phone so they could listen to her calls and she heard her talking to a guy with a British (or Australian) accent. She passed that news on to Spencer along with the location of the caller and Aria headed back to the bar she first hooked up with Ezra in but failed to find out who Mary was speaking to.

Mary also called by Spencer’s house and the two shared a tense cup of tea. Spencer tried to get information out of Mary but she didn’t get all that far. Mary didn’t stay long and warned Spencer to keep her doors locked before cryptically saying that no one was safe.

Spencer offered to use her home as HQ while the PLLs attempted to find Hanna and figure out who really killed Charlotte (Vanessa Ray). The majority of the group believed that Alison (Sasha Pieterse) was responsible and Aria suggested that the night of Charlotte’s death, it could have been Alison she and Ezra saw and not Charlotte. She described the clothes that Ali/Charlotte was wearing as a starter for 10 in finding out the truth.

Emily attempted to get to Alison to find out what she knew about Charlotte’s real killer but Elliott (Huw Collins) tried to block her explaining that Alison had experienced a psychotic break. Emily witnessed Ali lashing out at Elliott who was forced to sedate her to control her behaviour.

Meanwhile Aria and Ezra used Emily’s key to Ali’s house to snoop around and see what they could find. Ezra found a locked chest at the foot of the bed but they were interrupted when Elliott returned home. Hiding in the wardrobe they observed as Elliott opened the chest with a key hidden in a lamp shade and removed some dark clothing. We then saw him collect a box of tools that included a shiny, sharp saw. Ezra and Aria managed to escape out of the window but Elliott suspected someone had been in the house.

Emily finally managed to get some time with Ali and was shocked when her friend woke up and seemingly confessed to killing Charlotte. She kept the information secret from her friends and broke down to Sabrina (Lulu Brud) while at the Brew. Determined not to believe that Ali was responsible, Emily let herself into Ali’s house as Elliott slept on the couch. In Ali’s room she searched through some boxes and found the red coat that Ali was wearing the night Charlotte was killed seemingly confirming that Aria and Ezra did see Ali rather than Charlotte.

With the coat in her arms, Emily came clean to her friends and before they could formulate a plan Caleb took the coat, left it at the Lost Woods Resort and text Uber A saying that Alison was Charlotte’s real killer. The jacket was collected and it appears it was Elliott who wanted Charlotte’s killer as he went to the hospital, told Ali he knew she killed her sister and promised to keep her drugged and locked up as long as he could.

Hanna was seen alive and well, although scantily clad, and she was being held in some kind of barn. Every so often she was drenched with water and tortured by Uber A. During a dream she saw Spencer who gave her advice about finding a way out. When she woke up she managed to find a way out through an air vent and she ran through the woods. As she got to the road a car drove past and the driver was none other than Mary Drake.

Pretty Little Liars continues at 8/7c Tuesday on Freeform in the US and Wednesday on Netflix in the UK. Watch the promo for next episode Bedlam below: