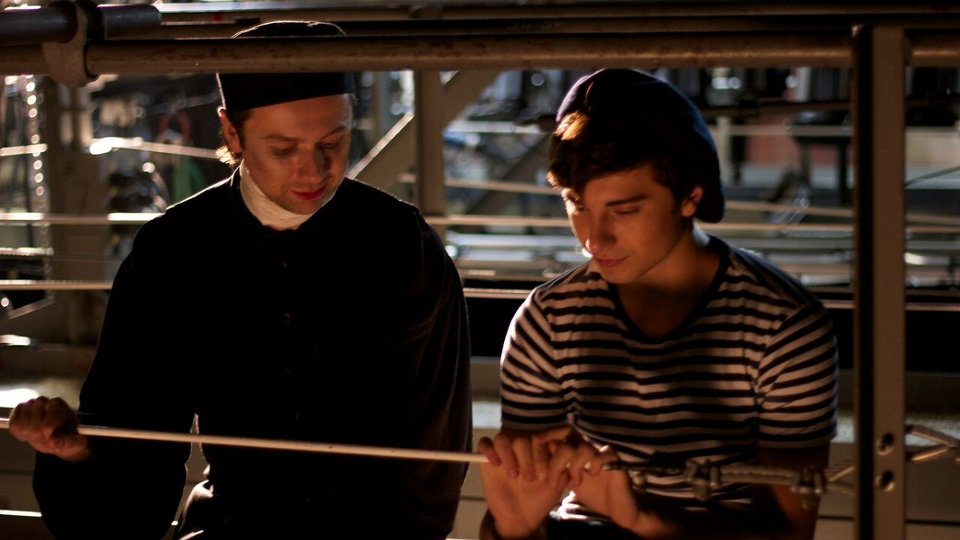 Maurice (Maxime Desmons) relocates to Canada to get away from his troubled past in Paris. Unwilling to get attached to anyone romantically, Maurice enjoys one night stands but finds that he isn’t able to find as many willing participants as he could in his native. An actor and a teacher, Maurice takes on 15-year-old Allan (Alex Ozerov) who wants to learn to speak better French. It soon transpires that Allan is struggling with his sexuality and his interest in his teacher may be more than just admiration. Maurice meanwhile embarks on a relationship with Michael (Jean-Michel Le Gal), the manager of the theatre company that has just cast him in a lead role.

What We Have is the feature film debut for Maxime Desmons as a screenwriter and director. Essentially the film is a ‘fish out of water’ tale with Maurice struggling to adapt to life in a small Canadian town. He’s keen to continue the lifestyle he was accustomed to in Paris but he soon finds out that isn’t going to be possible in his new home. When he starts working with Allan, he finds resistance from the boy’s grandmother who is uncomfortable having a gay man teaching her grandson. She worries that Maurice will ‘corrupt’ her grandson, completely unaware that Allan is already dealing with his sexuality behind closed doors.

Allan becomes increasingly more infatuated with Maurice, something that the teacher doesn’t particularly discourage, and Maurice becomes very protective of Allan when he finds out the boy is being bullied by his classmates. As their relationship intensifies and blossoms, Maurice enters into a push-pull romance with Michael. Initially it starts off as a one-night stand and Maurice is incredibly rude to Michael. Amazingly Michael continues to pursue him, determined to change his mind and continue their relationship.

The key to Maurice’s behaviour is linked to his past and as that slowly unravels throughout the film it becomes clear why he is the way he is. In many ways any relationship with Allan could never be more than pure fantasy on his part due to their age difference but he does nothing to discourage the youngster from falling deeper and deeper for him. It seems blindingly obvious to the viewer that Michael would be good for Maurice but he’s simply not all that interested in pursuing a proper adult relationship.

Maxime Desmons deserves a lot of credit for What We Have. Taking on the roles of lead actor, writer and director he had his work cut out for him but he’s crafted a tight and emotionally engaging movie. His performance as Maurice is the strongest in the movie and he creates great chemistry with both Ozerov and Le Gal. The material he’s come up with isn’t always the easiest to watch but it’s always compelling and you want to know where things are going next.

The only criticism I can really level at What We Have is that sometimes I felt it didn’t really go far enough. Maurice and Allan’s relationship in particular could have been explored in more depth or even gone a step further. Things tend to stop before they get too controversial and you’re never truly convinced that Maurice is actually going to reciprocate Allan’s feelings.

Aside from that criticism, What We Have is a compelling and emotionally engaging film fuelled by the work of Desmons. The characters are fleshed out, the plot takes enough satisfying turns to keep you hooked, and the third act doesn’t actually go where you think it might. What We Have is a little bit of a slow burn but it’s a deeply satisfying watch that could have pushed the envelope a little more in order to be truly great.

Advertisement. Scroll to continue reading.
In this article:Alex Ozerov, Jean-Michel Le Gal, Maxime Desmons, TLA Releasing, What We Have