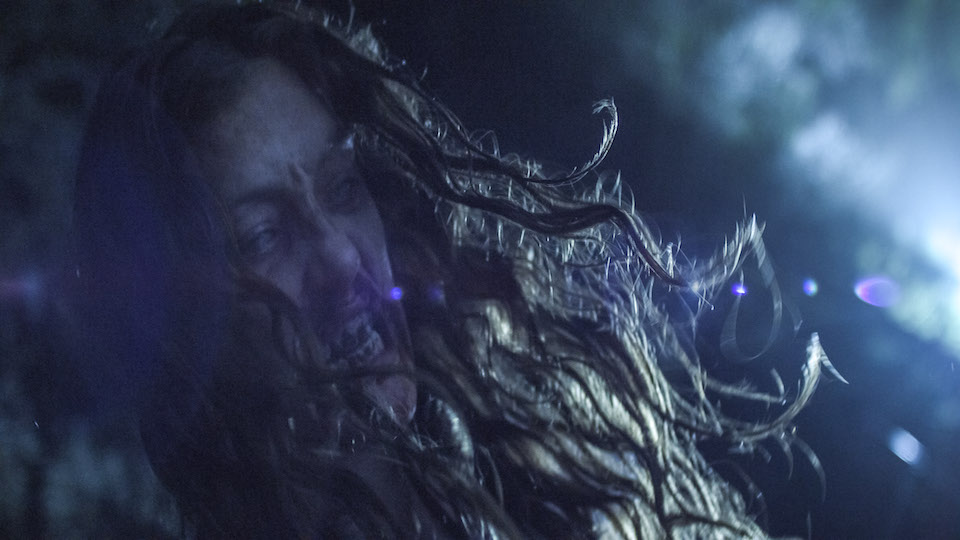 Genre mash-ups are a tricky proposition. Genre mash-ups with multiple plot strands are even trickier. Unfortunately, Dark Signal tries to pull off both of these, and whilst it should be applauded for its ambition, had it been a little more focused, this could have been quite special.

The two genres that have been thrown together are slasher and supernatural horror. The plots (plural) are as follows: Plot 1 – there is a serial killer on the loose, whose trademark is removing fingers with bolt cutters. Plot 2 – a couple drive out into the country with a bag full of tools, with the intention of extorting a footballer who owes them money. Plot 3 – at a radio station in North Wales, the resident night-time DJ is doing her last show before the station is taken over by a national corporation. Her final guest is a psychic who communicates with the dead.

These storylines all eventually come together, just not in a particularly satisfying way. The film is only 94 minutes long, but it gets buried in plot. Simplicity really is the key to effective horror. Jumping between the various strands simply serves to dissipate the tension. There is also some fairly injudicious use of the old horror cattleprod, which even though it made me jump across the other side of the room, it annoyed me for not earning the scare.

However, the film is not entirely without merit. Director Edward Evers-Swindell and cinematographer Adrian Brown succeed in making this one of the most stylish British horror films of recent times. It is filmed beautifully, and they make excellent use of the stunning rural locations. The director also executes some genuinely chilling moments. The scene in Marek’s bedroom froze my blood.

Joanna Ignaczewska is fantastic as single mum Kate. Her transformation from a terrified woman stranded in the woods, to a fierce warrior is one of the real joys of the film. The moment where her resolve hardens, and she tools up to go into battle seemed to be riffing on Ripley in Aliens. I don’t know if that was intended, but I loved it anyway. There is also a great twist, which I readily admit, did not see coming.

So yes, there are plenty of positive elements, and Evers-Swindells definitely marks himself out as one to watch. However, all the positive elements can’t ultimately overcome the muddled genre and over-abundance of plot.