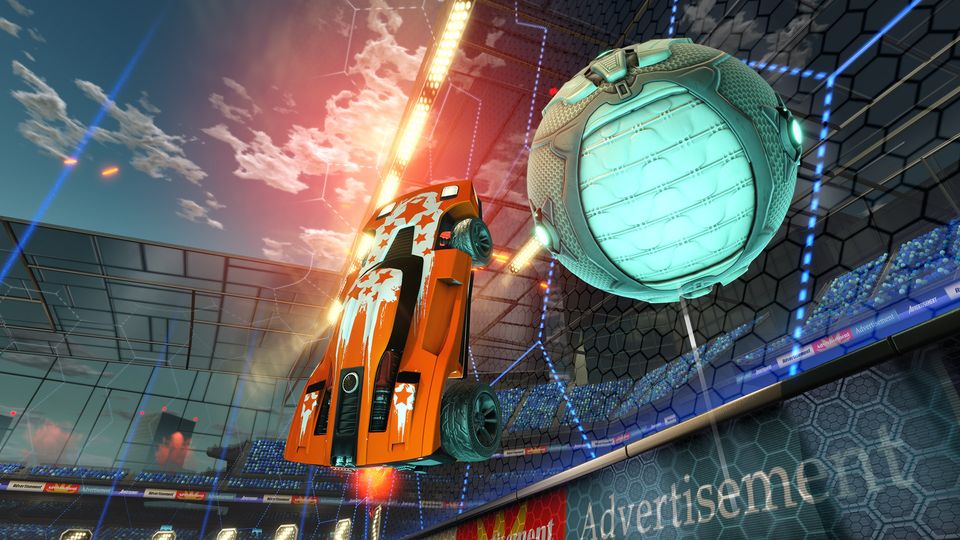 Rocket League has been available on PC and PS4 since the middle of 2015. Since then the game has gained a huge following and Xbox gamers have been jealously wondering if the game would come to their system. This month the wait is finally over as Rocket League has landed on Xbox One.

I wasn’t all that interested in the game when I first heard about it last year. It was described to me as football with cars and I’m not really much of a fan of either. However like many people I ended up with a free copy of the game as it was included as part of PS Plus. I eventually downloaded it, gave it a try and haven’t stopped playing it since.

On Xbox One the game remains the same. Teams of player or bot-controlled cars compete to knock an oversized ball into the opposing teams goal. Each arena is setup like a football pitch inside a large cage with a goal at each end. The ball spawns in the middle of the arena and then players are free to go about crashing into the ball in order to score a goal.

Each player is in control of a rocket-powered car capable of reaching incredible speed, climbing the cage walls and even taking flight for a short period. To use your rockets you need to collect orbs from around the arena, some give a small amount of rocket fuel while special ones will completely replenish it. Cars also feature a double jump and can flip back, forward and sideways. Boosting into an opponent can also demolish them.

The controls are as close to perfect as you can get. They are simple enough that anyone can pick up and play but also complex enough that they take a long time to master. Only the players who have put the hours in are the ones that you’ll see pulling off some of the more spectacular aerial antics. As it’s possible to score a goal in a matter of seconds it’s quite possible for the lead to shift quickly.

One aspect of the game that players need to master is the camera. By default you view the action from a third-person chase cam. This follows your car and is good for getting around and smashing into other players but tough for following the ball. In this view you get a little arrow by your car showing you which direction the ball is in. Pressing Y changes to a camera that follows the ball. Driving in this view is more tricky but with practice I’ve found myself preferring to play this way.

The game supports 4-player splitscreen or 8-player online. Offline you can play exhibition matches from 1v1 to 4v4 and even choose for unfair team numbers. There’s also a complete offline season mode and comprehensive tutorial and training drills.

The game is easily at its most fun when played online and supports both ranked and unranked play. Unranked is where you should start when you first venture online and you should expect absolute mayhem. When playing with a group of newer players you can expect to see everyone chasing the ball in a pack. Those that get close enough tend to get a bit excited and just smash into the ball at full boost.

After practice the best games to be found are those in ranked play. I’m addicted to the 1v1 ranked playlist but the others are also good. 3v3 is the recommended mode and allows teams who work together to pull off some impressive tactics. 2v2 works best with players taking it in turns to attack and defend while 4v4 tends to be a bit too chaotic.

Xbox One gamers have been rewarded for their patience as the game comes bundled with the first three DLC expansions. This means you’re getting a much larger variety of arenas, cars and items with the base game. There’s also a variety of Xbox themed content included with the game including items based on Xbox exclusive games. There’s also two new cars based on Halo’s Warthog and the Armadillo APC from Gears of War. These all require hours and hours of play to unlock.

The Xbox One edition also has the optional Back to the Future car pack available as premium DLC. I’d imagine that the developers will be putting out plenty more DLC this year and would expect to see more Xbox One exclusives too.

On Xbox One the framerate currently seems a little less stable than on PS4 and the graphics also feel a little less crisp. On the whole the game plays just as well as the other versions but I have noticed a bit too much lag in some online games. I expect the servers are getting hit hard at the moment and that the developers will be working to reduce this as much as possible.

It’s wonderful to see Rocket League finally make the jump to Xbox One. There’s endless hours of fun to be had with the game and it should appeal to both casual and hardcore players. It’s one of those games that is hard to put down once you start playing and can easily eat up hours of your free time. Highly recommended.

Watch the Rocket League Xbox One launch trailer below: