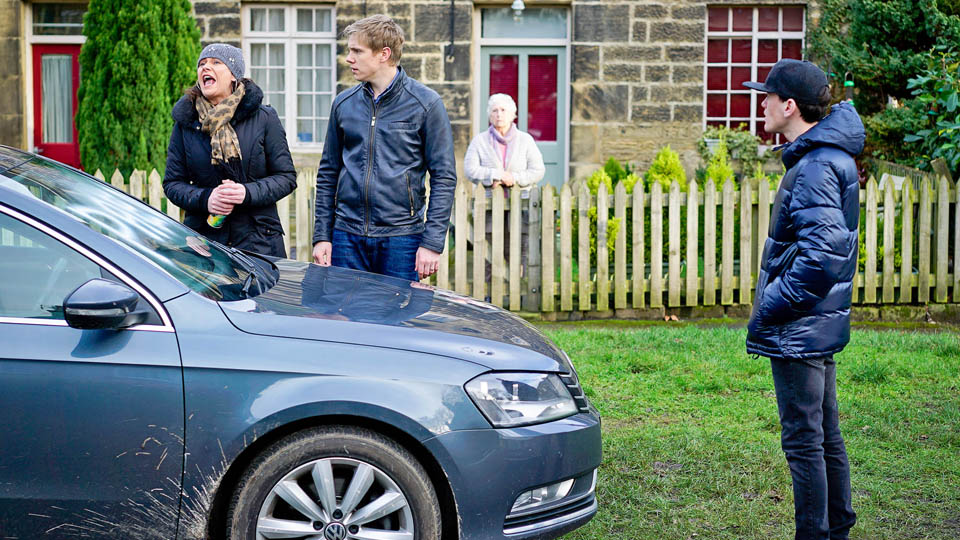 Welcome to our weekly look at what’s going to happen in the sleepy Yorkshire village of Emmerdale.

An unlikely alliance develops between Chas and Robert, Paddy thinks Rakesh is covering for Kirin and there’s a new face you might recognize when Britain’s Got Talent winner George Sampson puts in a brief acting stint on the show.

Feeling like she’s not getting any help, Chas heads to Gordon’s place and angrily bangs on his front door, armed with spray paint.  She causes a scene as she shouts at him to come out before she tells the neighbourhood just the kind of man he is.  Robert arrives as she’s spraying a message on Gordon’s car and tries to talk her down, explaining they need to be smarter if they want to take him down.

Later, the police arrive at The Woolpack and end up letting Chas off with a warning over the vandalism to Gordon’s car.  Aaron arrives back in the midst of things and feels completely betrayed that his mother has exposed the story to everyone.  He demands that she tell everyone that it didn’t happen.  Robert tries to convince Aaron that everyone knowing is a good thing, but Aaron believes his only hope is in finding his step-mother, Sandra.  Robert makes a mysterious call and soon he’s managed to locate her.

He forces Aaron to let him go along when he goes to visit Sandra and Aaron is secretly relieved to have the support.  As they pull up to Sandra’s house, it’s clear that Aaron doesn’t know how to proceed, so Robert suggests they go to the nearby pub for a drink to steady the nerves.  As the pair are engaged in a serious chat, they are interrupted by a teenage girl asking for her bus fare home.  Later, near Sandra’s house, the same girl snatches Aaron’s wallet leaving Robert to tackle her.  When they get to Sandra’s house they realise the girl is in fact Aaron’s sister, Liv.

Aaron is left fuming and pins Sandra up against a wall when she tells him she can’t stand up for him in court.  Did she know what Gordon was up to all those years ago and has Aaron blown any chance of talking her into helping him?

Back in the village, the police tell Chas that Sandra is denying any knowledge of Gordon raping Aaron which leads her and Cain to think it might be best if Aaron dropped the case, rather than put himself through a court case with minimal evidence.  But just as Aaron is about to tell the police he wants to drop it, a new victim comes forward.  Could it be Liv?

Paddy is adamant that Kirin must have killed Tess

Rakesh receives a letter in the post from Kirin and Priya is conflicted as she helps him destroy it.  Rakesh is panicked when Ross starts looking for Kirin and threatens he might tell the police what he knows.

When PC Swirling arrives and tells Rakesh they’ve found Kirin’s car, Priya is uncomfortable at how easily Rakesh can lie to them.  It seems the police aren’t finished with him yet, as later in the week, they return to talk to him after being tipped off that he has had a letter from Kirin.  It seems word is spreading fast and it’s not long before Rakesh has been suspended from work.

Meanwhile, Rhona is furious with Paddy and tells him she’s glad that Tess is dead.  Paddy is shocked and tells Rhona that he had no other option and that they need to start talking to each other if they are to survive as a couple.  Later, Paddy overhears Rakesh being questioned in the pub and tells Vanessa that he thinks Kirin’s disappearance proves he killed Tess.  Rhona tells him to leave it, but he brings it up with her again when they are on their own and says he thinks Vanessa and Rakesh are both covering for him.  He wants to phone the police but Rhona forbids him.

Rhona tells Paddy she’s ready to talk, but is sickened by the story of Tess and Paddy’s affair and she loses her temper in front of Leo.  She still insists she wants them to carry on as normal and proceed with the adoption, but Paddy isn’t convinced it will work and later Pearl catches the pair having a blazing row.  Pearl worries that Rhona might be back on the painkillers.  How long can they hide Paddy’s secret from everyone?

Kerry gets an idea when Hot Tony comes to help her out and it leaves Chrissie suspicious when she sees Bernice flirting with him.  When Tony invites Bernice for a drink, she politely declines and throws the business card he gives her in the bin for Chrissie’s sake.  When Chrissie later finds it in Bernice’s handbag she plots her own plan;  she offers Andy a job at Home Farm.

Chrissie is keen to put her plan into motion and gets Lachlan to help set up webcams to catch Bernice cheating.  Andy is the bait for her trap and is thrown when Bernice fills him in on why she thinks he’s been hired.  Chrissie watches back the webcam footage but is surprised by her reaction.

Charity calls Rakesh from prison and wants him to get all her money out of Home James, but he decides to let Jimmy in on the request and they hatch a plan to play her at her own game.

Gaby confides in Jacob about stealing Val’s ring and he tells David who is fuming.  Ashley doesn’t know what to do about Gaby’s recent bad behavior, could Lawrence hold the answer?

Zak and Cain build bridges as the latter struggles to know how to help Aaron and his situation.

Leyla is moping after being dumped by Nikhil and Brenda is distraught that she’s once again lost Molly.

Rishi asks Priya to take charge at the factory and Jai is shocked when she asks him to be her No.2.

Emmerdale weeknights at 7pm on ITV1 (7pm & 8pm on Thursday).