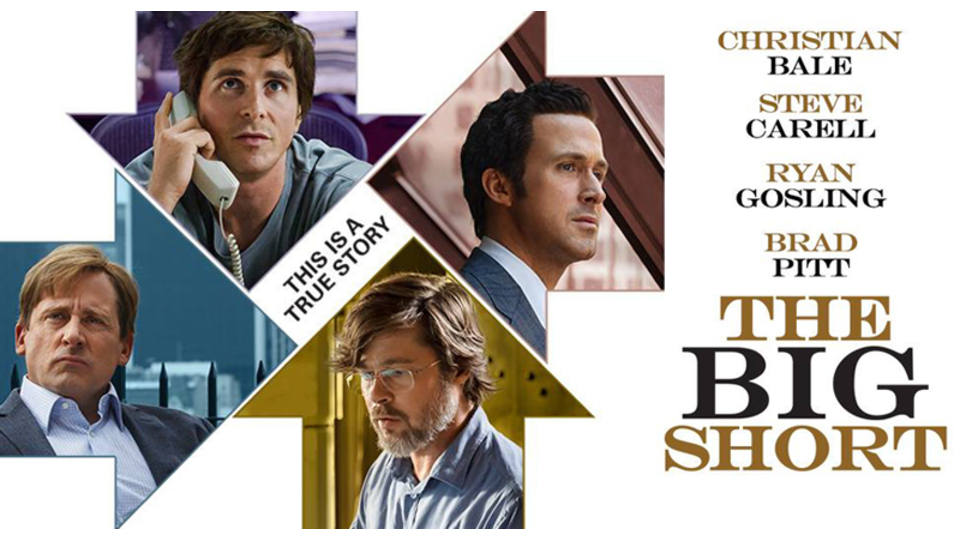 Michael Burry (Christian Bale), Jared Vennett (Ryan Gosling), Mark Baum (Steve Carell) & Ben Rickert (Brad Pitt) along with former colleagues Jamie Shipley (Finn Wittrock) and Charlie Geller (John Magaro) all work independently of one another in the world of high-finance. Predicting the credit and housing bubble collapse of the mid-2000s, they all decide to take the biggest gamble of their lives by challenging the big banks and financial institutions for their greed and ingrained corruption.

The Big Short is a simply unmissable movie. It manages to couple intelligent filmmaking with mass-market appeal to tell its relevant, disturbing and hugely important story to as wide an audience as possible. Resisting the need to dumb down its message, The Big Short is the most coherent and engaging explanation of the financial crisis seen so far, with a keen eye for the truth and an unwavering desire to educate whilst being entertaining.

The casual viewer will most likely be first drawn to the magnificent cast list assembled here. The Big Short is certainly not short on star power with its four principal leads doing an exceptional job in bringing this remarkable story to the big screen.

Christian Bale continues to impress and hands in a performance of remarkable verve and nuance as Michael Burry, which has rightly gained him awards season recognition. Ryan Gosling is quite perfectly cast as flash businessman Jared Vennett. He manages to keep his slick behaviour just this side of charismatic thanks largely to Gosling’s energetic grasp of the source material.

Brad Pitt delivers a subtle but fascinating turn as Ben Rickert and works off a great dynamic with John Magaro and Finn Wittrock as young entrepreneurs Charlie Geller and Jamie Shipley. But it’s Steve Carell who really deserves special praise for his portrayal of Mark Baum. Serving as the films most relatable moral compass, Carell shines with a career-best performance. There’s also some amazing support on show with Rafe Spall, Marisa Tomei, Hamish Linklater and Jeremy Strong all contributing to this bankable ensemble.

Charles Randolph and Adam McKay’s screenplay is based on Michael Lewis’ book, and deserves so much praise for its constant inventiveness. Dealing with dense jargon, buzz words, acronyms and deliberately deceptive financial speak; the script effortlessly breaks down the heavy aspects of its subject matter in a relatable and engaging way. Daring to be different and with a fearless streak running strongly throughout, the film smashes the fourth wall with spectacular results. Getting celebrities to convey certain plot points was also an unexpected masterstroke. This allowed Adam McKay’s direction to really shine through. His ability to compile this heady mix into a completely captivating and even humorous film deserves huge praise.

The Big Short deserves all of its plaudits because it’s a perfect marriage of style and substance – something that takes a socially relevant issue and beautifully presents it onto a plate. If you can’t get excited about such a difficult subject matter being handled in such an engrossing way, then you might as well give up on cinema. The Big Short is sensational filmmaking of the highest order with a magnificent cast and a keen voice for its audience. The Big Short is already in the conversation as one of the best films of the year.