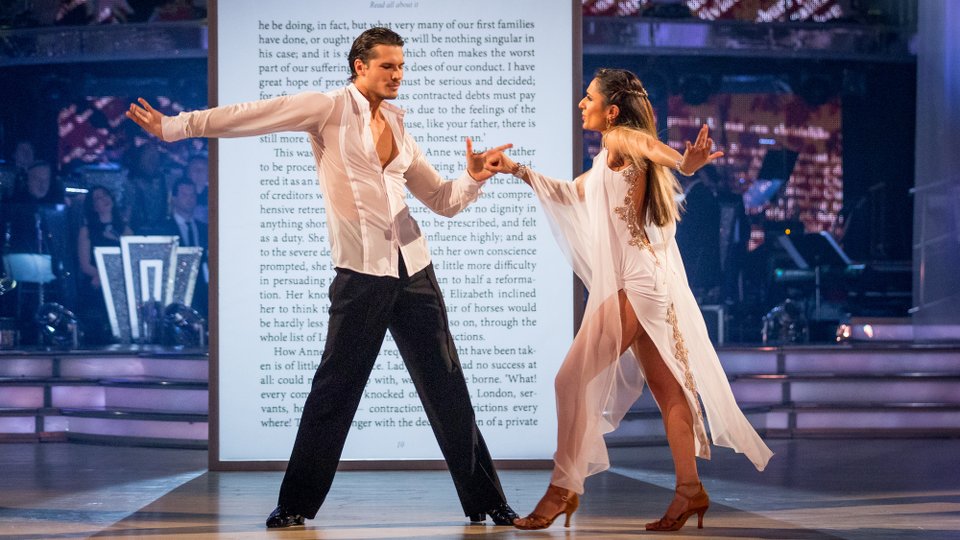 Strictly Come Dancing 2015 continued last night with the final 7 couples dancing not once but twice.

As well as performing their own routines, the couples also took part in a Quickstepathon to earn additional points. The leaderboard once again was quite different with Helen George and Aljaz Skorjanec at the top and Peter Andre and Janette Manrara at the bottom.

We’ve reviewed all of the performances from last night and picked out favourites. Keep reading to find out who made the cut.

We keep crossing our fingers and hoping that Jay will have a return to form but we fear that the Jive was his peak. Last night’s performance was confident and assured but once again he lacked the emotion and connection with Aliona.

We really enjoyed Helen’s routine but we’re going to be honest and say we don’t quite understand all of the fuss the judges made about it. She did a superb job but was she so much better than all the other couples? We didn’t think so.

If there’s one couple that’s underrated this series it’s Kellie and Kevin. They are consistent each week in terms of the level of performance they give but the judges seem to always put them in the middle of the leaderboard. We loved their opening Salsa and think it deserved more points.

Georgia was on fire last night for her Paso Doble and she showed yet another side to her abilities as a dancer. It wasn’t the best performance she’s given yet but it was cool, confident and her chemistry with Giovanni was off the scale.

What on earth was Len on about? We know he doesn’t like contemporary dances but Gleb choreographed a beautiful Rumba for Anita, which she danced amazingly. This deserved to be the dance of the night and Len should have marked the dancing and put aside his personal preference.

Strictly Come Dancing 2015 continues tonight at 7.20pm on BBC One as another couple leaves the competition.