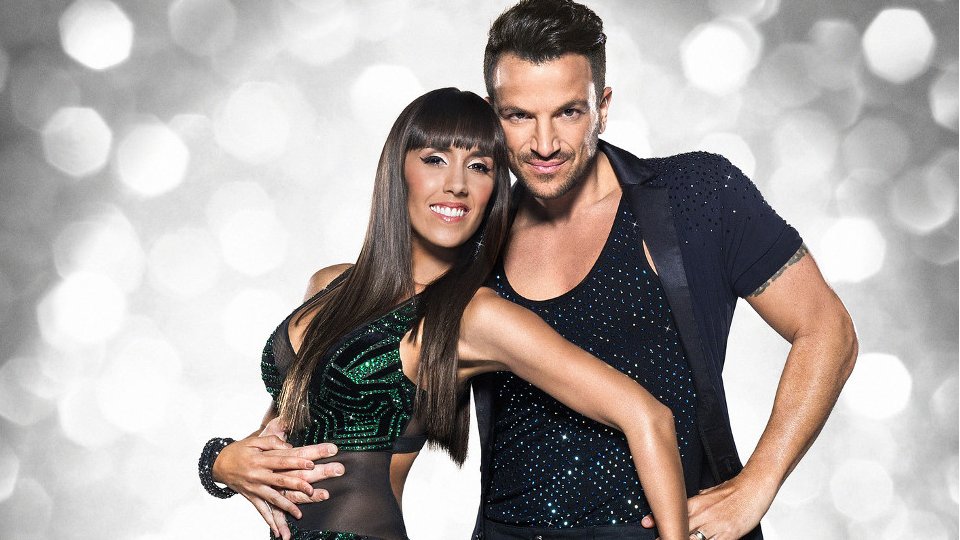 With only 10 couples left in the competition, Strictly Come Dancing 2015 is getting tougher and tougher.

Last weekend sports presenter Kirsty Gallacher and her partner Brendan Cole left the competition after losing the dance-off to Jamelia and her partner Tristan MacManus. The show’s Halloween Special delivered on spectacle and it saw Georgia May Foote and her partner Giovanni Pernice top the leaderboard for the first time.

Tonight the couples danced once again to secure their place in the competition. Tess Daly and Claudia Winkleman led the proceedings with Craig Revel-Horwood, Darcey Bussell, Len Goodman and Bruno Tonioli offering their critique.

Peter Andre got a lot of criticism from the judges last week when he was criticised for doing the same thing every week. The singer took on the criticism and shared his determination to wow the judges with his vaudeville themed Charleston. Did Peter and his partner Janette Manrara get the judges back on side?

The dance: There were some definite timing issues during the routine but for the most part Peter pulled it off. He threw himself into the routine and his energy was so infectious.

The comments: Len said ‘first class’ and told Peter it was his best dance yet. Bruno said it ‘was just what the doctor ordered’ and told him it was what he wanted to see. Craig told Peter that the performance was ‘exceptional’. Darcey said it was ‘excellent’ and told Peter she could mistake him for a professional.

Poor Jamelia! She’s been in the bottom two now three times and last week it seemed to knock her confidence. This week Jamelia was back in Ballroom mode with a Viennese Waltz. During the week Jamelia trained really heard with her partner Tristan MacManus. Did it pay off on the night?

The dance: Jamelia floated around that ballroom like a princess tonight. It was one of her best efforts yet but we’re not sure it’ll keep her out of the bottom two.

Weather presenter Carol Kirkwood was very lucky not to end up in the dance-off last week after a terrible Rumba. Clearly she’s a popular lady with the viewers but we think she really needs to up her game. During training Carol admitted she was scared of lifts but she worked to overcome them. Did Carol and her partner Pasha Kovalev deliver with their American Smooth tonight?

The dance: Erm we don’t really know what to say about that Carol. The routine was OK but she’s not upping her game at all. She’s way below the standard of the other contestants and it’s surely her time to go.

The comments: Craig said watching Carol was like watching a bumper car ride but told her it was a vast improvement over last weekend. Darcey said that she could see Carol’s confidence and intent but told her she needs to hold her focus. Len told Carol she needs to work on her footwork. Bruno said that Carol is consistent when it comes to not being able to dance.

Call the Midwife star Helen George had a very good week last week with her Mummy-themed routine. During the week Helen caught up with some friends and her partner Aljaz Skorjanec came along to teach them how to dance. Could Helen convince with a Rumba during tonight’s show?

The dance: That was one sexy Rumba! We’re not sure the singer had the vocal chops to tackle an Adele song but that aside Helen was pretty sensational tonight. Aljaz having his shirt open didn’t hurt either.

The comments: Darcey said she was transported into the love story of the routine. Len wasn’t happy and told Helen that it lacked enough basic Rumba. Bruno called Helen a ‘siren’ and told her that she entrapped him. Craig said that he loved the drama of the routine and disagreed with Len.

The Wanted star Jay McGuiness had the honour of doing the first Argentine Tango of the series tonight. After last week’s success, the pressure was on for Jay to get back to the form of his amazing Jive. During the week Aliona Vilani invited some experts to help Jay get into the routine. Did Jay soar to the top of the leaderboard tonight?

The dance: It was a strong performance but for us there was something lacking during that performance. We can’t quite put our finger on it but there was a bit of punch missing.

The comments: Len said it was a ‘polished’ performance but told Jay to let emotion come out from his face. Bruno said he could feel the routine and told Jay his lines were ‘picture perfect’. Craig agreed with Len that Jay needs to bring the acting forward and upset Bruno with his critique. Darcey said that Jay executes his moves to perfection but agreed with the judges that needs to bring the emotion out.

Katie Derham got a lot of criticism from the judges last weekend leaving her a bit deflated. She admitted that she knew it wasn’t a perfect performance but revealed that the judges had burst her bubble slightly. Tonight Katie and her partner Anton du Beke danced the Quickstep. Did she manage to impress?

The dance: That was definitely a lot better than last week. Katie is very inconsistent

Anita Rani really wowed with her magical performance last week. She’s still our dark horse and we think she could win the show. Tonight Anita and her partner Gleb Savechenko danced the Jive. Did they keep up the high performance level?

The dance: That was a fun and energetic Jive. Anita really impresses with her energy and stamina. As for that moment when Gleb jumped and Anita clung to his legs as she dropped to the floor – WOW!

Last week’s Harry Potter-themed Paso Doble received a mixed reaction from the judges but we loved it! Kellie Bright and her partner Kevin Clifton were taking things down a notch this week with a Waltz. During the week Kevin took Kellie to a tea dance to get her into the spirit. Did she win over the judges tonight?

The dance: Another beautiful routine from Kellie and Kevin tonight. We’re starting to think that Kellie could win the series this year. Stunning work!

The comments: Darcey said that Kellie has a strong core but criticised her right shoulder movements. Len said it was ‘full of charm, full of grace’ and told Kellie that she knew how to please him. Bruno said that Kellie gets tight sometimes but told her the performance was great. Craig said it was a lovely routine.

Jeremy Vine got his highest score from Craig last week for his Halloween Michael Jackson-themed routine. This week Jeremy and his partner Karen Clifton spent some time in his radio studio as they prepared for their Tango. Could Jeremy get an even higher score from Craig tonight?

The dance: Jeremy tried SO hard tonight and we could see that but it wasn’t his best performance. He struggled to keep up with Karen and his leg kicks were a bit limp. At least it was a fun routine!

The comments: Len said there’s always an anticipation when Jeremy dances calling the performance ‘wild, wacky and fun’. Bruno said ‘that’s how the West was lost’ and was booed by the audience. Craig said that dancing for Jeremy was like playing the lottery. Darcey said that Jeremy’s determination was fantastic and commended him for keeping a straight face.

Georgia May Foote leapt to the top of the leaderboard last week with her Ghostbusters themed Tango. Hoping to keep the momentum up, Georgia and her partner Giovanni Pernice were dancing a Samba tonight. During the week Georgia took Giovanni on a tour around Manchester. Did Georgia stay on top this week?

The dance: It’s such a shame that there was such a visible mistake in the middle of that routine. Until that point Georgia as doing fantastic but that is sure to affect her score tonight.

Tune in to the Strictly Come Dancing 2015 results show tomorrow night at 7.15pm on BBC One. See all of the couples in rehearsals from earlier today in our gallery below:

Advertisement. Scroll to continue reading.
In this article:SCD