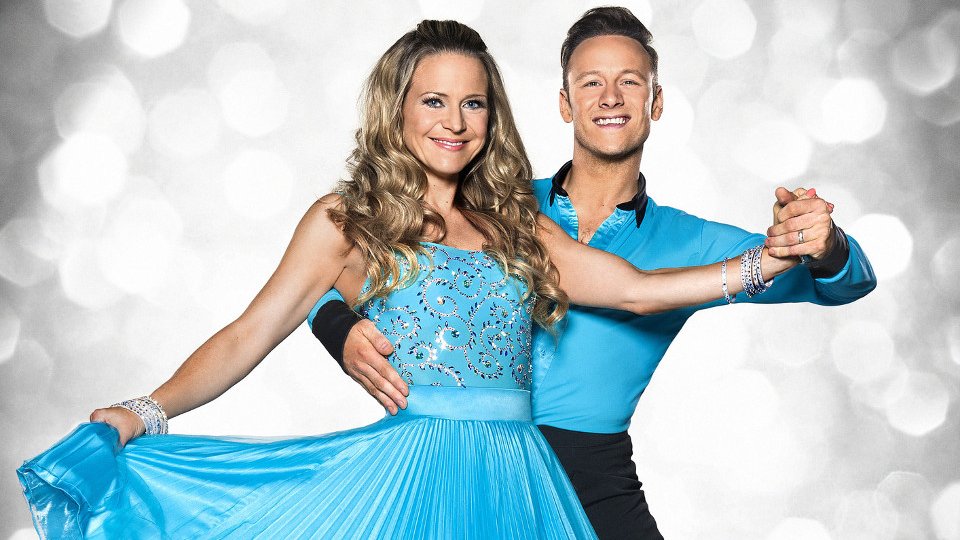 Strictly Come Dancing 2015 continued tonight as the 12 remaining couples danced again for the judges and the public vote.

After waving goodbye to entertainer Daniel O’Donnell and his partner Kristina Rihanoff last week, the couples got down to business this week as they fought to secure their place in next week’s Halloween special. Last week’s show saw the leaderboard get a much needed shake-up as Katie Derham and Anton du Beke topped the leaderboard.

Tess Daly and Claudia Winkleman kept the energy level up for the night with their usual banter while judges Craig Revel-Horwood, Darcey Bussell, Len Goodman and Bruno Tonioli offered their critiques.

How did everyone get on tonight? Keep reading our recap to find out…

Georgia May Foote and Giovanni Pernice

Georgia May Foote finally got comments that matched her performance last week after wowing the judges with her Quickstep. During training Georgia struggled with the Salsa and her family surprised her by turning up unannounced during rehearsals. Did Georgia get to grips with the Salsa and do her partner Giovanni Pernice proud?

The dance: What a fun opening to the show with some really daring lifts! We think there was a little mishap in the middle there with Giovanni reaching out to Georgia while she was twirling away. It didn’t bother us though!

The comments: Len said it was ‘a great show starter’ and ‘show stopper’. Bruno called Georgia a ‘gorgeous little strumpet’ and told her it was good to see how so ‘alive’ and ‘participating’. Craig said that Georgia’s legs were uncontrolled in parts and criticised her preparation for the lifts. Darcey said that she wanted to join in and told Georgia that she had the ability to go far in the competition.

Weather presenter Carol Kirkwood had a good week last week after being told by the judges that she was improving. This week Carol and her partner Pasha Kovalev were dancing the Viennese Waltz and Carol struggled with the spins during rehearsal. Pasha took her to an amusement park to help her overcome her dizziness. Did Pasha’s plan pay off?

The dance: That was a really lovely routine from Carol and Pasha. Carol did look like she was turning green a little bit during those spins and there were a couple of mistakes but it was pretty good!

The comments: Bruno said that he could see that a lot of content was in the dance but told Carol she needed to put life into the performance. Craig said that Bruno was being nasty and told Carol that he could see that she was trying. Darcey said that Pasha gave Carol a lot to think about and commended her for not making mistakes (we’re sure we saw a few!). Len pointed out that Carol had no prior dance training and said she gave him what he expected ‘a nice stylish Viennese Waltz’.

Anita Rani continued her winning streak last week with her Samba. There were a few mistakes but she and her partner Gleb Savechenko were awarded a high score. During training Anita’s mum visited to give her a confidence boost. Tonight Anita and Gleb danced the Tango.

The dance: Like Kirsty last week, Anita had a really odd song for the style she was dancing. The performance was powerful and contemporary though and we think she did really well.

The comments: Craig said that he loved the choreography in the routine and told Anita he ‘loved’ the performance. Darcey said it had an unusual contemporary feel and told Anita that she’s impressed with her focus. Len said that Anita ‘gave it some welly’ and told her he liked the darkness of it. Bruno called Anita ‘the Queen of Klingons’ and told her she played it perfectly.

Peter Andre got fantastic comments from the judges last week and they told him he was back on form. This week Peter was dancing the Rumba with his partner Janette Manrara. During the week Janette took Peter for a photoshoot to get him into the spirit of the Rumba so that she could help him fix his posture and movements. Did it help him get it right on the night?

The dance: That was a confident and cool Rumba. It wasn’t as passionate as we would have liked but it was beautifully shaped and framed. It wasn’t his best dance but we enjoyed it.

The comments: Darcey said that Peter cared for Janette throughout the performance and told him he had a lot more to give. Len said that it made him smile and told Peter he ‘pitched it pretty damn good’. Bruno said that he loved Peter’s commitment to the character but told him that he tends to be clipped. Craig said that it lacked pressure and resistance through the floor but told Peter that he loved the way he presented Janette through the performance.

Kirsty Gallacher wasn’t happy with her Paso Doble last week and she found herself in the bottom two with her partner Brendan Cole. Tonight Kirsty and Brendan were dancing the Viennese Waltz and Brendan admitted that Kirsty isn’t a soft dancer, which is what the routine needs. Brendan remained confident that Kirsty could do it. Was he right?

The dance: There were a few times there we thought Kirsty might actually be glued to Brendan. Overall she gave a rather elegant and beautiful performance though. Dare we say it was her best dance yet?

TV chef Ainsley Harriott has had a rollercoaster ride so far on Strictly but last week he turned a corner with his Waltz. Whilst he’s not the best dancer in the competition, there’s no faulting Ainsley’s commitment and we love his partnership with Natalie Lowe. Tonight Ainsley and Natalie danced the Jive but did their winning run continue?

The dance: Such an entertaining routine. Ainsley has so much energy that it can make his movement look a bit gangly. It was good fun but we’re not sure the judges will love it.

The comments: Bruno said that there was so much shaking the performance almost curdled. Craig said that the performance needed to be more technical at this stage in the competition. Darcey said that Ainsley is there to entertain everyone and admitted that he does that. Len said it was a mix of ‘shake, rattle and roll’ and ‘shake’n’vac’ but told Ainsley it was fun and entertaining.

Jamelia had a breakthrough last week with her Charleston. She got her highest score yet and fantastic comments from the judges. This week Jamelia and her partner Tristan MacManus were dancing the Foxtrot and Tristan admitted that Jamelia struggled with confidence when it came to the Ballroom routines. During the week Jamelia’s daughters visited her to give her a boost. Did she pull off another show stopper?

The dance: We think Jamelia has found her way in this competition. That was her best Ballroom effort to date and Jamelia seems to have grown in confidence.

The comments: Craig said that it started well but the end went ‘horribly wrong’. Darcey said that it had a beautiful feel and told Jamelia she could see she’d been working hard. Len said that Jamelia is more comfortable with the Latin and told her it was a mental block when it came to Ballroom. Bruno said it was like ‘a nice cup of Horlicks’ and told Jamelia to cover up her mistakes better.

The dance: Latin isn’t Katie’s strongest style but she did have a lot of fun there. It was a very entertaining routine but it’s not on par with last week’s performance.

The comments: Darcey said that it was fun and fast but messy in places. Len said the performance was good but told Katie she needs to shake her assets more. Bruno said that Katie was throwing herself around like a kitten but told her she lost her timing. Craig said that Katie’s armography was ‘sticky’ in places and told her that she didn’t get the basics before calling it ‘dreadful’.

Jeremy Vine didn’t have a great week last week with his Jive but he managed to sail through to this week on the public vote. This week Jeremy was dancing the Waltz with his partner Karen Clifton. During the week Elvis Costello sent Jeremy a good luck message after hearing that he was dancing to one of his songs. Did Jeremy and Karen do better than last week?

The dance: We really rather liked that performance. You could see that Jeremy was enjoying himself and Karen’s choreography was absolutely stunning. That’s his best performance to date!

The comments: Len said that he smiled throughout the performance and told Jeremy he loved the effort he put into it. Bruno said that Jeremy’s Waltz didn’t work and told him he had a zombiefied grin on his face. Craig said it was ‘shapeless, ploddy’ and full of gapping. Darcey said that Jeremy’s smile was charming but told him to work on softening his knees.

Call The Midwife actress Helen George admitted that she enjoyed her routine more than she expected last week. During training for this weekend Helen’s partner Aljaz Skorjanec put her through her paces with a hurdle game. Tonight Helen and Aljaz danced the Quickstep.

The dance: Helen clearly had a lot of fun with that routine. It was a little messy towards the end but her energy was infectious. She’s in no danger of going home this weekend that’s for sure.

The Wanted star Jay McGuiness had a bad week last week. His Quickstep was a mess and his score was pretty low compared to his incredible score for his Jive the week prior. During the week Jay met up with his former bandmate Nathan Sykes for a confidence boost. Tonight Jay and Aliona danced the Paso Doble. Did Jay get back on top?

The dance: Jay’s back in the competition! That Paso was a huge improvement on last week’s disappointing Quickstep. He really owned that ballroom throughout that routine!

The comments: Craig said that Jay could have had a bit more menace but told him it was a great dance. Darcey said that Jay held the strength in his body throughout the routine and complimented his arms as the best she’s seen for a male celeb. Len said that Jay has gone from ‘strength-to-strength’. Bruno called Jay the ‘bull’s bollocks’.

Last week Kellie Bright had a strong week and she admitted that she’d discovered a love of Ballroom she never knew she’d had. This week Kellie and her partner Kevin Clifton had a big job on their hands as they were dancing the Jive, and Jay has already set the bar very high for that dance. Did Kellie and Kevin manage to out-do Jay and Aliona?

The dance: Kellie definitely kept up with Kevin during that routine and she wasn’t kidding when she warned that it was FAST! That was a great way to close the show and one of the best dances Kellie and Kevin have done yet.

The comments: Darcey said that Kellie delivered all of the goods and told her it was ‘outstanding’. Len said he wanted to see the routine again. Bruno shouted ‘attack, attack and victory!’. Craig said it was clean and sharp and ‘brilliant’.

The leaderboard for the evening is:

Strictly Come Dancing 2015 continues tomorrow night at 7.15pm. Check out all the action from today’s dress rehearsal in our gallery below: