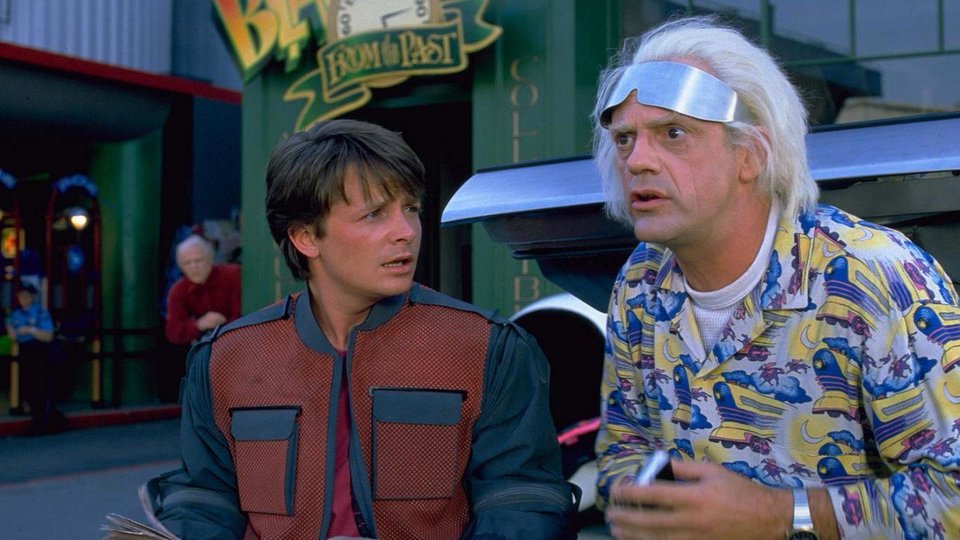 In Back to the Future Part II, Marty McFly and Doc Brown travel thirty years into the future to arrive in Hill Valley on October 21, 2015. To commemorate that date, as well as the 30th anniversary of the release of the original Back to the Future in 1985, Titan Books announces the release of Back to the Future: The Ultimate Visual History, a stunning journey into the creation of this beloved time-traveling saga, which features hundreds of never-before-seen images from all three movies, along with rare concept art, storyboards, and
other visual treasures.

Few films have made an impact on popular culture like the Back to the Future trilogy. This deluxe, officially licensed book goes behind the scenes to tell the complete story of the making of these hugely popular movies and how the adventures of Marty McFly and Doc Brown became an international phenomenon.

The book also features candid exclusive interviews with key cast and crew members—including Michael J. Fox, Christopher Lloyd, Lea Thompson, Robert Zemeckis, Bob Gale, Steven Spielberg, Frank Marshall, Kathleen Kennedy, and more—and tells the complete story of the production of the movies, from the initial concept to the staging of iconic scenes such as the “Enchantment Under the Sea” dance and the hoverboard sequence. The book also delves into the wider Back to the Future universe, exploring the animated television show and Back to the Future: The Ride.

Produced in conjunction with Universal Pictures, this stunning volume is fully endorsed by director/co-creator Robert Zemeckis and producer/co-creator Bob Gale.

A thrilling journey into the creation of this dazzlingly original saga, Back to the Future: The Ultimate Visual History offers insightful reflections from the talent on both sides of the camera and includes a foreword by Michael J. Fox, a preface by Christopher Lloyd, an introduction by Bob Gale, and an afterword by Robert Zemeckis.

This book also delivers a range of surprises from the Universal Pictures archives and a wealth of special removable items, such as Marty McFly’s secret letter to Doc Brown, Doc’s sketch of the flux capacitor, and a lenticular version of Marty’s iconic family photograph.

As Michael J. Fox writes in his foreword, “Since Doc and Marty didn’t travel any further into the future than 2015, there are no more specific dates to look forward to, so I encourage you to read this book now.”

Comprehensive, compelling, and definitive, Back to the Future: The Ultimate Visual History is the book that fans have been waiting for!

To be in with a chance of winning one of 3 copies of Back to the Future: The Ultimate Visual History from our friends at Titan Books, just answer the question below.