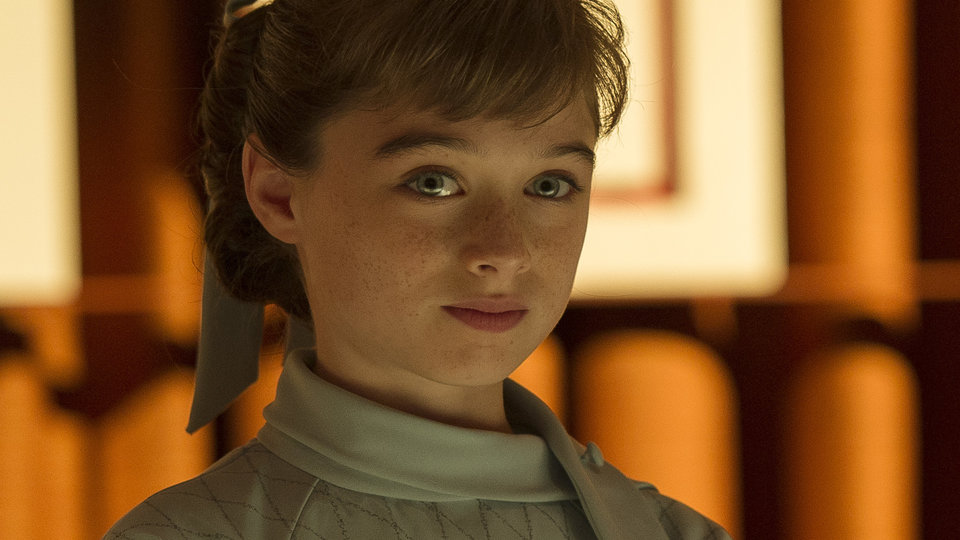 Bound by a shared destiny, former boy-genius Frank (Clooney), jaded by disillusionment, and Casey (Robertson), a bright, optimistic teen bursting with scientific curiosity, embark on a danger-filled mission to unearth the secrets of an enigmatic place somewhere in time and space known only as “Tomorrowland.” What they must do there changes the world—and them—forever.

Raffey Cassidy (who plays Athena in the movie) is a young actress with an already impressive and rapidly growing list of film credits. As the youngest ever actor to feature in Screen International’s Stars of Tomorrow, Raffey’s credits include Universal Pictures Snow White and the Huntsman, opposite Charlize Theron, Kristen Stewart and Chris Hemsworth, and Tim Burton’s Dark Shadows with Johnny Depp for Warner Brothers.

EF’s Jason caught up with Raffey to discuss her career, Disney’s Tomorrowland: A World Beyond and working with George Clooney and co.

I was actually away from home working on another film and I was asked to put myself on tape – I didn’t know much about the project. So my dad did the tape with me at the weekend and we sent it off. Then I think we did another tape, then I had a skype call, then an audition in London. Eventually I had a meeting with Brad Bird in London and then a screen test in LA. Then I waited! I think the whole thing took about six months before I got the part of Athena.

Athena is a very cool character and you did such an amazing job bringing her to life – what was she like to play?

She was so interesting to play – and cool, yes! I spent a lot of time working through different parts of her character with my acting coach and figuring out how she felt about things and the other characters and how she would react to situations. So when it came to filming I knew Athena quite well.  It was so exciting doing the stunt scenes and I loved training for them, so that was a big plus.

Did you have a good time working with George Clooney and did he give you any acting advice?

I had the best time –really! He was very funny and made the set relaxed and fun. It was more a case of being around him and watching him, that was really interesting and helpful. I didn’t think about it at the time but now I think about it, he did say things like ‘lets try this’ or ‘lets try doing it like this’, so I suppose maybe that was his way of giving advice.

You share a great dynamic with Britt Robertson – was she fun to work with onset?

Oh yes! We got to know each other really well and that helped when we were filming the scenes together, and we filmed a lot of scenes together. I miss her loads but we still keep in touch.

No-one can bring big visual stories like Tomorrowland to life quite like Disney – what’s your favourite Disney movie?

Hmm, does The Incredibles count? I love that film so much! Can I have two? I love Monster inc as well.

You’ve worked on some big movies already – which experience have you enjoyed the most?

Probably Tomorrowland because I got to do so much and spent such a lot of time working on it and getting to know everyone. Also I had never done stunts in a film… well not like I did in Tommorwland anyway. I keep talking about doing stunts don’t I! – sorry but I just loved doing them!

Would you ever like to do theatre work or are you just concentrating on film/TV at the moment?

Oh no, I love going to the theatre and would definitely like to do it if I ever get the chance.

Who are your acting heroes and what was your inspiration for getting into acting in the first place?

My inspiration is probably my brothers and sisters who are actors. I got my first job because I was waiting outside an audition room for my brother. Acting heroes include Britt Robertson (obviously!) and Saoirse Ronan – Hanna is one of my favourite films. I also love Imogen Poots, she was so funny in A Long Way Down.

What kind of movies and TV do you like watching?

I like lots of different kinds of film and TV, I’d probably watch anything once. But my favourites are probably comedies and period dramas. I watched An Inspector Calls on TV recently.

Well I’m really enjoying being back at school for the moment, but I would love to do something else. I just hope that’s it’s as fun as Tommorwland!

…finally, why should people go and see Tomorrowland: A World Beyond?

It’s fun and exciting with lots of action and funny stuff too. There’s lots of interesting characters and I think people will come out feeling optimistic. Every time I watch it I see something I didn’t see before so I think it’s worth watching more than once!

Best of luck for the future and thanks for taking the time to talk to us today Raffey.

Tomorrowland: A World Beyond is available on Disney Blu-RayTM & DVD now.