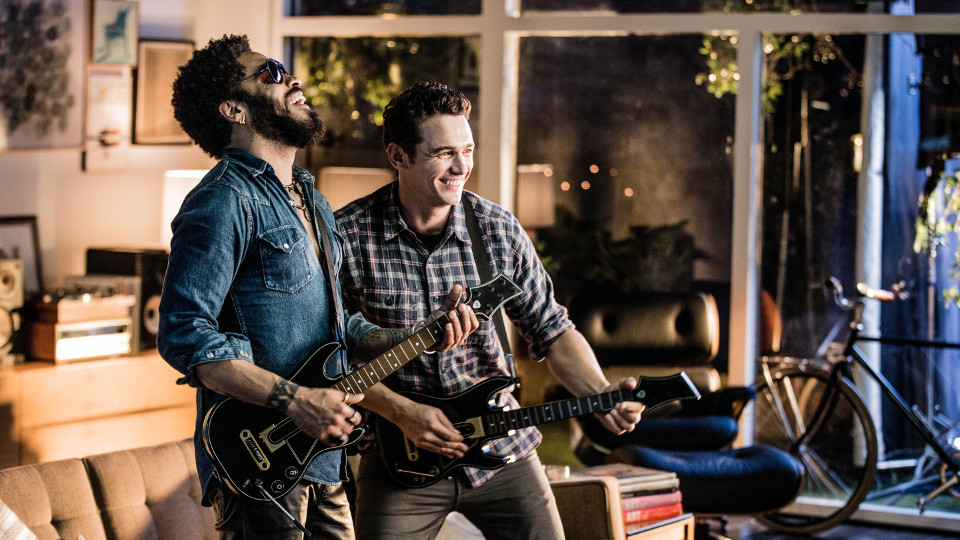 With just a couple weeks to go until the return of Guitar Hero, Activision has released a new live action trailer for Guitar Hero Live starring James Franco and Lenny Kravitz. Helmed by director Jonathan Krisel (Portlandia, SNL), the “Win the Crowd” video features the hilarious actor and the legendary rock-star going head-to-head to see who truly is the king of the music festival circuit in Guitar Hero Live.

The trailer features Kravitz’ hit track “Are You Gonna Go My Way,” which will also be playable in the game. Guitar Hero Live introduces two new ways to play the game: GH Live, in which you play in-front of real crowds who react to your performance, and GHTV, the world’s first playable music video network.

[quote by=”Tim Ellis, CMO, Activision Publishing, Inc.”]Guitar Hero Live gives you the chance to live out your rock star fantasy in front of a real audience that reacts to how you play, so watching James Franco and Lenny Kravitz challenging each other to win the crowd in the game brought that excitement to life in a really cool way. Some of the best moments captured on film were purely spontaneous between James and Lenny. They had great chemistry and had a lot of fun with the game. We just let them loose.[/quote]

GH Live is a live-action experience that aims to deliver the full emotional roller coaster of being on stage, with players performing in a real band, in front of real crowds, who react in real time to how well or poorly you play.

GHTV is a 24-hour playable music video network that lets fans play along to a continually-updated collection of official videos, from the newest releases to favourite hits. GHTV is a living, breathing platform that will continue to grow, serving as an ever-expanding source for music discovery while bringing the party atmosphere back to the living room.

Guitar Hero Live will be available on October 23rd on PlayStation 4, PlayStation 3, Xbox One, Xbox 360 and Wii U as well as iOS devices including iPad, iPhone and iPod Touch.

Check out the official Guitar Hero website for more information.