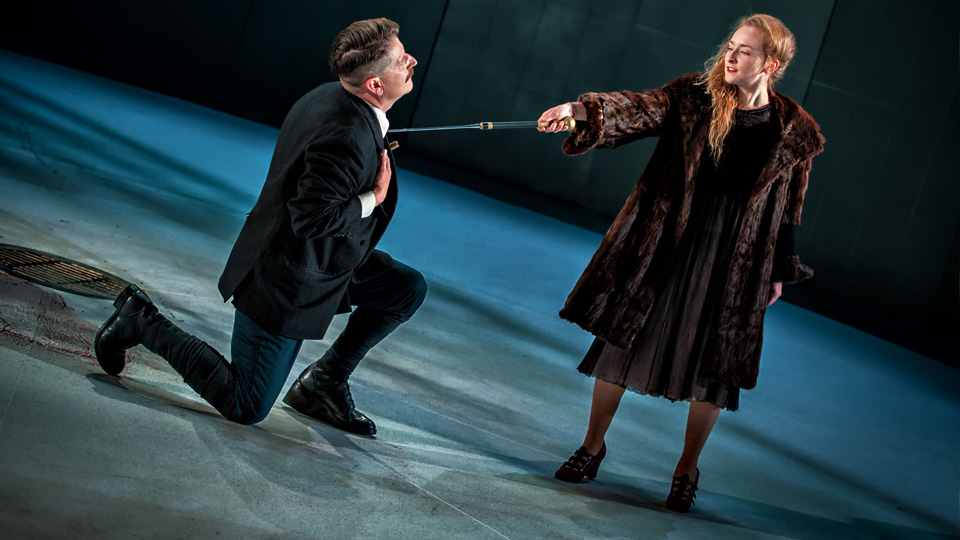 West Yorkshire Playhouse opens a new season with its first in-house Shakespeare production for some time. Richard III is arguably one of Shakespeare’s most brutal tragedies; a tale of jealousy and arch manipulation escalating in monstrous acts of violence, the play centres on a malcontent who will stop at nothing to gain access to the throne.

Richard III is one of Shakespeare’s longer plays, expansive and riddled with references to previous works. West Yorkshire Playhouse have respectfully abridged the text, focusing on its core elements whilst avoiding ruthless cutting. As such the play reaches cruising speed in its earliest moments, escalating to a powerful denouement in a record time of 160 minutes. This is lean Shakespeare with swiftness, performed at a rapid pace with snap scene changes.

Reece Dinsdale was directed under Mark Rosenblatt for 2014’s Untold Stories to great acclaim (see review) and the collaboration again proves to be a winning formula with Dinsdale as Richard III. His king is venomous and deliciously wicked, polished in a shell of sycophantic charm. Great consideration has been made in regard to Richard’s physical afflictions which are evident but not overly on the nose; a raised heel provides a clubbed foot and a twisted gait implies a malformed spine. His left hand is constantly pocketed, nestling a drill cane which is at once a sword and second a dagger. There are shadows of colonialism and Nazism in his salutations, assisted by a costume which is fiercely militarian with hair closely cropped at the temple. A sculpted moustache also implies an underlying vanity. It is a Richard of the 20th Century, recognisable in time yet historically archaic with the gravitas to absorb the iconography of Shakespeare’s character. In many ways Dinsdale approaches the role within a domestic sphere, playing the Duke as something of a seedy uncle, a snakeoil salesman of lies who extorts his disability as a barrier during conflict. A gleeful creature of insidious opportunities, Dinsdale’s Richard is also incredibly funny; a twisted sociopath with doe-eyes yet a tight, white smile, he instantly wins over the audience despite his heinous villainy. The performance is also wildly unpredictable, at once mildly camp followed by flashes of explosive fury. It is a highly commendable portrayal which is brave, energetic and refreshingly inventive.

In supporting roles Ben Addis has a business-like urgency and agreeably slick, yuppie manner as Buckingham. Dyfrig Morris, a familiar face from the last few seasons at West Yorkshire Playhouse, is memorably warm yet imposing as Hastings, with shades of a vexed 1970s MP. Dorothea Myer-Bennett and Rose Wadlaw are powerful and arresting as Queen Elizabeth and Lady Anne respectively. Jane Bertish brings a bohemic air and portent to Queen Margaret, with Olwen May providing a Victorian gothic shadow as the Duchess of York. Indeed, the entire ensemble shine in this production and bring colour and character to their parts.

Rosenblatt’s direction feels wholly unobtrusive, allowing the dialogue to shine with naturalistic movements that have purpose, pace and urgency.  The entire thrust stage of the Quarry Theatre, which is somewhat of an awkward and vast space, is well utilized, providing a wide scope with clear sight-lines to the drama. The oncoming battle from France is staged particularly stylishly, underscored by a creeping crescent of drummers whilst Richard soliloquizes in armour that evokes the style of a straight-jacket.

The play is particularly well visualised with a bold, dystopian production design from Conor Murphy. Towering flattage immediately provides a grand sense of scale to the court which towers over the performers and audience. Predominantly slate grey, it is an Orwellian setting with details which evoke a slaughterhouse or medical arena. A stainless steel drain in the centre of the stage acts as a grim reminder to the blood which is continually split and rinsed away. The drama is also exceptionally well lit, with a trio of inset circles of lighting truss flown above the stage, turning and lowering throughout the action and occasionally symbolising three fallen crowns.

Rosenblatt has created a Richard III which feels entirely fresh yet remains authentic to the majesty of Shakespeare’s writing. A wholly convincing world has been created in this production which provides a clarity to the storytelling and, importantly, a renewed accessibility to the text and its dense dialogue. With a mixture of styles from Victorian to present day, from World War overtones, to 1970s Post Office Telephones and hipster chinos, the times and places remain familiar yet anachronistic. However one element which remains constant is the use of a range of Northern accents which are expertly pitched.

Haunting and twisted yet darkly comic, Richard III is produced as a claret-coloured comic chiller, brought to the stage with a relentless bloodlust. There is a palpable feeling of unease in its violence, with piercing grief that is countered by a devilish charm from its leading actor. A visceral winner on every level, Richard III’s greatest success is its identifiable clarity as a story with clearly drawn characters in contemporary roles, providing a tangible dynamic for Shakespeare’s dialogue to shine. A tale of treachery, pernicious and malicious intent, Richard III is a memorable and startling new take on one of the finest tragedies.