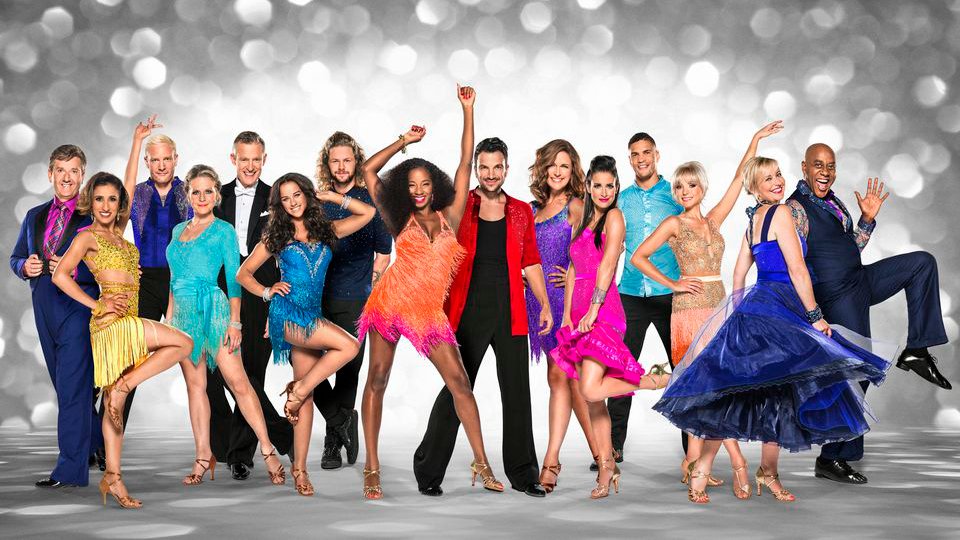 Last night saw the live shows begin as 6 couples took to the floor to perform their first routines of the series. Helen George topped the leaderboard with her pro partner Aljaž Skorjanec after scoring 29 out of 40. Right behind them in joint second were Anita Rani and Gleb Savchenko, and Kellie Bright and Kevin Clifton who both scored 27 out of 40 from the judges.

Daniel O’Donnell and Kristina Rihanoff followed behind on 24 points, Antony Ogogo and Oti Mabuse scored 21 while Carol Kirkwood and Pasha Kovalev struggled to impress and found themselves at the bottom of the leaderboard with just 16 points.

Tonight’s show kicked off with a spectacular pro group dance but how did the remaining 9 couples perform?

In his VT The Wanted member Jay McGuiness said he was so happy to be on the show. He seemed a little worried and incredibly nervous during training with Aliona. To help with his nerves Aliona took him to the Millenium Dome to the O2 Arena to remind him of how he feels when performing with his band.

The dance: They performed the Cha Cha for their first dance to ‘Reach Out, I’ll Be There’ by Human Nature. During the performance Jay looked the most relaxed he’s been so far in the show. It was an up tempo performance that was full of energy and perfect to open the show.

The comments: Len said Jay’s nerves didn’t show and that he was ‘Wanted’. Bruno said Jay ‘had the potential to be a great hit on the dance floor’ and he was ‘so pleased’. Craig agreed with Bruno and even smiled before asking for a bit more showmanship. Darcey said that Jay managed to ‘own the dance’ and that the performance was ‘brilliant’.

In her VT sports broadcaster Kirsty Gallacher said she was a ‘girly girl’ but that she couldn’t dance. In training her mum has been to watch her and give support.

The dance: They performed the Waltz for their first dance to ‘Vincent’ by Don McLean. It was a beautiful, slow performance that was full of emotion. Kirsty was obviously very nervous.

The comments: Bruno felt she was hanging onto Brendan a bit too much. Craig complained at the ‘stilted’ flow of steps. Darcey said there were ‘stunning moments’. Len pointed out that people forget the celebs are beginners and gave Kirsty encouragement for next week.

News reporter Jeremy Vine said he was excited and really wanted to learn from Karen. During training Jeremy couldn’t get out of the habit of writing down everything he learnt.

The dance: They performed the Cha Cha for their first dance to ‘September’ by Earth, Wind and Fire. Jeremy looked like he was having the time of his life during their performance. It was a fast routine and he did well to keep up with Karen.

The comments: Craig said Jeremy’s dancing could have made ‘the world dad dancing championship’. Darcey said it was ‘strangely fabulous’ and that Jeremy ‘threw everything into it’. Len said it was ‘a bit out of control’ but that Jeremy had ‘really gone for it’. Bruno said he ‘certainly danced to his own tune’ but was ‘funny’.

Corrie star Georgia May Foote was delighted to be partnered with Giovanni. In training Giovanni got Georgia a ‘Born to Win’ T-Shirt and tried to teach her to pronounce his name. The pair looked like they were having a few communication problems but lots of fun.

The dance: They performed the Jive for their first dance to ‘Dear Future Husband’ by Meghan Trainor. Georgia gave a very confident performance and was perfectly in time with Giovanni.

The comments: Darcey said it was an ‘incredibly impressive first dance’ and that they ‘matched’. Len said he ‘really liked it well done’. Bruno said they were ‘made for each other’ and the routine was ‘beautifully choreographed’. Craig said it ‘started very well’ but needed to ‘work on stamina’.

In his VT TV chef Ainsley said he was excited to be paired with Natalie. In training the pair have had so much fun and it looks like Natalie was managing to keep Ainsley focused. He also managed to cook her a meal.

The dance: They performed the Tango for their first dance to ‘Voulez Vous’ by Abba. We’ve never seen Ainsley looking so serious and focused as he did during their performance. However the funnier side of him had come out by the end.

The comments: Len agreed that he had never seen him manage to not smile for so long. Bruno said Ainsley had played lots of characters. Craig complained at lots of things but said the acting was ‘brilliant’. Darcey said she ‘loved the dramatic attitude’ but advised Ainsley to try and relax more.

Proms presenter Katie Derham said she had ‘hit the jackpot’ by being paired with Anton. The pair looked like they were getting on well during training. Katie took Anton to the Proms.

The dance: They performed the Jive for their first dance to ‘Roll Over Beethoven’ by Chuck Berry. They gave a faced paced routine packed with moves and fun. Katie looked really into it and there was no sign of nerves.

The comments: Bruno said he ‘couldn’t take his eyes off’ Katie. Craig complimented Anton but was picky about a few things, although he did say it was ‘the most sophisticated Jive they’ve ever had on the show. Darcey said ‘one classy Jive’. Len joked that Anton might realise that Strictly goes all the way to Christmas poking fun as his early exits in previous years.

In his VT athlete and presenter Iwan Thomas said he wouldn’t normally dance but was loving Strictly. He and Ola looked to be getting on well in training. Iwan is a bit of a perfectionist and was really putting the effort in. Iwan took Ola to Italy as he had to present the MotoGP from there.

The dance: They performed the Tango for their first dance to ‘Keep on Running’ by Spencer Davis Group. During their performance Iwan looked like he meant business but was clearly having a lot of fun at the same time. The routine was inspired by Iwan’s athletics career.

The comments: Craig had plenty of complaints and few positive things to say. Darcey said Iwan ‘started really well’ and said he needed to work on his control. Len said the routine lacked ‘attack’ but it was a ‘work in progress’. Bruno said Iwan needed to be ‘lighter on his feet’ and work on ‘being a character’.

Singer and Loose Women panelist said in her VT that she’s ‘giggly silly’ backstage and that she ‘missed performing’. In training the pair were having a lot of fun and Tristan tried to work on getting Jamelia to be more serious.

The dance: They performed the Waltz for their first dance to ‘Do Right Woman, Do Right Man’ by Aretha Franklin. They gave a lovely performance and Jamelia managed to keep hold of her laughter. There was definite chemistry between the pair.

The comments: Darcey said their Waltz was ‘very charming’ that started well but fell apart a bit to the end. Len agreed with Darcey and said a couple of mistakes had thrown her. Bruno said it ‘started like a dream’ and gave advice on how to cope with little mistakes. Craig picked fault at certain parts but said ‘well done’ overall.

In his VT Peter Andre said he was so happy to have Janette as his partner. In training they had a 90’s dance battle.

The dance: They performed the Cha Cha for their first dance to ‘Ain’t No Other Man’ by Christina Aguilera. They gave a confident performance with plenty of attitude. Peter looked to be absolutely loving the experience.

The comments: Len said it was ‘the best dance of the two nights’. Bruno said ‘fantastic’ and wanted more ‘smooth hip action’. Craig said he ‘really, really enjoyed it’, ‘sharp and clean’. Darcey said Peter was ‘overflowing with attitude’ and that she was ‘excited for next week’.

The overall leaderboard for the weekend is:

The scores from this week carry on to next week where the public will also get to vote for the first time.

Strictly Come Dancing continues next Saturday night (3rd Oct) on BBC One. Take a look at our gallery to see images of tonight’s couples in dress rehearsal earlier today: