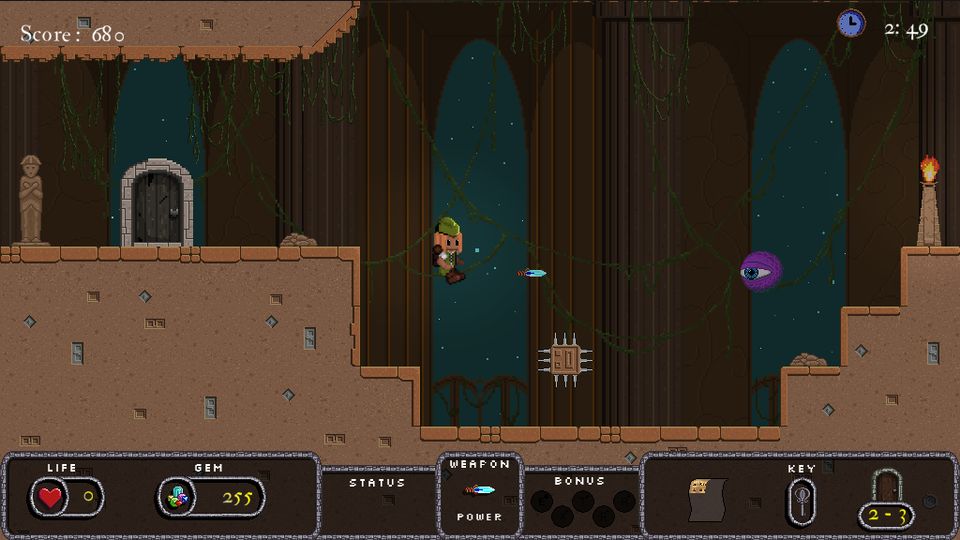 Pixel Lantern has announced that its highly challenging platforming game Bard’s Gold is available now via Steam (£5.99) for daring players.

Bard’s Gold takes inspiration from early 90’s platforming classics such as Rainbow Islands, Rick Dangerous and Erik, which at the time were popular on the Amiga and consoles. Bard’s Gold is slower paced than most current day platformers, but is extremely challenging. Players need to avoid enemies, traps and projectiles in order to progress. Being hit by any of them means instant death. There are no checkpoints and reaching the end of a level feels like a true victory. Difficult puzzles and towering bosses will have to be overcome to reach the evil goblin that stole the family treasure.

When players die not all is lost. By collecting gems and jewels, players can level up their character, which will help immensely in conquering the 2D dungeons. By finding skill books new powers and abilities are added. There is a “Roguelike-light” element to the game as players will be presented by a random selection of predesigned maps each time they retry a stage. With so many environments to explore and secrets to find, the game never grows old.

[quote by=”Erdem Sen, founder and game designer at Pixel Lantern”]We are delighted with Bard’s Gold launch on Steam. We strongly believe that the gaming community is ready for truly challenging gameplay experiences. Games such as Dark Souls have proven that a lot of players are yearning for old-school difficulty levels. We have just upped the bar as we think that Bard’s Gold is Steam’s most difficult game yet.[/quote]

Pixel Lantern is planning major updates after the game’s release and is eager to implement community feedback.

Check out the official Bard’s Gold website for more information.