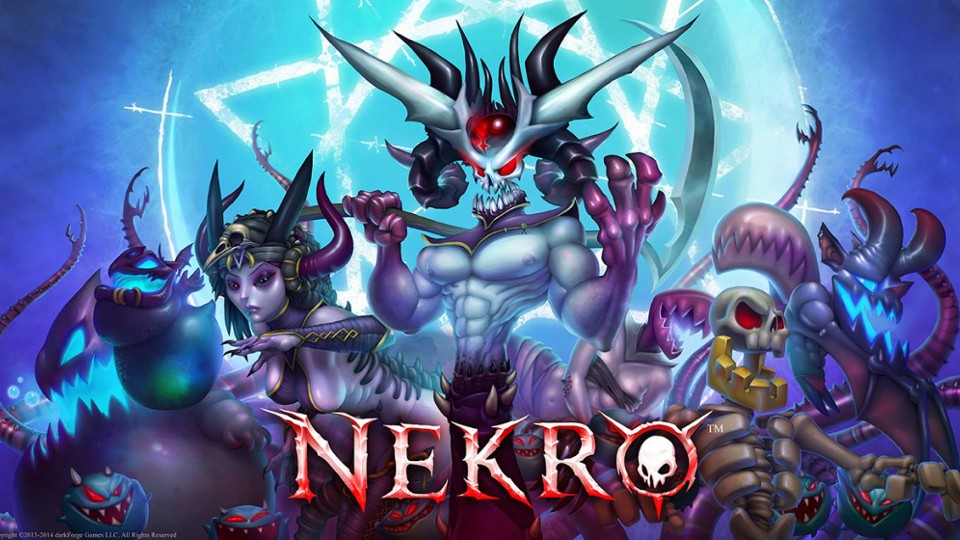 Nekro has been in development now for around 4 years at US-based indie developer DarkForge Games. The DarkForge team boast AAA experience gained working at Carbine Studios, Sony, Microsoft and Red 5 Studios. The project was Kickstarted back in 2012 and easily beat its funding goal of $100k with a final total just short of $160k.

The game moved onto Steam Early Access in 2014 and has been keen to get as much input from the community as possible. Development of the game has slipped a few times but now finally seems to be nearing the end with a release due later this year.

In Nekro you play as a powerful Necromancer who is out for revenge against a King who betrayed you. The game features randomly generated levels and is a mix of Action-RPG and Strategy genres.

When starting a new campaign the game currently lets you choose one of three different Necromancer specialisations – Alchemist, Grimm Keeper and Outcast. A fourth is planned for a future update. The Alchemist specialises in healing, Grimm Keeper in grenades while the Outcast is a brawler. Each comes with their own creepy look as well as unique main, alternate and combo attacks.

In addition you must also choose a Scourge type for your Necromancer from a choice of Explosive, Hellfire and Tremor. These abilities give different Area-Of-Effect damage and healing. Your choices for Necromancer and Scourge stay with you for the duration of your campaign so it pays to choose wisely for your preferred style of play.

By default the game is played with the mouse and keyboard with the WASD keys used for movement, number keys for abilities and the mouse for attacking plus controlling the camera. Killing enemies and tapping the F key feasts on their corpses. This results in them exploding in a satisfying fountain of gore and allows you to heal your injuries and take their blood.

In between levels you can spend your earned Power and Sin points. Power can be spent on your stats which are Health, Damage, Blood, Move Speed and Trinket Slot as well as new skills. Sins are used to upgrade your Summons or acquire new ones.

Summons get crazier as you get further into the game and become more powerful. To summon creatures you need to use the blood you’ve acquired with corpses of your fallen enemies. Your summons will fight for you and you can also give them orders to attack specific targets or retreat.

Conquering the levels is a careful balance of killing enemies, building blood and summoning your creatures. You take part in the combat while ordering your troops around and it gets chaotic fast. While all this is going on you need to keep topping your health up and make quick decisions about whether to summon, retreat, fight or feast.

Levels have different goals such as surviving waves of enemies, fighting over an area king-of-the-hill style or just destroying everything in your path. There are also traps and hazards to avoid as well as boss fights to overcome which are the hardest parts of the game.

The game doesn’t take itself too seriously and is packed full of humour and this is present in everything from the wonderful narration to the enemy deaths. The levels are also scattered with nods to other popular games.

After the lengthy development Nekro is shaping up to be heaps of demonic fun. We look forward to checking out the final release which also promises multiplayer. Fans of Action-RPGs and Strategy games will want to keep an eye on this one.

To find out more about the game check out the official Nekro website or head to the Nekro Steam page.