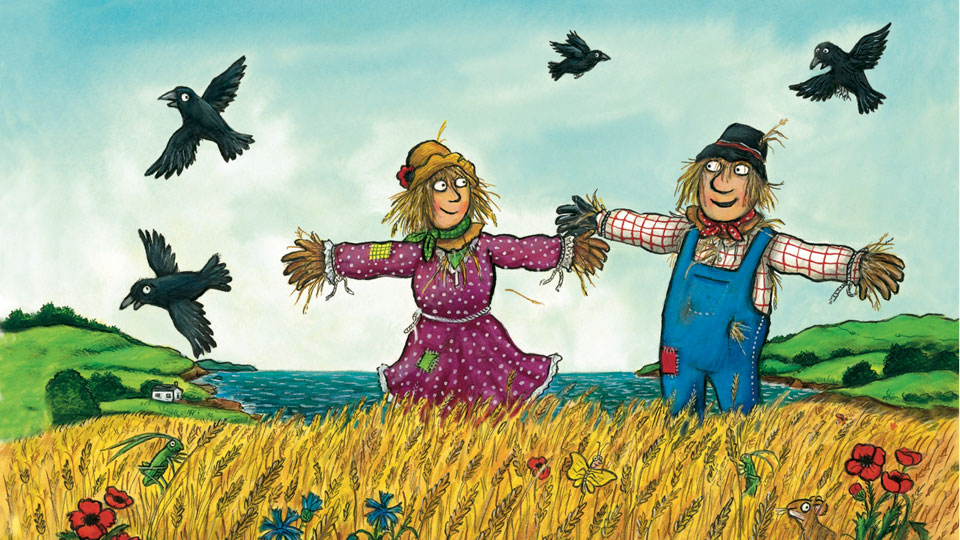 Award-winning company Scamp Theatre will bring several of Julia Donaldson and Axel Scheffler’s best-loved children’s books to the stage in 2015, including the world stage premiere of their most recent book The Scarecrows’ Wedding at Edinburgh Fringe Festival and then on a UK tour. Stick Man will also tour the UK throughout Spring and Summer, and Tiddler and other Terrific Tales will play a Summer Season at Leicester Square Theatre.

Stick Man sees a world outside the family tree that is a dangerous place for him. A dog wants to play fetch with him, a swan builds a nest with him and he even ends up on a fire! How will Stick Man ever get back to the family tree? Passing through the seasons and culminating in a joyful Christmas celebration, Stick Man is a fantastick show which will delight all branches of the family tree! Touching, funny and utterly original, this enchanting adaptation features three actors and a one-man-band playing a host of colourful characters and animals to magically re-tell Stick Man’s adventures.

Stick Man is directed by Sally Cookson with design by Katie Sykes, lighting by Elanor Higgins and music by Benji Bower. It is produced by Scamp Theatre in association with Watford Palace Theatre. Stick Man is performed by Oliver Grant, Rachel Winters and Alex Tosh.

Stick Man is also currently being adapted into an animated film to be aired on BBC1 this Christmas.

After runs at Edinburgh Fringe Festival and touring the UK, Tiddler and Other Terrific Tales will have its first West End season at Leicester Square Theatre from Saturday 11 July to Monday 31st August.

Tiddler and other Terrific Tales weaves together live music, puppetry and a whole host of colourful characters from some of the best-loved titles by Julia Donaldson including Tiddler, Monkey Puzzle, The Smartest Giant in Town and A Squash and a Squeeze. Funky moves, toe tapping tunes and giggles are guaranteed as audiences are taken under the sea, out on the farm and into the jungle! Tiddler and other Terrific Tales is the perfect treat for children of 3+ and their families and friends.

Tiddler and other Terrific Tales is delightfully directed by Sally Cookson with dazzling design by Katie Sykes, funky tunes by Benji Bower and lush lighting by Elanor Higgins. It is performed by Joseph Carey, Peta Maurice and Darren Seed.

Scamp Theatre is also proud to present their latest production, a truly heart-warming adaptation of The Scarecrows’ Wedding, at Edinburgh Fringe Festival and then on tour. Betty O’Barley and Harry O’Hay are excellent scarecrows (they scare a lot of crows). Harry loves Betty, and Betty loves Harry – so they decide to get married. Harry sets off to search for their wedding day essentials including a dress of feathers, a bunch of flowers and a necklace made from shells.

However, when the farmer notices he is missing a scarecrow, he replaces Harry with the devilishly smooth but dangerous Reginald Rake. Dashing, daring and ever so cool, can Reginald persuade Betty that he is the scarecrow for her? Will Harry make it back in the nick of time before Reginald ruins their special day? The Scarecrows’ Wedding is directed by Eva Sampson, with design by James Button, lighting by Elanor Higgins and music by Darren Clark. The Scarecrows’ Wedding is produced by Scamp Theatre in association with Watford Palace Theatre.

See www.scamptheatre.com for more details, or to book.